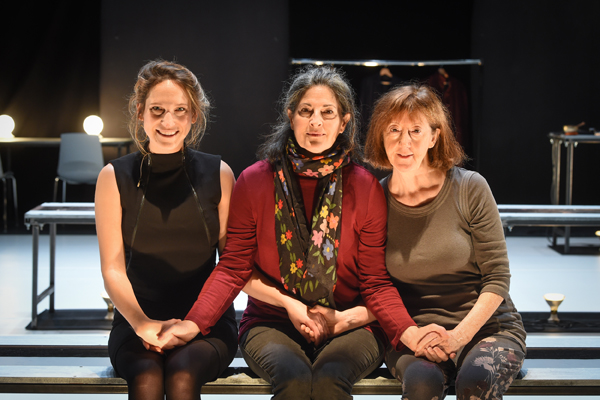 TOGETHER: Beckett Women: Ceremonies of Departure

MAYBE it’s an indicator of the under-representation of women in serious art that the entrance of three female actors for Beckett Women: Ceremonies of Departure immediately conjures up The Three Witches of Macbeth, nevertheless, that was my reaction at The Mac on Thursday night.
The production, brought to Belfast by the renowned Poets Theatre in Boston, is part of the growing cultural exchange being created by the Sister Cities programme, and is directed by one of the world’s leading Becketteers, Bob Scanlan, a personal friend of the enigmatic playwright.
In a Q and A following the show with Dr Kathryn White from Ulster University – herself a respected Beckett scholar – the director thanked the audience for its attention during the “difficult evening” adding “you’re not here to be entertained”. Arriving new to Beckett I was unaware of how ‘unentertaining’ the evening would be but in a positive way – I think.
First let me explain that I don’t often write in the first person but such is my lack of knowledge of Beckett and the personal reaction this staging evinced, that I find I have no option. The production, made up of four short plays: Not I; Footfalls; Rockaby and Come & Go, was difficult, uncomfortable and at times baffling. However I found my ‘inner voices’ – also discussed by the director in the succeeding Q and A – asking questions of me from the start, my reactions, inhibitions, fears and expectations. Quite a lot for a rainy Thursday night.
First of the plays, Not I, features a woman voicing a stream of consciousness torrent of phrases and words, twisted laughter and screams, delivered in English then repeated in French, Beckett’s adopted language. In this production the actress – Amanda Gann – is lit through a large muslin cloth, while a video camera – operated by a representation of Death – is trained on her bright red lips and played centre stage on a large screen. Automatically I fix on the figure, backlit and deathly still as the disembodied red lips move on screen. However as the passage moves on I’m drawn ever more to the woman’s mouth, tentatively at first such is its intimacy before gradually focusing fully on the bright red lips fading in and out of black and white. The woman, who has been mute all her life, has found her voice, perhaps in some trauma but this woman in meltdown, where do you look, do you avert your eyes or stare? Or is the disjointed, broken prose the manifestation of her broken mind, but if so why is the French – which I don’t speak – as discomfiting as the English?
A fractured mind also features in Footfalls, this time that of May, a woman in her 40s. Again it’s some trauma that has compounded her misery as she converses with her unseen mother, or possibly her ghost. Pacing and pacing, nine steps each direction May, struggling with her demons since childhood, has been dealing with her mother’s decline and is entirely alone before stepping off ‘it all’ having ‘never been done with revolving it all in her mind’.
Themes of loneliness and death, mothers and daughters continue into Rockaby, again superbly reflected with video camera and shadow as an old woman is rocked in a chair by Death’s representation, who has stayed quietly in our awareness onstage throughout. A recorded narrative which plays as the dying woman insists on ‘More!’ moves into an Irish accent, or, I find myself asking, was it Irish from the start? Echoes of Beckett’s own mother perhaps but as the waiting for ‘the end of a long day’ wears on I find myself shuddering violently in a way I have never experienced before. I can make out little plot, structure is fleeting at best and a narrative thread is all but non-existent. Themes of death, isolation, misery and madness are apparent but I left the venue puzzled, provoked, nervous and disturbed, and I couldn’t exactly tell you why.
Beckett’s Women: Ceremonies of Departure runs until November 12.