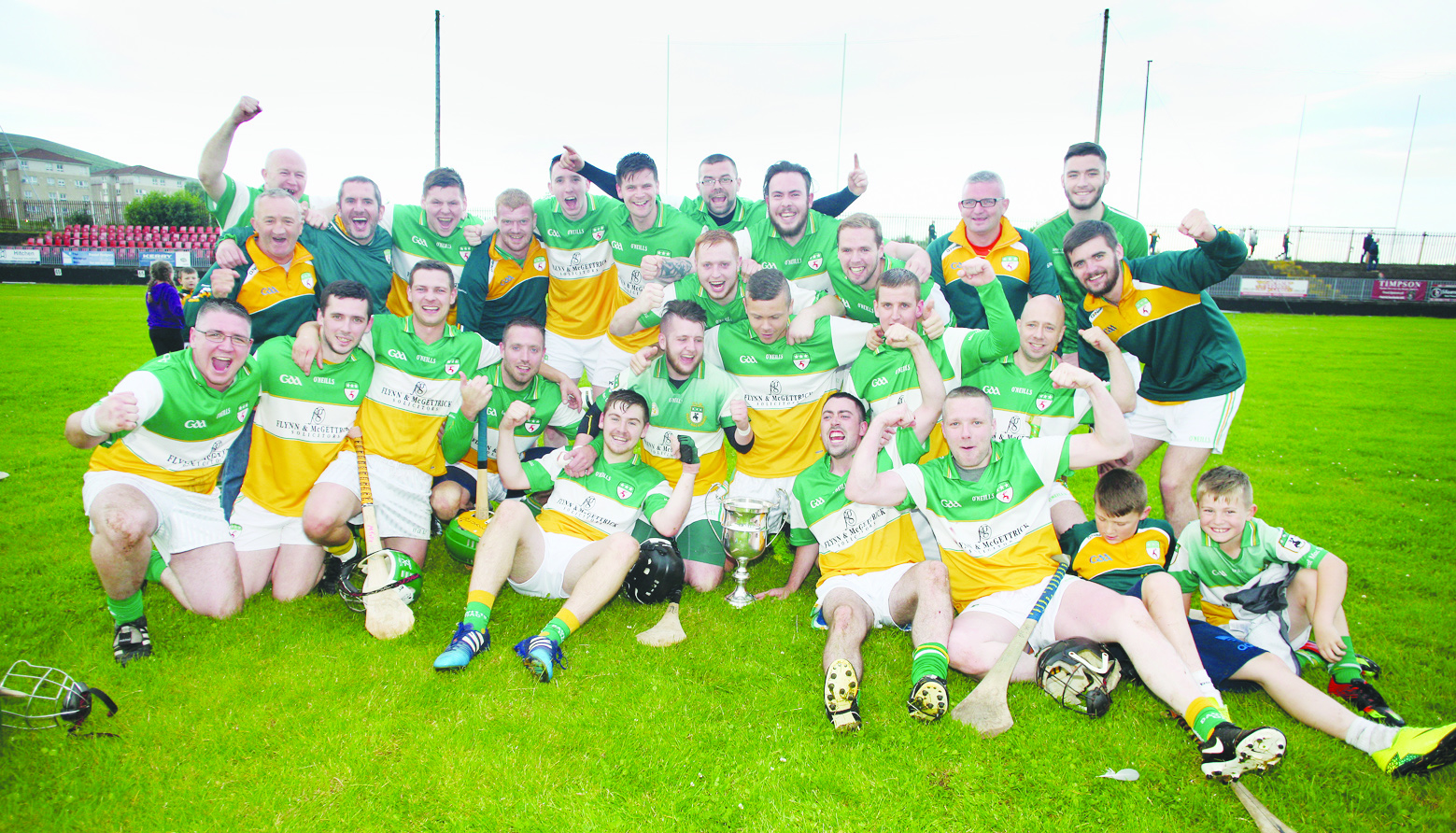 DESPITE going 21 minutes without a score in the second period of Saturday night’s Junior B Championship Hurling final at Sarsfield’s, Davitt’s prevailed to retain their title and make it successive final victories against St Agnes’ with a 1-10 to 1-9 win.

The men from the Falls Road started the final as they meant to go on and by the ninth minute lead by four points. Colm McKee struck a point from range with less than a minute on the clock and turned provider a minute later with Rory McEvoy racing to the corner to set-up Sean McIllhatton who doubled the Davitt’s lead.

McEvoy then peeled away from danger to strike a third point with Christopher Gallagher scoring the fourth after a brave solo run to make it 0-4 to no score with almost 10 minutes gone.

St Agnes’ were slow starters in their semi-final victory over O’Donnells and it took them 10 minutes to register a score through Conor Compston after Caoimhin McNeill had cleared the initial danger and Diarmuid Kelly played a superb ball into Compston. Christopher McKee then converted a free to half the deficit - 0-4 to 0-2.

Both sides then traded scores with Gallagher increasing Davitt’s lead to three only for McKee to reply at the other end after good work from centre-half back Ronan Carroll.

After a quiet 10-minute period, Davitt’s stretched their lead going into the break with Colm McKee firing over from Sean McIllhatton’s pass and then Stephen McGivern floating the ball over to make it 0-7 to 0-3 after 23 minutes.

A minute before the break, Conor McKee converted his second-free of the evening to bring his personal tally to three and reduce arrears to the same margin, but deep into first-half injury-time Stephen McGivern opted to take a point from a 21-yard free to leave the score 0-8 to 0-4 at the break.

St Agnes’ came out with a new found hunger after the restart and opened the second-half scoring with a Conor McKee point and halved the deficit with a Kevin Grieve point on 36 minutes. Grieve - who was introduced on 32 minutes - struck his second score from the set-piece on 39 minutes to leave a point between the sides and the teams were tied up at 0-8 seconds later when first-half substitute Conor McLean fired over the bar.

Both sides pushed hard to take the lead but a scoreless 12-minute period followed as well as some wayward shooting and a few flare ups which resulted in referee Thomas McGilligan flashing his yellow card to try and take the sting out of the incidents.

On 51 minutes Davitt’s regained the lead and hit their first point of the second period when Conor McKee picked out Chris Gallagher who struck over the bar. This was followed by Michael Og Rowntree converting a free and with six minutes remaining, McKee linked up with Gallagher again to great effect as the wing-forward lashed the ball beyond Christopher Fay in the St Agnes’ goal to make it 1-10 to 0-8.

Kevin Grieve replied at the other end with a point but St Agnes’ needed a goal to give themselves a lifeline in the game.

Referee, Thomas McGilligan announced four additional minutes and less than a minute into that Kevin Grieve won the ball in the square and made room for the shot, blasting past Chris McNally into the top corner to give St Agnes’ a much needed boost and make it 1-10 to 1-9.

The Aggies pushed hard for an equaliser which they probably would have merited, but their luck was out and Davitt’s withheld the late pressure to hang on for victory and retain the Junior B Championship, setting up a Junior Championship quarter-final clash with Robert Emmet’s Cushendun in Cushendall on Saturday evening (5pm throw-in).

Davitt’s manager Gerard McNally admitted that he expected a tough game with St Agnes’ but was just thankful his side retained the Junior B title.

The Falls Road men looked in trouble having surrendered a four point half-time lead and going 21 minutes without a score. However, Chris Gallagher’s goal sealed back to back Junior B successes for Davitts much to his manager’s delight.

“Every match we play against St Agnes’ is close,” said McNally.

“It was nip and tuck in the second half and thankfully we just held on in the end to get the win.”

McNally felt there was a 10-minute period during the second-half when it looked as though it wasn’t going to be his side’s night, but he praised the team as they regrouped.

“I was very nervous when St Agnes’ scored the late goal,” admitted McNally.

“There was probably a 10-minute period in the second-half when I thought it was slipping away from us and we reset and made a few changes and the boys went again.

“There was a lot of heart and desire in the end to get us over the line.”

Davitts’ win secures a berth in the Junior Championship proper and a quarter-final clash with Division Three side, Cushendun on Saturday but McNally is keen to enjoy his side’s success before they turn their attention to Cushendun.

“We just want to enjoy the win and then we will turn our attention to Robert Emmet’s in the quarter-final,” he added.

Gallagher proved hard to handle for the St Agnes’ back line all evening with three points from play along with his 54th minute strike which was taken brilliantly. Teammate Rory McEvoy also put in an impressive shift with Ronan Carroll and Kevin Grieve both hurling well for St Agnes’.