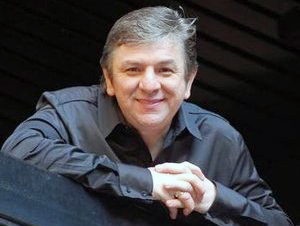 A still from the movie ‘Alive From The Divis Flats’ and, inset, Hugo Straney

Growing up in Divis Flats is the subject of a documentary to be screened at the Movie House on the Dublin Road next week.

Alive From The Divis Flats is the story of Hugo Straney, an Irish Canadian from Divis who has been living in Toronto for over four decades. The film focuses on the lives of Hugo and two other men who recount their memories of life in and around the flats in the 1960s and 70s.

The screening and Q&A session is being held as part of the Belfast Homecoming 2015 event (October 7-10) when 150 diaspora leaders will take part in the three-day agenda of visits, discussions and debates.

Hugo, a radio DJ and well-known showbusiness personality in Toronto, will be flying in from Canada for the event. We caught up with him this week for a chat about Alive From The Divis Flats, a look at Hugo’s past, a childhood spent during the dark days of the Troubles and a disaster in social housing: the Divis Flats.

“I had been talking to Eleanor (McGrath, the Director) about my life in Divis flats and she was fascinated and said she wanted to make a movie about it,” he explained. “I told her there was nobody else from the flats living in Toronto but gave her contact details for Jim Geddis, whose brother Stephen was killed by a plastic bullet in Divis. Jim was living in Ontario at the time The next thing, the documentary was about us growing up in Divis. The third guy involved is Stephen Armstrong, a Donegall Road Protestant living in Canada who gives his take on Divis.

“There is a good bit of comedy and entertainment from us as we recall memories of living there and perform songs, including Joe McDonnell, about my cousin Joseph. Joseph features in the documentary as a person, a father, a brother, a cousin, in family photos and that.

“The documentary is what I would like people to know about Divis. Everyone knows the famous quote from the soldier saying the place was a hellhole and a slum but I like to remember it as my mother did, she always said good people lived in Divis and good people came from Divis. It’s the place that moulded me and I hope I convey that in the documentary.”

The screening and Q&A will be on Wednesday, October 7 at 5.30pm at the Movie House on the Dublin Road. Admission is free. To book tickets for the event log on to http://bit.ly/1LrwnQZ