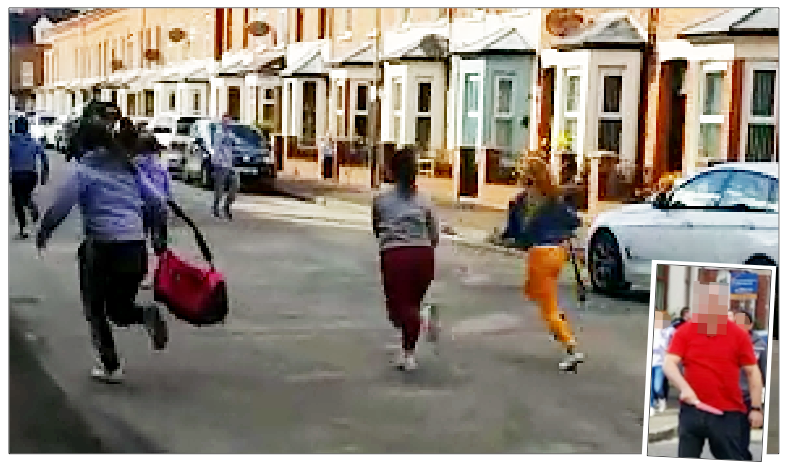 Members of the gang flee, one carrying a hurl, while (inset) a resident is pictured with the kitchen knife taken from one of the girls

Brave North Belfast residents who confronted a knife-wielding gang of girls have spoken of their shock at having to take weapons from children as young as 11.

A ten-inch kitchen knife was taken off one girl in the Newington invasion before the gang – who were also armed with craft knives, hurls and golf clubs – ran off when police arrived on the scene. One local man, who does not want to be identified, said he had never seen anything like it.

“They were shouting about looking for revenge for something that happened the night before in Alexandra Park and saying things like they were from West Belfast and they would do what they wanted,” he said. “I couldn’t believe it. One of my neighbours took a ten-inch pink kitchen knife off one of them. I phoned the police right away and when I took the phone out to film what was going on they all ran up Pacific Avenue”

The gang split up after fleeing, with one group running through the Waterworks and the other disappearing into the Cliftonville area. Police then moved into the area in large numbers and calm was restored.

The local man said he believed the incident was linked to an altercation that took place in Alexandra Park on Saturday night.

“There was an incident where a young girl from West Belfast was assaulted and that led to what we saw on Sunday. There must have been between 14 and 16 girls here at one point. The police spoke to them later but they must have thrown the other weapons away. We were told they were from the Falls and Divis.”

Police confirmed they deployed after receiving reports of gang activity.

A spokesman said: “Police responded to reports of large groups of young females in area carrying offensive weapons, including knives, in the area of Antrim Road and Waterworks. This is a serious matter and could lead to death or serious injury.”

Police say investigations are ongoing and prosecutions are being sought. Local Sinn Féin Councillor Mary Ellen Campbell said she was concerned that violence was taking place close to interfaces.

“The reoccurring incidents of gangs of young people travelling to this area for fights are very disturbing,” she said. “Reports of knives being carried by some raise further alarm and the PSNI must act to prevent these situations developing.”

Cllr Campbell said after petrol bombs being thrown into Tigers Bay on Sunday night, the appearance of gangs on the streets was a worrying development.

“This area is close to several interfaces and there is a danger that violence could spill over to impact upon these sensitive areas.”