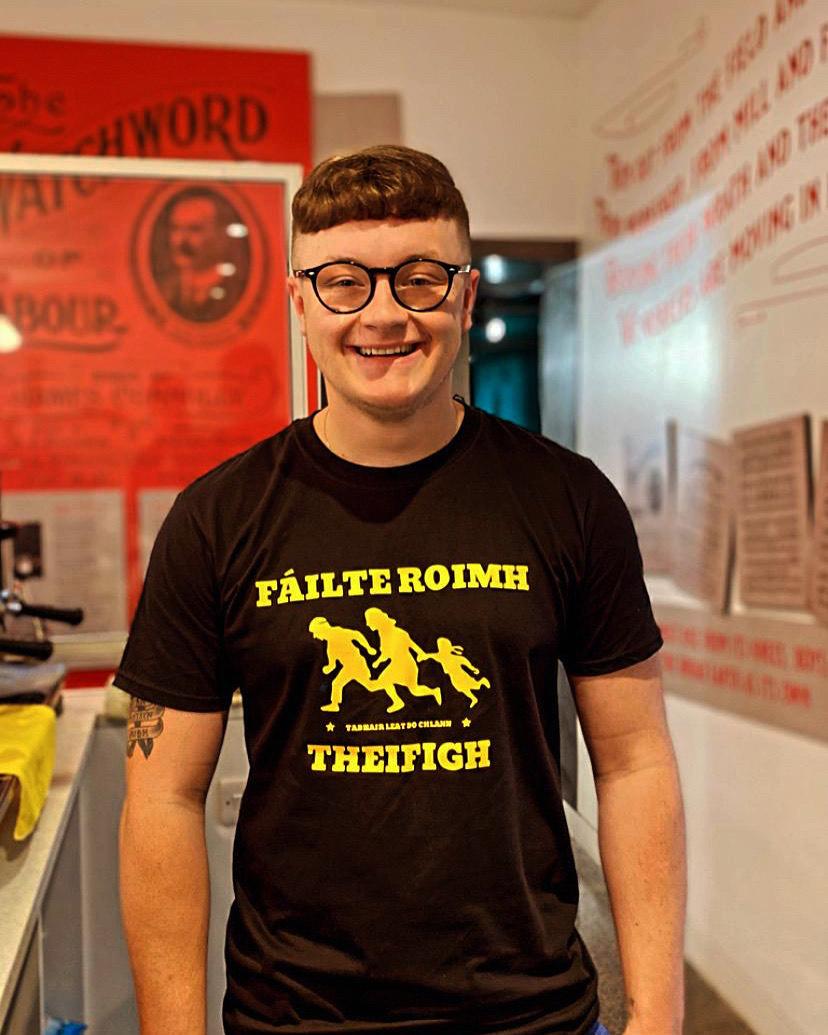 Aodhán Ó hAdhmaill (25) had designed a t-shirt to show his support for refugees and asylum seekers and to highlight the need for both the Irish and British governments to do more to assist those fleeing war and destitution.

After posting a picture of it on Instagram, Aodhán was inundated with requests to purchase the t-shirt and decided to put its popularity to good use.

Aodhán teamed up with local business Kolormaster, with all proceeds from every t-shirt sold going towards the Refugee Community Kitchen (RFK) in Calais. Established in 2015, it has provided over three million people with hot and nutritional meals but due to the impact of Covid-19 needs donations to rebuild its stock.

“Given the resumption of vitriol by the mainstream media, encouraged and facilitated by the political right, I had this t-shirt made to show my support for refugees and asylum seekers and to highlight the need for both the Irish and British Governments to do more to assist those fleeing war and destitution,’ explained Aodhán.

“After posting on Instagram, a number of people got in contact with me asking about getting a t-shirt.

“Given the level of response, I decided to get a load printed, sell them and donate all proceeds to assist the rebuilding of the RFK in Calais, France.

“I would like to thank Kolormaster who are providing the t-shirts for the lowest possible prices in order to maximise the funds raised.

“RCK was established in late 2015, when the refugee crisis was at its height, when the dehumanising language from the media was at its worst and when European governments either sat on their hands or built walls. Since then, they have provided hot, nutritional meals for close to three million people.

“Over the last two months, RCK have re-established operations in Calais but, given the impact of Covid-19, they have been unable to rely on the strength of their many thousand volunteers. Instead, they are asking for donations to rebuild their stock and get back to what they do best.”

If you are interested in purchasing a t-shirt, please get in touch with Aodhán via Facebook Messenger, Instagram DM or e-mail. T-shirts are priced at £20 and payments can be made by PayPal, Revolut or Bank Transfer.

Delivery is available within the greater Belfast area. Postage to Ireland and the UK is included within price. Postage to further afield will naturally incur a higher cost.

You can also collect your order from Áras Uí Chonghaile on the Falls Road.