Family say attacks are a case of mistaken identity 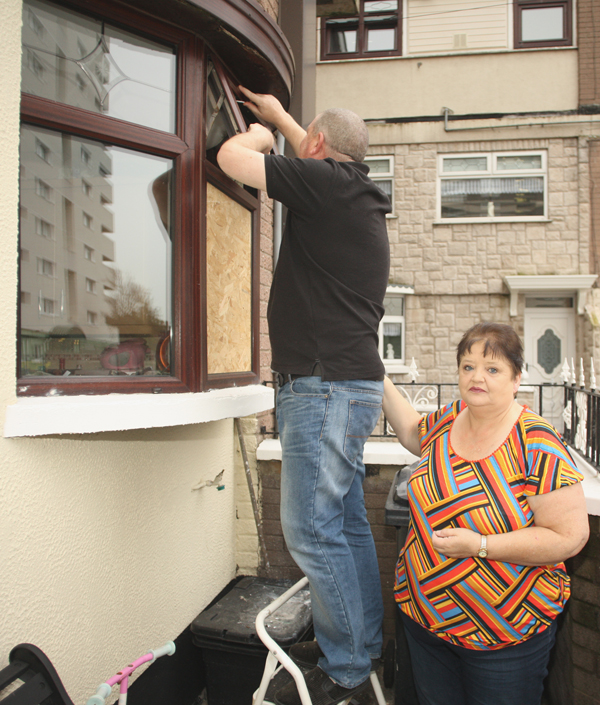 A NEW Lodge family whose home was attacked following threats over a debt allegedly owed by their son have said that the perpetrators have targeted the wrong people.

Last month, an intruder entered the home of Phyllis Gregg and her partner Sean O’Neill in Duncairn Parade, demanding that they pay an alleged debt of £4,400.

On Friday, windows at their home were smashed by a hooded figure who closely resembled the man who invaded the property.

Speaking to the North Belfast News, Mr O’Neill told how the man had threatened to kill his son in a case of mistaken identity.

“We heard the banging at the door and then when my daughter answered it a guy pushed past her and came into the living room,” he said.

“He was hooded, and had a scarf covering his face. He said ‘tell your son he owes us £4,400 and we’re taking him up to Slieve Donard if you don’t pay it and he knows what will happen’.

“The first thing I did was phone my son and asked him if he was in trouble with anybody, but he promised me he wasn’t.

“He’s 38, he works full-time as a baker, his partner is in full-time work, and he has two kids – he’s settled. He doesn’t even live in the New Lodge.

“If you ask anybody in the area they’ll tell you we’re quiet people.
They’ve obviously got the house mixed up. Something similar happened in New Lodge Place where they went to the wrong house initially, but then went to the right address a few days later.”

He continued: “On Friday night around at half-eight, we heard the crash when the kitchen window was put in.

“We’re worried about what is coming next – is it going to be a petrol bomb through the window? They’ve threatened us and now they’re attacking the house. It’s escalating.

“My daughter is 19, she said she doesn’t want to stay here anymore. She’ll stay out in friend’s houses until the last possible minute.”

Ms Gregg, whose parents lived at the property for decades, said that this is the first time any trouble has come to the door.

“We told him that he had got the wrong house and that he was in the wrong place,” she said.

“I asked him what my son’s name was – I told him if my son owed him money then he could tell me son’s name, but he just started to back out. He then took off towards the Antrim Road.

“My mummy and daddy lived here before us. It’s our family home and we’ve never had any trouble. They must not be from the area because everyone around here knows us.

“I don’t even want to sit on the house on my own now. When I’m in the house I want out of it, and when I’m outside I want back into the house. I don’t know where I am. I just don’t want to be here.”

Local Sinn Féin Councillor JJ Magee, who has assisted the family since the attack, said: “This is a disgraceful attack on a family who are very upstanding residents. These individuals who think that they can intimidate our community are wrong.

“The New Lodge community is a strong community who will stand together against theses thugs. Anyone with information should pass it on to PSNI. We must not accept these bullies in our community.”