Ferguson plans to announce his arrival on the national stage 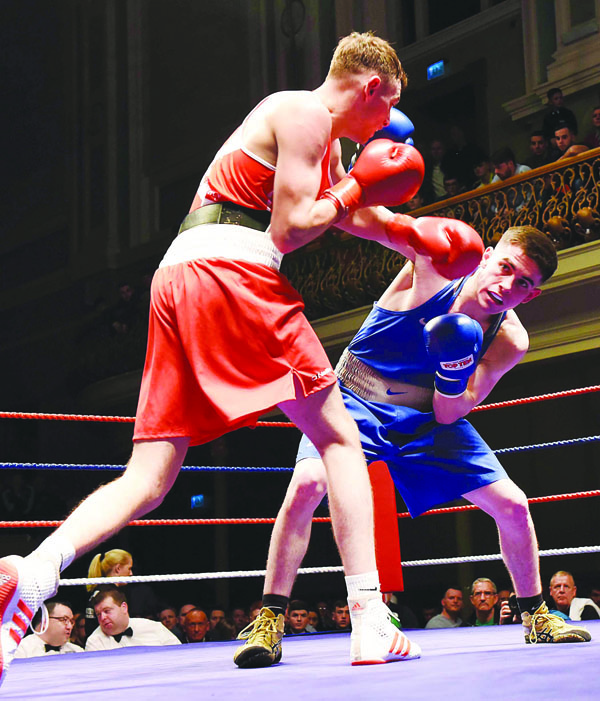 Caoimhin Ferguson (blue) lost out to Sean McComb in the Ulster Elite final back in November, but has taken confidence from his performance that night as he gets ready to face Wayne Kelly in the national final on Saturday night

IT will be quite a first season at Elite level for Caoimhin Ferguson should he manage to overcome Wayne Kelly in Saturday’s Irish Elite light-welterweight final.

The 19 year-old had a fine run in the Ulster Elites back in November before losing out in the final to Sean McComb, but served notice to his talents that night in the Ulster Hall.

While McComb is set to captain the NI team at the Commonwealth Games in April, the door was left ajar for a new 64kg Irish champion and Ferguson hopes to step into the breach against Portlaoise’s Kelly who lost out in the 2017 final.

“It’s a massive week for me,” he agreed.

“Since I started boxing as a kid, it was always a dream to get to an Irish final, but now I’ve gone even further and got to an Irish Elite final, hopefully I can win it.

“This is my first season as an Elite boxer. It started pretty well for me (in the Ulsters). I beat Vinny Esler and that was a good win. I then fought Bernaldo (Marime) who was the Ulster champion at the time and then gave Sean a good run for his money.

“I lost out that time, but I think I showed I belong up there.

“Now I’m into the (national) final, I’m hoping to get the win and prove I belong up there with the best.”

It will be a novel pairing, not just in terms of Elite finals’ night, but overall as Ferguson and Kelly have not met in the ring before.

That could make it a cagey three rounds, but Ferguson has watched the Laois man and believes he has the tools to keep the title in West Belfast.

“He is older than me, so in my younger days he was always a couple of age groups above me,” he said.

“I have seen him fight Sean McComb though and I am confident in my boxing ability that I can win.”

Ferguson is now representing Clonard, having recently made the switch from Gleann and he says he has settled into his new surroundings well.

“I would like to thank Gleann for everything they did for me, but I think it was just time to move on,” he explained.

“My old coach, Donal got a new job and I just thought Clonard would be better for my career and the best option as I had to go somewhere.

“I looked at Clonard and saw the likes of Conor Quinn (who won the flyweight title by walkover due to the absence of the Commonwealth Games-bound Brendan Irvine) and Gerard French, so I thought it would be a good club to be in.”

Ferguson enjoyed a unanimous victory over Castlebar’s Colm Quinn at the weekend, while Kelly won his semi-final in identical fashion against Paulstown’s Keith Flavin, so this final is well poised.

While it will be a huge occasion for Ferguson on what is always a special night at the National Stadium, he feels this is the perfect stage to announce himself to the wider Irish boxing public.

“The more you win, the more they’ll take notice. I gave Sean McComb a good fight to go to the Commonwealths and opened a lot of eyes there.

“I know I’m young, only 19, fighting at Elite level, but I think I’m starting to show I belong there so hopefully I get the win this week.”