Fitzsimons backs call for ‘B’ Championship 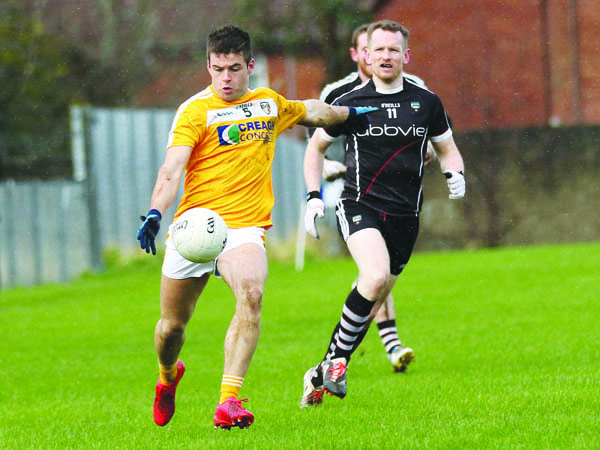 AS the gap between the elite teams and the chasing pack in Gaelic football continues to widen, Antrim senior football manager Frank Fitzsimons feels the option of introducing some form of a tiered system to the Championship must be explored.

Antrim exited the Ulster Championship at the hands of Donegal, suffering a 16-point defeat in Ballybofey.

The one-sided nature of the early Championship games has led to renewed calls for a tiered Championship structure with former Antrim captain Kevin Brady among those speaking in favour of such proposals.

Speaking to Belfast Media Group last year, Fitzsimons spoke out against talks of a ‘B’ Championship.

Now however, Fitzsimons feels a change would help breath new life into the Championship after a lacklustre campaign so far.

“People are calling for a two-tiered Championship. When you look at some of the results you have to wonder if that is the way to go?

“My own view, I would have been against it in the past but I actually think something needs to be done,” said Fitzsimons.

“When you look at the Dublins, Donegals, Tyrones and Mayos of this world, we are years behind them. Not talent-wise, but in terms of finance and structure. They can have players doing five nights and you can see the conveyor belt coming through in those counties.

“I would have said that you don’t want to lose the Ulster Championship and the build up to it.

“If they do a ‘B’ competition, or whatever they want to call it and do it right with the same promotion and the semi-finals and finals in Croke Park, I don’t see why it wouldn’t help teams like ourselves.

Antrim face Sligo in the first round of the football Qualifiers this Saturday at Markievicz Park (throw-in 5pm) as they seek to bounce back from that heavy loss to Donegal.

After claiming a narrow win over the Yeatsmen in their ill-fated Division Three campaign in the Spring, Antrim won’t fear their trip to Connacht on Saturday.

However, Fitzsimons feels his side will need to be more ruthless if they are to enjoy a prolonged summer after passing up two goal-scoring opportunities against Donegal.

“Every one of those teams would have been a tough draw. I am not just saying that,” said Fitzsimons.

“People might say you should be beating this team or that team, but any team away from home is going to be tough.

“We sat the players down and spoke to them. We laid it out to them what kind of hours the Donegal lads are putting in.

“It isn’t for everybody, but this is what we have to do if we want to compete at that level. The quicker we see that the better.

“You have to look at the positives in those first 20 or 25 minutes. We can make excuses and say that ‘Fitzy’ (Matthew Fitzpatrick) went off – that is like them losing Michael Murphy.

“In the second half, I think we maybe waved the white flag too early – that’s where the mental toughness comes in.”

He added: “We had a spell when we could have scored two or three goals. If you are taking those chances, you aren’t playing in Division Four. That’s the difference.

“It is wee things like that we need to work on. You would have put money on Fitzy and CJ (McGourty) scoring those chances.

“When the top teams smell a weakness, they put those chances away.

“To be fair, I think we have a smashing bunch of players and they know what they have to do. It is up to them to push on.”

Despite suffering an ankle injury in the Donegal game, Fitzsimons is confident the aforementioned Fitzpatrick will be fit in time to line out against Sligo.

The St John’s ace was walking with the aid of a crutch after the game but no long-term damage was sustained.

Conor Murray, who missed the Donegal game through suspension, is also available while younger brother Ryan could feature after recovering from a shoulder injury.

Glenavy’s Owen Gallagher returned to the panel prior to the Ulster Championship opener and is another who is vying for a starting berth.

When the sides met in Corrigan Park, Antrim were coming off the back of arguably their worst performance in several years when losing to Offaly.

Normally 0-11 wouldn’t be enough to win any game, but Sligo only posted 1-7 as several of their forwards failed to fire on the day.

Antrim cannot rely on their opponents doing them any favours on Saturday and Markievicz Park is traditionally a tough venue for teams to visit in the Qualifiers.

The Saffrons have been averaging less than 13 points per game throughout this season. If they are to avoid an early Championship exit, they will need to create and take more chances.

Sligo, with home advantage, will make life difficult, but Antrim have more than enough talent to progress.