Food bank demand in North Belfast soars for yet another Christmas 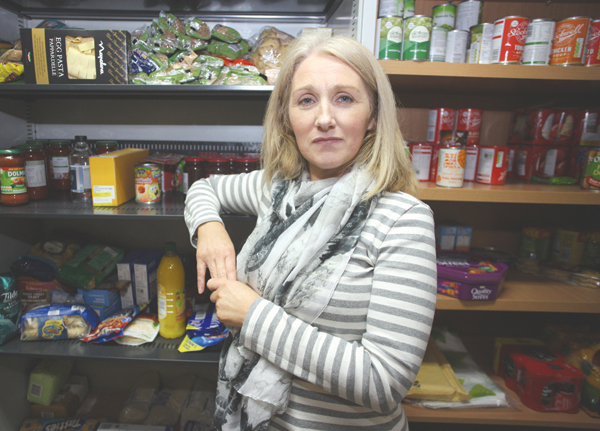 THE demand for food for those in need this Christmas is as high as ever before after another tough year for many people in North Belfast.
A year of drastic changes to welfare reform and the roll-out of the controversial universal credit in November has left more and more people in need of essential food products over the upcoming Christmas period.
The annual drive by North Belfast Advice Partnership and Ligoniel Improvement Association is now on for donations for this year’s initiative to help local families across North Belfast.
Sinead McKinley, who is helping co-ordinating this year’s food drive, said this year’s appeal is their most important ever.
“This year once again we have been inundated with requests for food parcels and Christmas hampers,” she explained.
“It has been a really tough year for families, with all the different changes to welfare policy on top of the higher cost of food and living generally and the uncertainty around Brexit, it means more people are in food poverty.
“Utility bills are also getting higher yet benefits have been frozen for four years.
“There is also the cruel Universal Credit which I believe has resulted mainly in an increased demand for the food bank.
“People are on a five-week wait for the changeover in their benefits which has put them in debt coming up to Christmas. There is no mitigation payment for that crossover period because the Assembly collapsed before they could pass the legislation.”
Started in 2014, the local food bank drive resulted in a record number of people receiving hampers last Christmas, with a total of 200 hampers delivered to individuals and families in need.
Once again, Sinead is appealing for long-life food products, fresh fruit and vegetables, dairy products and festive toys and gifts amongst the vital donations for this year’s appeal.
“We want to build on last year’s successful food bank drive success which resulted in 200 Christmas hampers delivered to those in need.
“This year we expect the demand to be much higher and we will continue to work with our partners in St Vincent de Paul, St Patrick’s Soup Kitchen, Haven Outreach and Oasis Food Bank on the Shankill to meet demand.
“We want to maximise resources to support a bigger group of people. Food is always the priority – it frees up other money for them to pay bills and spend a few pounds at Christmas time.
“Christmas hampers are vital so that local families get through the festive period. There are extra costs because more people are off and stay at home which means extra heating bills.
“This year has been so tough for everyone, especially low-paid workers, those on benefits and those affected by universal credit.
“It has been really bad. Unfortunately, it is a sign of the times that food banks will become the norm for so many people.
“Universal Credit is so cruel and will continue to roll out to so many more people. Soup kitchens and homeless charities are a lifeline for people. It is a helping hand for people.
“I would appeal to local people to once again support this year’s food bank appeal- people in North Belfast are so generous when it comes to donating at Christmas.”

Items can be donated to this year’s Food Bank appeal by bringing them to the Wolfhill Centre in Ligoniel, or they can be dropped into a number of other community centres including Ardoyne Association (Etna Drive), Ashton Centre (Churchill Street), Tar Isteach (Antrim Road), Vine Centre (Crumlin Road) and Ballysillan Community Forum (Crumlin Road).