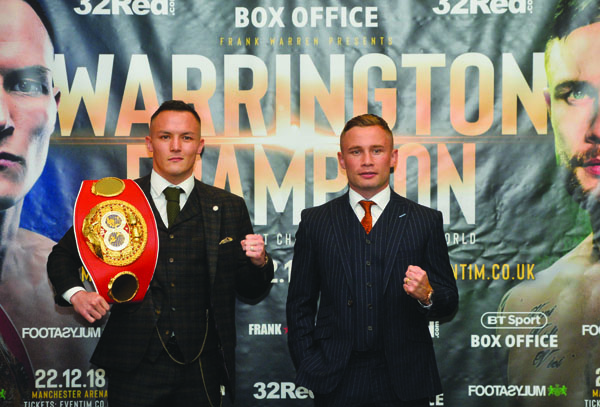 IBF featherweight champion, Josh Warrington and Carl Frampton pose for the cameras at the Clayton Hotel yesterday at a press conference ahead of their showdown at the Manchester Arena on December 22

CARL Frampton has promised to send the ‘Jackal Army’ home from Manchester with an early Christmas present when he takes on IBF featherweight champion, Josh Warrington on December22.
Tickets have been flying out for the BT Sport Box Office showdown with almost three-quarters snapped up when they went on sale on Wednesday with his fans set to return to the city where he unified the super-bantamweight division against Scott Quigg back in 2016.
The build-up to that fight was tetchy to say the least with the jibes back-and-forth over ‘A Sides’, dressing rooms and fan-base, but the mood is much more convivial this time as evidenced by their final leg of a three-city press tour in Belfast’s Clayton Hotel yesterday.
The respect between both men is clear for all to see, but that doesn’t mean there will be a lack of edge on fight night as both aim to sign off on 2018 with a world title.
“I’ve always talked about the support I have and I’m very grateful for that,” said Frampton, who is aiming to win his fourth world title belt having already claimed the IBF and WBA super-bantamweight titles as-well-as the WBA featherweigh crown.
“I believe I’m one of the best-supported fighters in world boxing and to be a featherweight to have that support…. Usually, it’s the heavier weights have that support, but Josh has a brilliant fan-base as well.
“I know it’s very close to Christmas and budgets will be tight, but I’m really hoping people will come out and support me because I’ll send them home very happy for Christmas.”
Warrington, whose grandfather hailed from the Falls Road, is determined not to let that happen.
Having scored an upset, yet very worthy win over Lee Selby at Elland Road back in May to land the belt, he is not intending to let his reign end in his first defence.
Many would have taken a much more straightforward assignment for their first fight after winning the title, but the 27 year-old Leeds man wants to punch his ticket to the mega-fights against the division’s other champions.
“I’ve been keeping an eye on Carl for the last few years,” he said.
“I’ve watched his career as a fan and then as a potential opponent.
“I believe I’m in the best shape of my life and I’m approaching my peak years.
“When I won the title back in May, straight away in the dressing room after I was thinking ‘who’s next?’.”
He must be given credit for accepting the Frampton challenge, but while this is certainly high-risk, victory is high-reward and he is predicting a classic between the pair that will make the boxing world sit up and take notice.
“I think this could be the fight of the year,” he opined.
“It’s one of those fights that don’t come around that often. You get big fights with all the build-up and don’t deliver, but I believe this one has all the ingredients to be one of those that is talked about for a long time.”
Frampton echoed those sentiments and while his past PPV outing against Quigg didn’t quite catch fire, he believes this will be more akin two his two classic battles against Leo Santa Cruz.
Warrington’s all-action style is not dissimilar to the Mexican’s and Frampton believes this could be another thrilling encounter, one that could pave the way to a trilogy match-up with Santa Cruz next year.
He was quick to deflect questions about what is next, instead insisting he will need to be fully focused and firing on all cylinders on December 22 to get himself back to the to of the division.
“It’s going to very a very good fight, an exciting fight, a tough fight, but I’m looking forward to it,” he commented.
“I feel like I’m harping on a bit, but a year ago I was being written off, I was ‘over the hill’, but I think my last two performances (against Nonito Donaire and Luke Jackson) have been two of my better performances of my career and I feel the time is right now to win back what would be my fourth world title and go from there.
“But I’m under no illusions – this is going to be a seriously hard fight. I know Josh well enough and I don’t believe there’s an ounce of quit in him so that’s going to make it exciting.”