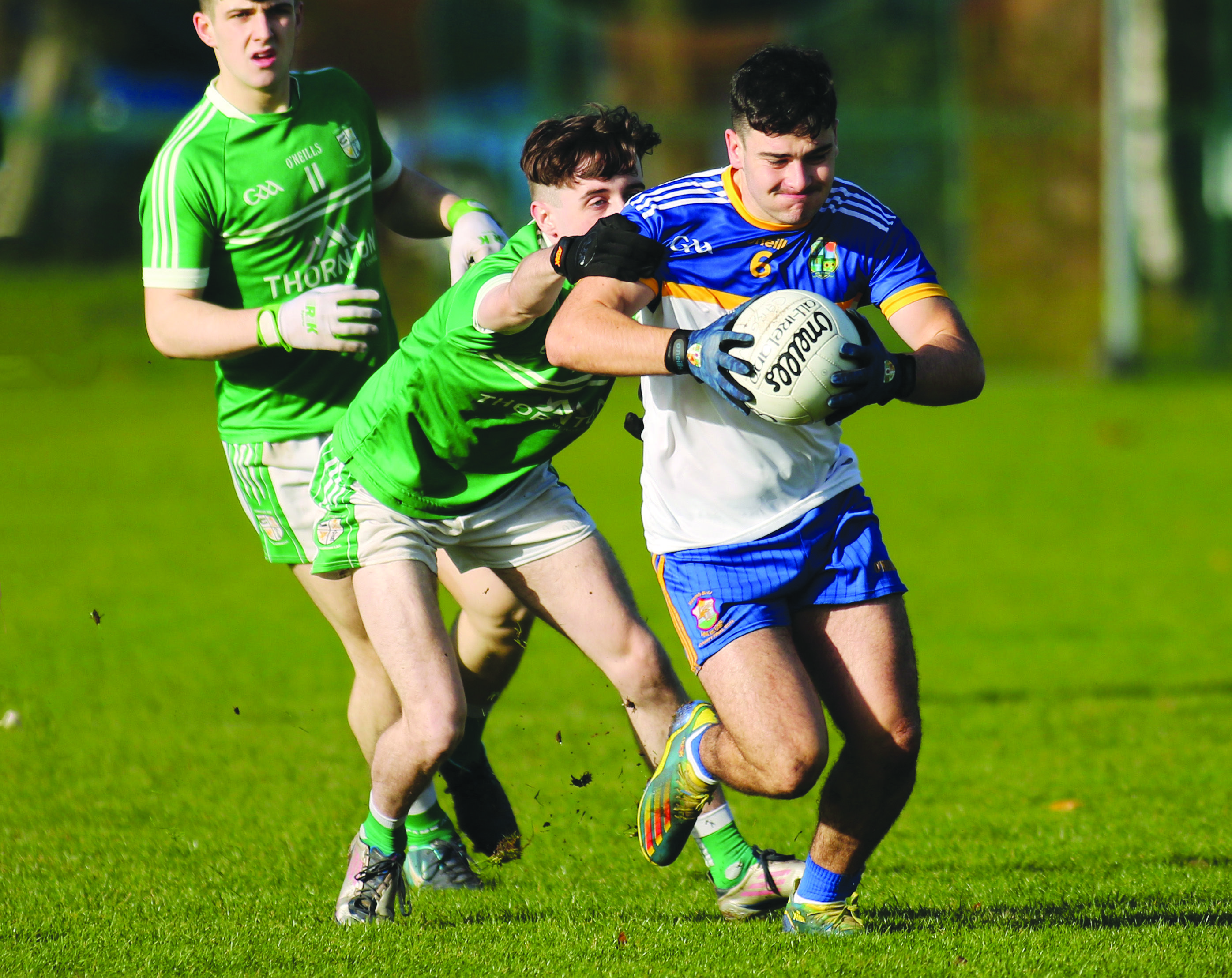 A HAT-TRICK of underage football titles is on offer for St Brigid’s as they aim to claim the Antrim U20 crown against Moneyglass at Dunsilly on Saturday.

The South Belfast side managed to get the better of Cargin in last week’s semi-final in a low-scoring affair that went to extra-time, but their ability to find the net proved decisive as their bid to add to the U15 and U17 titles this year remained on course.

Moneyglass got the measure of Aghagallon in Saturday’s other semi-final with the St Ergnat’s man inspired by youngster Tiernan McCormack who scored two goals off the bench, while Tyler Cassidy and James McCormick netted the others in their 4-7 to 1-12 victory.

The sides met earlier in the league St Brigid’s romping to victory, but it is anticipated that Moneyglass will be a lot stronger for Saturday’s final with their entire squad available, so joint-manager Ruairi O’Neill insists nothing can be read into that and anticipates another tough battle ahead.

“We played them here a couple of months ago in the league, but they were missing six or seven at the time so we got the win over them,” he recalled after Saturday’s win at Musgrave Park.

“I think I’d be right in saying they beat that same Cargin team in the league earlier in the year. So they are a good side, well drilled and have a couple of players who are very dangerous, so I think you’ll see similar to what you saw today: a very defensive and let’s see how it ends up.”

Goals appeared to be the theme in both semi-finals and could well be again this week.
Winter football is a different environment to even just weeks ago as games can become a test of endurance and St Brigid’s will be very happy with the manner of their semi-final win.

They had to dig it out and when temporarily reduced to 14 in extra-time when trailing by two, things looked bleak, but they found a way.

“The old adage is that goals win games and the boys dug in,” said O’Neill.

“It was a tough game against a very good team. It was very defensive, 13 versus 13 at the back, but we got there.

“Goals win games and were lucky enough to get a couple last weekend against St Gall’s, got a couple there today. We like to think that St Brigid’s football is a style where we like get the ball in quick to get those chances. We did and thankfully we took them.”

This Saturday sees the Antrim U20 Football Championship Finals 🏐🏆

A relative clean bill of health for the South Belfast side is a plus, but with this being the last game this team will play in 2022, it is a case of emptying the tank in order to finish the year on a high.

Playing through the pain barrier was not an issue for some against Cargin and the willingness to dig in was a major reason for their win.

“A couple of boys were carrying injuries but they played through it,” O’Neill reported.

“These boys are warriors and they just go out and do it. Big Donal Bradley played through a hip injury there, came to us (management) and said to get him back on. He was on five seconds and had the ball in the net, but that’s this team - good lads who just don’t know when to stop.”

While senior success has so far eluded St Brigid’s, the signs are very promising in the club with so much underage success this year and that hat-trick of titles would bode very well for the future.

They will be favourites on Saturday, but that matters little once the ball is thrown-in and in Moneyglass they will face a stern test, but have proven they have the ability to bounce back from adversity on and off the pitch.

“The club motto is ‘Mol an Óige’ where we are always looking to develop the youth,” O’Neill stressed.

“Unfortunately, we haven’t managed to translate that fully into senior success but today is about getting too a final. We’ve won U15, U17 so it would be great to add U20, but there’s another game to go yet.

“That is a great group of lads there and we’ve been lucky to bring the minors up with them.

“The one thing I would say is that this team’s been through a lot this year. They lost a very good friend in Fionntán McGarvey at the start of the year and have just played their hearts out there, the way Fionntan used to play. I’m delighted for them so let’s hope the can take one more step, but there’s a very good team waiting for us.”

The B final between Sarsfield’s and Creggan will be first up at Dunsilly on Saturday with a 12pm start.

A 52nd minute goal from Sean Clarke was to prove crucial as the Paddies forced extra-time and then edged out Portglenone 1-11 to 0-13 in last weekend’s semi-final at Kelly Park.

It was just as close in the other semi-final as a Sean Duffin-inspired Creggan edged neighbours Tír na nÓg 3-8 to 3-7.