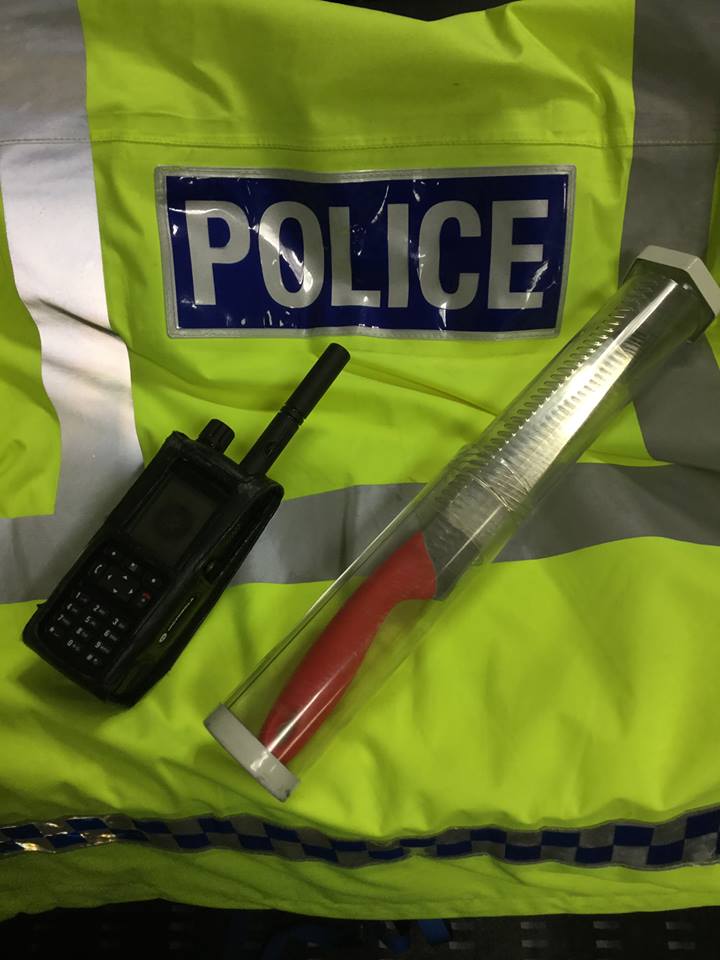 OFF THE STREETS: A knife was seized from one young person on Friday night in Glengormley

Traders and residents are living ‘under threat’ after a weekend of anti-social behaviour in Glengormley.
Police reported ‘unprecedented’ groups of young people gathering in the O’Neill Road area on Friday night, close to the entrance of V36 Valley Park. A 17-year-old male was arrested for possession of a knife.
Large crowds also gathered in the notorious ‘hotspot’ between the former RUC barracks and Farmley estate. Last year, the North Belfast News revealed 100 incidents in just six months were reported to police regarding anti-social behaviour in the area.
On Sunday night, a car was set on fire in the Valley Park.
Local Alliance Councillor John Blair was in the area on Friday night and described the latest bout of anti-social behaviour as ‘intolerable’ and called for urgent action to tackle the problem.
“I was in the centre of Glengormley at around 8.30pm on Friday night,” he explained.
“I spoke to people working in the area who told me they felt very threatened and intimidated by what was going on.
“No one who works at night time providing services and entertainment in Glengormley should work under threat and that is the reality of the situation now.
“It is not a working environment for anybody. It is intolerable for local residents and traders.
“I was also informed of very serious disorder on the O’Neill Road at the entrance of the park which is of great concern to local residents and the proximity of trouble to the Children’s Hospice.
“Time has passed for funded schemes for up to 20 young people in Glengormley. The time has arrived to acknowledge that this is a much bigger problem. Help is required from other areas from which many of these young people travel from to conduct their anti-social behaviour.
“Police are also responsible to ‘police’ the problem out of the area in the interests of local residents and traders.
“There is also a parental responsibility also. This problem needs to be sorted out in the hope that we don’t have a much more serious incident than a knife simply being found.
I would call on other agencies in other parts of North Belfast and Antrim and Newtownabbey to provide for young people in the areas they are from so that these young people are less likely to travel to Glengormley at weekends to participate in anti-social behaviour and put themselves at considerable risk.”
Responding to the incidents Chief Inspector Davidson said: “Over the past weekend calls were made to police by local residents and retailers expressing concern about young person’s gathering in and around Glengormley village.
“Officers responded to each report and dealt with a number of different incidents involving these youths at various locations.
“CCTV footage of the incidents is currently being examined by police to identify those involved and investigations are ongoing.
“We are liaising with local schools, community representatives, elected members, retailers and our Police and Community Safety Partnership to ensure that a collaborative approach is progressed in our efforts to prevent such anti-social behaviour and detect those persons involved.
“I would like to take this opportunity to impress upon our young people that behaving like this, fighting and leaving residents afraid in their own homes, is just unacceptable.
“Parents should also be aware that this is occurring and help to prevent young people from becoming involved or caught up in these activities.
“We will be conducting regular and targeted patrolling of Glengormley and outlying areas in the coming weeks and young people are advised that we will be adopting a robust approach in making those amenable for such behaviour.”