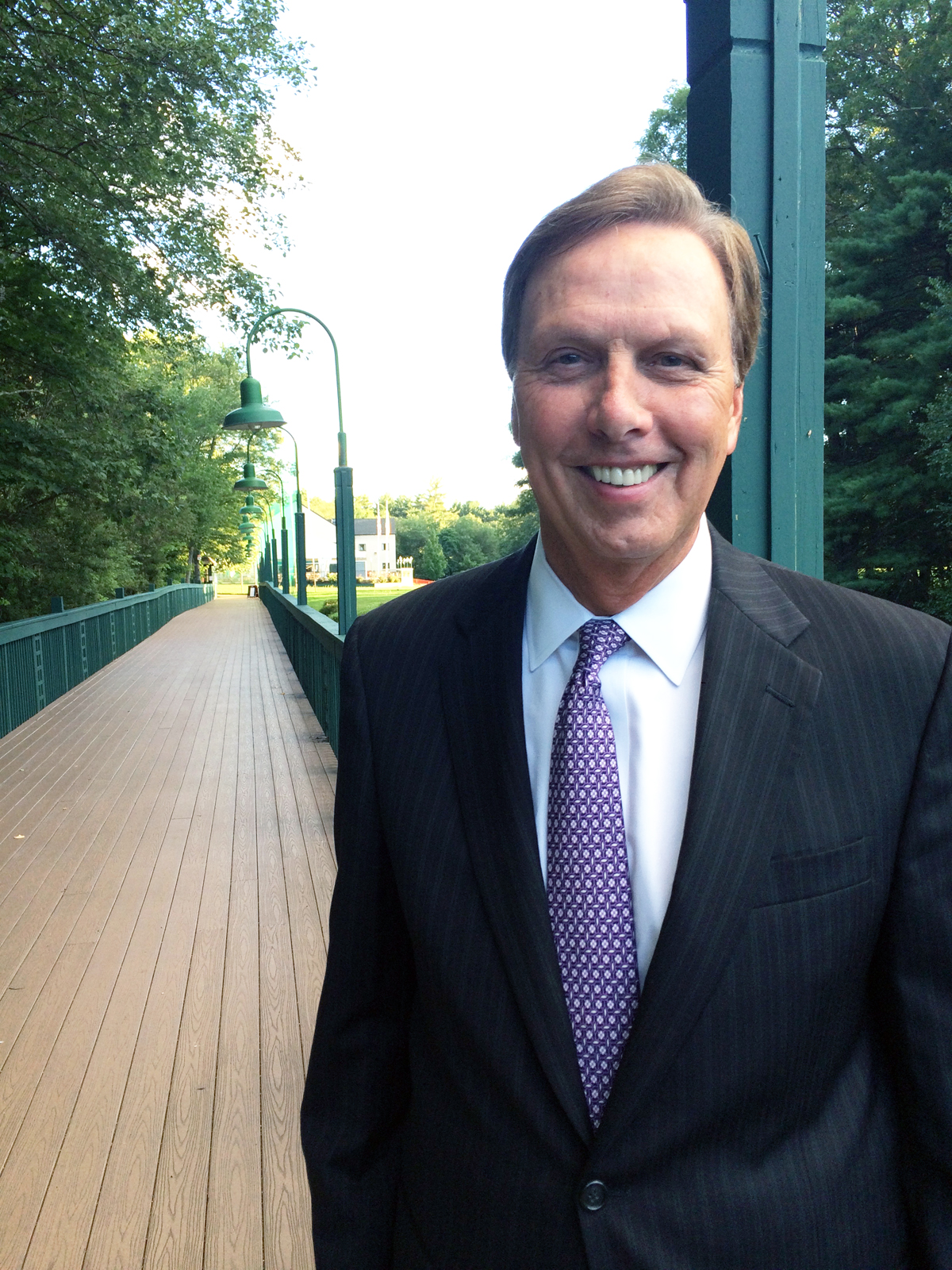 John Lahey built a world-class museum with the help of one of Quinnipiac’s richest alumni, Murray Lender

a story which was made in America: how a Jewish immigrant who built a business empire on frozen bagels helped his Irish neighbours tell the untold story of the great calamity which had shattered their nation and scarred their history.

But it’s also a story about how one resolute Irish American, raised in the Bronx to a teacher mum and bricklayer dad, realized his dream of paying homage to the victims of Ireland’s Great Hunger by creating a museum and institute in their honour.

The Jewish business magnate was Murray Lender, the world’s biggest bagel producer; the Bronx native was Irish American John Lahey. And together they have done more to tell the story of An Gorta Mór than any museum, university or government.

In 1987, when John Lahey was appointed President of the small college of Quinnipiac outside New Haven, Connecticut, Lender was among the school’s richest alumni.

But when the visionary new President met him to outline his plans for developing an outstanding educational institution and requested a gift, the bagel millionaire urged him to be the first person to tell the story of Ireland’s Great Hunger. That spurred the college President to delve deeper into the official silence surrounding the Famine.

“Christine Kinealy’s groundbreaking book This Great Calamity had come out in 1995 and it really sparked my intellectual awakening,” recalls Lahey. “I had always thought the Famine as a sad event linked to the failure of the potato crop but I got angry reading her book which really put the blame firmly with the government in London.”

That awakening was spurred on by the university’s largest donor.

“Murray said to me, ‘John, I will give you a gift but it has to go towards the idea of a Great Hunger museum. I have heard you talk about the impact it had on your people but I’m amazed that I had never heard more about it.’ To my embarrassment now, I actually tried to talk him out of it. But he was insistent and in the summer of 1997 – the 150th anniversary of the Black ’47 – I went to Ireland to start putting together a special art collection which would tell the story of the Great Hunger.”

That same year, Lahey – who now serves as the Chairman of the Board of Directors of the St Patrick’s Day Parade Inc. – was appointed Grand Marshall of the New York St Patrick’s Day Parade. When he stepped out along Fifth Avenue, Murray Lender marched by his side. As Grand Marshall, Lahey travelled to meet Irish American groups affiliated to the parade in the months leading up the 17 March celebration, bringing with him his message about the need to tell the true story of the Great Hunger.

“Around this time, the British Ambassador to the US attacked me for drawing attention to the Famine and said it shouldn’t be compared to the Holocaust, which I hadn’t suggested at any rate. But it does seem to be that it was certainly a cultural genocide,” Lahey said.

“When I first went into the art galleries in Dublin, they were amazed at my request because no-one had sought out these works. Of course, the reality is that very few Irish artists painted Famine scenes. It wasn’t seen as ‘appropriate’ art and there was also a part of the Irish psyche which didn’t want to remember that time of great suffering and agony.”

Lahey contends that, having ignored the centenary of the Great Hunger in 1947, the Irish government only started to acknowledge the horror of that period in the 150th anniversary in 1997. “And in the past 20-30 years, they have come out of the shadows on this issue.

In Irish America, it was different because we could balance off the pain of the Famine with our success as Irish in the US. In Ireland, they didn’t have that.”

In 2000, Quinnipiac opened a room to house An Gorta Mór Special Collection, exhibiting 25 works Lahey had bought from a series of art dealers across Ireland as well as new artworks he commissioned from some of Ireland’s top artists. In a short period, he had brought together the largest collection of Great Hunger art in the world.

However, Murray Lender wasn’t content to rest on his laurels when the Great Hunger room opened at Quinnipiac. “He said to me, ‘John, let’s do more.’ I am sure I was the only person collecting art related to the Famine in the country,” adds Lahey.

The Quinnipiac President commissioned new works from top Irish artists John Behan, Rowan Gillespie (sculptor of the Famine memorial in Dublin’s docklands) and Brian Maguire, who had completed major public artworks on the Great Hunger, and was also gifted a major forgotten piece by the widow of outspoken Irish artist Michael Farrell – one of a handful of Irish artists who had tackled the period.

“By 2010, we had over 100 pieces and Murray was insistent that we needed a museum to house them,” explains Lahey. “We found a 19th century building just off campus which we acquired and gutted to create the museum. I also met Niamh O’Sullivan in Dublin around this time and commissioned her to curate the collection. Niamh (a professor emeritus of visual culture at the National College of Arts and Design in Dublin) then designed the museum to accommodate the collection.”

Músaem an Ghorta Mhóir/The Museum of Ireland’s Great Hunger opened in October 2013. Lender, whose drive had made the landmark institution possible didn’t get to savor the moment: he had passed away in March 2012. But at the opening, President Lahey paid tribute to his vision and generosity: “A lot of Irish and Irish American artists and supporters helped to make this day possible but without the son of a Jewish immigrant from Poland who saw parallels in our experience we wouldn’t be able to dedicate this new facility.”

Since opening, the Museum of Ireland’s Great Hunger has been building its collection and earning a reputation as a centre of scholarship and art. In December 2014, the museum launched a digital database containing around 1,500 articles and illustrations relating to Ireland and the Great Famine. “We mark the second anniversary of the opening this coming October,” says Lahey, “in the knowledge that we have had over 20,000 visitors this year. The story of Ireland’s Great Hunger, the worst demographic catastrophe of the 19th century, is now being told accurately and with visual art which is more powerful and effective in telling this story of pain and suffering than the written word.”

Complementing the Museum is the recently-established Ireland’s Great Hunger Institute under the directorship of Prof Christine Kinealy, which is delivering a full programme of lectures, conferences and presentations on An Gorta Mór. Kinealy, regarded as one of the world’s leading authorities on the Famine, has set out an ambitious strategy for the Institute with more than a few novel initiatives – this December the first graphic novel on ‘The Bad Times/An Droch-Shaol’ will be published in a collaboration between Kinealy and Boston artist John Walsh.

For his part, John Lahey is one of the longest-serving university presidents in the US, having grown Quinnipiac from a sleepy college to a 9,500-student university which boasts new law and medical schools. The university is repeatedly ranked among the best colleges in America and today, among its many subjects, much to its President’s pride, is Irish Studies.

“I hope some day there will be a museum like this in Ireland but until then, there is no better place for this museum than between two great cities, Boston and New York, that the Irish literally built.”

While acknowledging that it’s not always wise for a college president to get involved in projects which have personal resonance, Lahey accepts this was very personal project for him: his great-grandfather was born in the throes of the Famine in 1849 and emigrated to America in 1876. “I’m proud and pleased that not only have I fulfilled the vision that Murray Lender had, but I have also put Quinnipiac on the map with an institution in the form of the Great Hunger Museum which is a world-leader. I’m proud too that Quinnipiac is now ­– and will be long after I’m gone – identified with Ireland through the museum.”