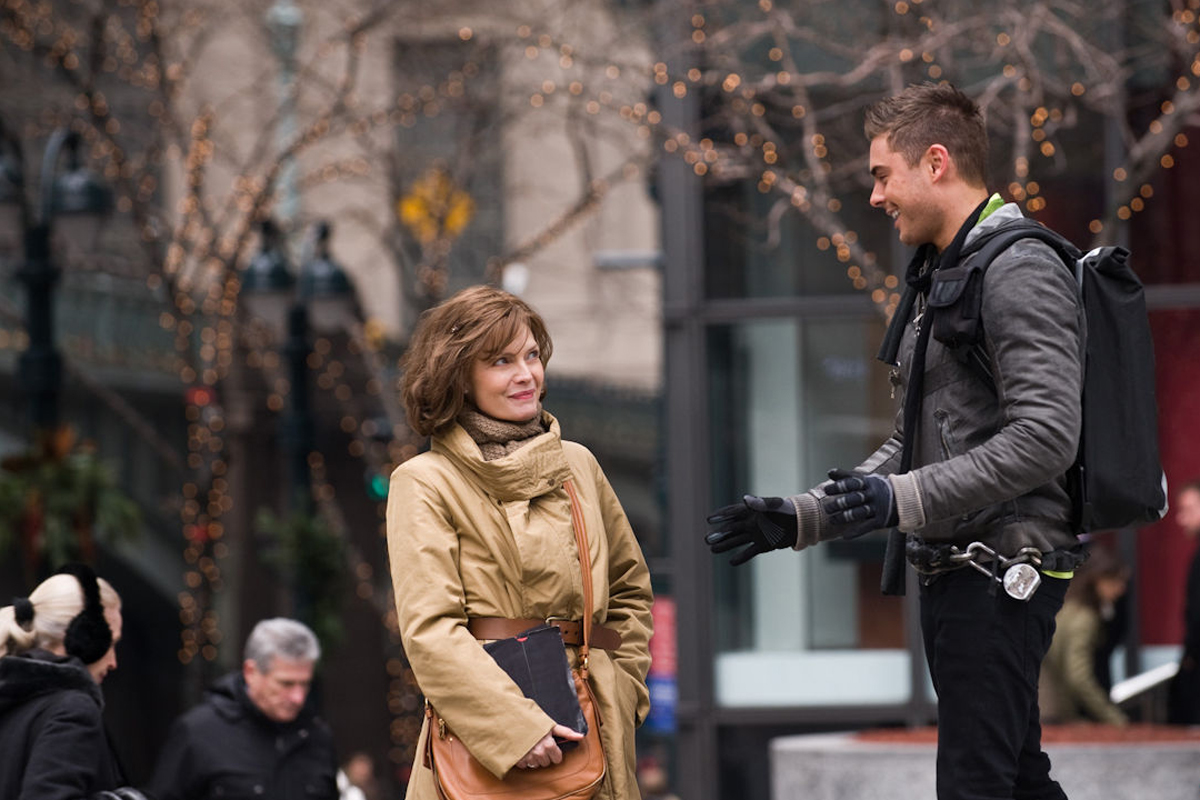 What's the story?As 2011 draws to a close, the lives of multiple New Yorkers collide as 2012 relentlessly approaches.

Lonely, fed-up office worker Ingrid (Michelle Pfeiffer) decides to leave her job and, after making a list of the top ten things she'd like to do before the end of the year, she sets out to achieve her goals with the help of plucky delivery boy Paul (Zac Efron).

Meanwhile, across the city, Tess and Griffin Byrne (Jessica Biel and Seth Meyers) impatiently await the birth of their first child and, should the baby be born on the stroke of midnight, the hospital will award the lucky couple $25,000. However, the Byrnes aren't the only heavily pregnant couple in the city with their eyes on this particular prize.

Over at Time Square, the centre of the city’s New Year’s Eve festivities, Claire Morgan (Hilary Swank) is in charge of seeing that the famous ball is in place for the final countdown into the New Year. However, she and her team run out of luck when the ball gets stuck half way up the pole and her first year in charge looks set to become a disaster.

Do you remember the movie Valentine's Day? You know the one – the sickly sweet, over-sentimental romantic comedy that boasted multiple story arcs played out by a wealth of Hollywood's brightest and best-looking starlets?

You do? Well, you'll also remember that it wasn't very good and, unless you have a particularly sweet tooth and a penchant for sugar-coated rom-coms, then Valentine's Day will not have made a lasting impression on you.

Well, the director responsible for Valentine's Day is back and this time it's New Year's Eve. Yes, the multiple storyline approach is back, again played out by an ensemble cast of Hollywood's most glamorous B and C listers, and it’s a formula director Garry Marshall seems to enjoy.

However, take my word for it, there's little to enjoy here unless you are really, really easy to please.

Although this type of multi-stranded storyline is ambitious, there's so much going on at the same time that there's little room to explain what exactly is going on and why. And so, what we are left with is a dozen bamboozling, incomprehensible and poorly written stories about a group of wafer-thin characters.

The dialogue is woeful and does not do the cast any favours whatsoever. Robert De Niro is reduced to squishing his face up in his usual manner and spluttering his last, playing a dying patient who just wants to see one last New Year's Eve, while Katherine Heigl play-fights with an impossibly wrinkle-free Jon Bon Jovi, the rock star who broke her heart a year ago to the day.

What's next? Mother's Day, Father's Day, Pancake Day? Whatever it is, you can bet it'll be an absolute nightmare for diabetics everywhere.
http://youtu.be/k1Y2uXjsKjs

Unless you are a REALLY big fan of this type of romantic comedy and require nothing more than a star-studded cast kissing, crying and dying, then New Year's Eve will be completely lost on you.