Is the term ‘United Ireland’ really a trigger now? 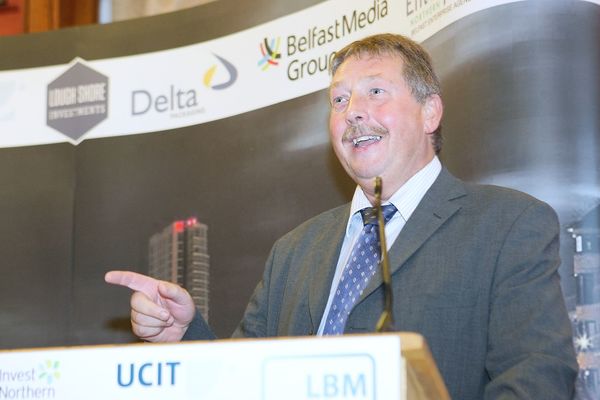 C'MERE A MINUTE: Sammy Wilson insists Northern Ireland is not part of Ireland

An example. Last week we in the north had a visit from the newly-consecrated Taoiseach Micheál Martin. While here, he made it clear he would treat any united Ireland moves as he might the coronavirus: he’d suppress it and ideally stamp it out.

There would not be a border poll in the lifetime of the present government, Micheál made clear. That government is presumed to last five years, although Barry Cowen and others may make that term something less. Anyway, having made sure everyone understood he was no border poll man, Micheál elaborated: “But what I would like to see is significant work under way as to what a shared island would look like... I grew up in a tradition that wanted a united Ireland. The Good Friday Agreement was a fantastic breakthrough – yes, it does have a provision for a border poll but also for the principle of consent.”

See what I mean about going a bit mad? Micheál wants to see “significant work” so we can all know what a shared Ireland “would look like”.

Yerra Micheál, Ireland has been “shared” for at least the past one hundred years. One share consists of the  independent state part of which you are Taoiseach and a northern part that is under the jurisdiction of Britain. As to your guff about the GFA making “provision for a border poll but also for the principle of consent” – are you hearing voices in your head, boy? The border poll is all about  the principle of consent. It will be held to see what the people of the north of Ireland and the south of Ireland feel about partition. Do they give their consent to a united Ireland or to a partitioned Ireland? Saying there’s provision for the principle of consent as well as a border poll is like saying you have a bottle of whiskey hidden behind the couch and you also have a bottle of whiskey hidden behind the couch as well.

Back in pre-Covid days – last February, in fact – people in the south were polled about a border poll. In that poll 57% of people said there should be a border poll within five years. In other words, the Taoiseach is out of touch with the wishes of most people in the state he leads.

When they told that good knight Sir Jeffrey Donaldson (DUP) about the 57% in the south, he responded: “Well, I’m surprised the figure is as low as this in the Irish Republic, and I think that indicates that there is little consensus on the need for a border poll.”

Once again the UI words start a scrambling of the brains. Most people would have said 57% was a very clear majority. The UK with the willing assistance of Jeffrey and his party are leaving the EU on the back of 52%. As for “little consensus on the need for a border poll” – have you checked on the meaning of the word ‘consensus’ lately, Jeffey? It means general agreement. So 57% of people want a border poll, but there’s no general agreement? Jeffrey, maybe it’s time you had a wee rest.

And maybe take your party colleague and Brexit spokesman Sammy Wilson with you. Here’s Sammy’s response to that 57%: “It’s really none of their business. Northern Ireland is part of the UK, not part of Ireland, so the views of the Irish on a referendum in respect of another country are totally irrelevant.”

Sammy,  would you c’mere a minute? Northern Ireland isn’t part of Ireland? Aside from checking a map, how do you account for the fact that the GFA makes it clear that anyone in the north who wishes to can declare themselves as Irish? Something that just about 50% of the population in the north do. As for the irrelevance of the south’s views on a border referendum – you have read the GFA, Sammy? Including the bit where it says a border poll would be held on both sides of the border?  If that doesn’t make the south’s views relevant, my granny played centre-forward for Glasgow Rangers.

For a sane comment about a united Ireland we could do worse than go back nearly one hundred years. Here’s Hanna Sheehy-Skeffington, speaking clearly and rationally: “I recognise no partition. I recognise it as no crime to be in my own country. I would be ashamed of my own name and my murdered husband’s name if I did.”

Some, no matter what horrors are visited on them, retain their sanity.
Others, no matter how nice people are to them, can’t seem to get within an ass’s roar of reason.