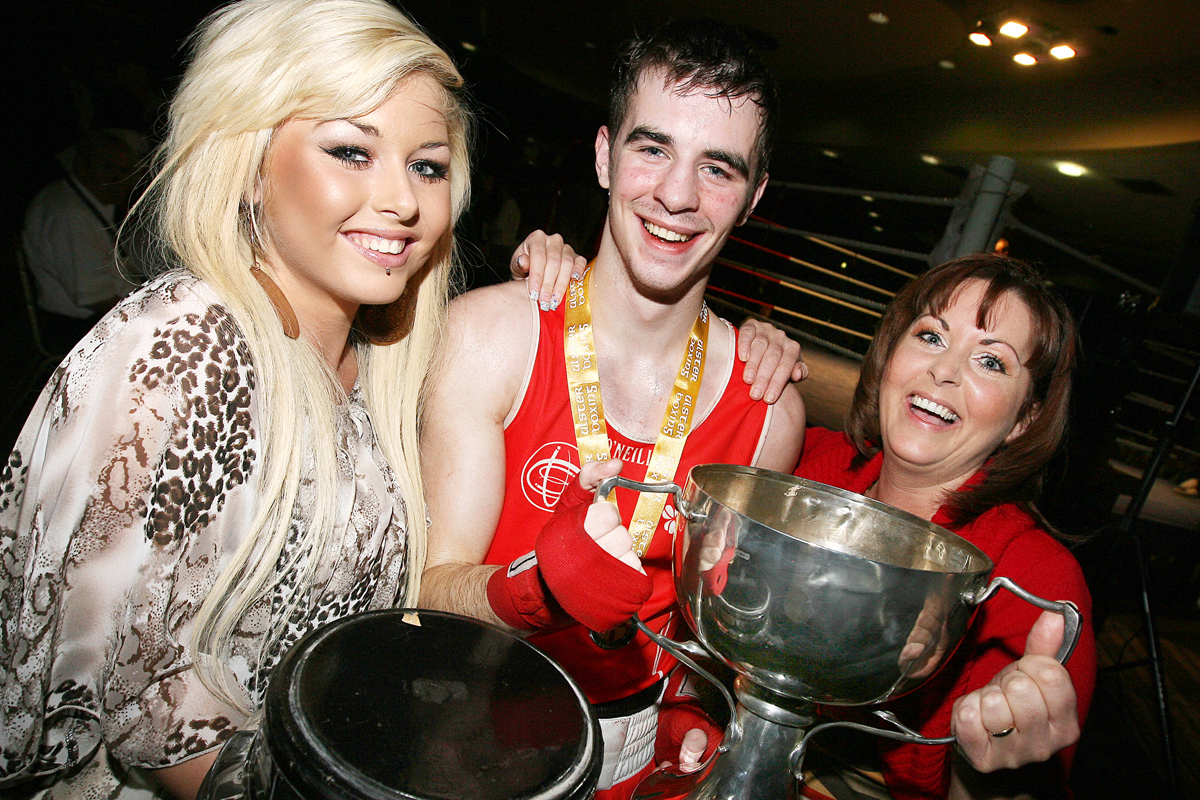 WHAT the 2012 Ulster Elite boxing finals may have lacked in quantity, they certainly made up for in quality as the large attendance at The Emerald Roadhouse were treated to some fantastic action on Thursday night.

The eight scheduled final’s became six on the night as St Oliver Plunkett’s Tommy McCarthy at heavyweight and Cavan’s Micheala Jannick at featherweight were given walkover’s while St Paul’s Brendan Irvine and Stephen McKenna served up a quality support bout which Irvine won 13-6.

The big winner on the night was Immaculata who provided three champions out of a possible four while ‘Mac pair James Fryers and Joe Fitzpatrick were named best boxer and most improved boxer respectively. This was the famous Lower Falls club’s best-ever performance with a total of six Ulster champions.

JOE Fitzpatrick produced a display the belied his 17 years as he overcame the experienced Ruairi Dalton to claim the Ryan Cup.

The European Youth bronze medallist showed just why he is touted for big things as he settled well and took the first round 6-4 thanks to some nice counter punching and a sweet left hand.

The Mac boxer grew in confidence in the second and continued to pick off the Holy Trinity man who was left frustrated as he was docked points for holding and found himself 13-7 behind heading into the final round. Fitzpatrick continued to be the aggressor and seemed to shake Dalton with a heavy bombardment in the third as his strength ensured he finished stronger and was comfortably 19-8 to win his first Ulster Elite title.

“I think for me not struggling to make the weight whereas he maybe did helped because he was a bit weaker in there,” said Fitzpatrick.

“I won the bronze at the European Youths so it has been a good year for me and hopefully I can keep that going next year.”

DEFENDING champion James Fryers held on to his title despite a late surge from the battling James Tennyson.

Fryers settled into the action better and landed some sharp shots that bloodied the nose of the St Paul’s man as he moved into a 6-4 lead.

The champion grew stronger in the second and continued to produce some measured boxing as he picked Tennyson off and was getting the better of the exchanges as he led 14-10 moving into the final frame.

While it seemed as though Fryers was well in control, Tennyson showed he was not ready to go down without a fight as the final three minutes turned into a war with the St Paul’s man marching forward and putting every last ounce of energy into his title push.

It seemed as though Fryers was tiring but the champion showed sufficient experience to hold onto his lead and retain the Sholdis Cup.

It was double joy for the Fryers family as the following day James’ mother Josephine was due to graduate from Queens University and the champion said he was delighted to have kick-started the celebrations with the win.

“When a guy doesn’t stop throwing punches you need to outwork him and I had to try and show my experience to try and get past it,” he said.

“I was told to stick to the gameplan and thankfully it worked.

“He was like a bull that saw red in there so I had to get on my bike but he was so quick and so fit I couldn’t keep away from him.

“I’m delighted because my mum qualifies from Queen’s tomorrow so I’m delighted to win it for her as she wasn’t here last year.”

SARAH Close held onto her welterweight title in the only women’s contest on the night.

Close was much the bigger rangier boxer and so it proved, as she was able to pick her opponent off and dominate al three rounds.

The Holy Family girl was always in control and some tidy boxing ensured she held onto her crown.

IN what was the closest contest on the night, Jamie Kennedy ensured the U’Prichard Cup would be spending the year in Toome as he edged past Eamon Magee in a thrilling light welterweight final.

Kennedy was the bigger of the two and took the centre of the ring but this didn’t deter Magee who was able to pick his opponent off although Kennedy edged the first 8-7.

The second was again close as both boxers were forced to take punches to get their own off and it was Magee who finished stronger to ensure the final round began with the pair tied 13-13.

Both men gave their all in the third as the contest became a real war with both landing scoring hooks. Magee seemed to be on course for victory but Kennedy produced a late surge that saw him pip the Immaculata boxer with one point to spare.

The Holy Family man was in control from the off and some fine body shots were able to land as he dictated the pace of the opener and led 5-3.

Having gained the upper hand, Upton went into overdrive in the second and was able to produce an exhibition of feints before offloading with straight right hands as he moved 14-5 ahead.

Garland tried valiantly in the third but was unable to make any headway as Upton dazzled the crowd with his skills and ran out a convincing 21-6 victor.

“I’m delighted as this was a big win to win the Ulster Seniors,” said the McGeough Cup winner.

“I’m happy now as I can get Christmas out of the way and get ready for the Irish Seniors.

“I took the first round to see what he was like but stepped it up in the second and third.

“I caught him with the cleaner shots so I’m happy as I have a two month old baby and have two titles as well.”

JP DELANEY made it a trio of wins for Immaculata as he got the better of his Derry opponent in the last fight of the night. This bout took until the third to get going as the referee had to call both boxers to the centre and ask for some action but it was Delaney who took a 4-2 lead.

The second followed a similar pattern as neither man really opened up but Delaney did more to move 6-3 ahead before an exciting final round.

Both men decided it was time to go for it and began throwing leather as it seemed as though the pair had been saving their energy for a big finish.

Delaney’s three point lead proved to be invaluable as Coyle stormed forward and was finishing the stronger but Delaney was just able to hold on to claim the McAlindan Cup.

“It was tough enough in the final round. I suppose I spent the first two just seeing what he was like,” Delaney said.

“I thought I would have won it by more but that’s how the judges saw it but I’m happy to have won.”