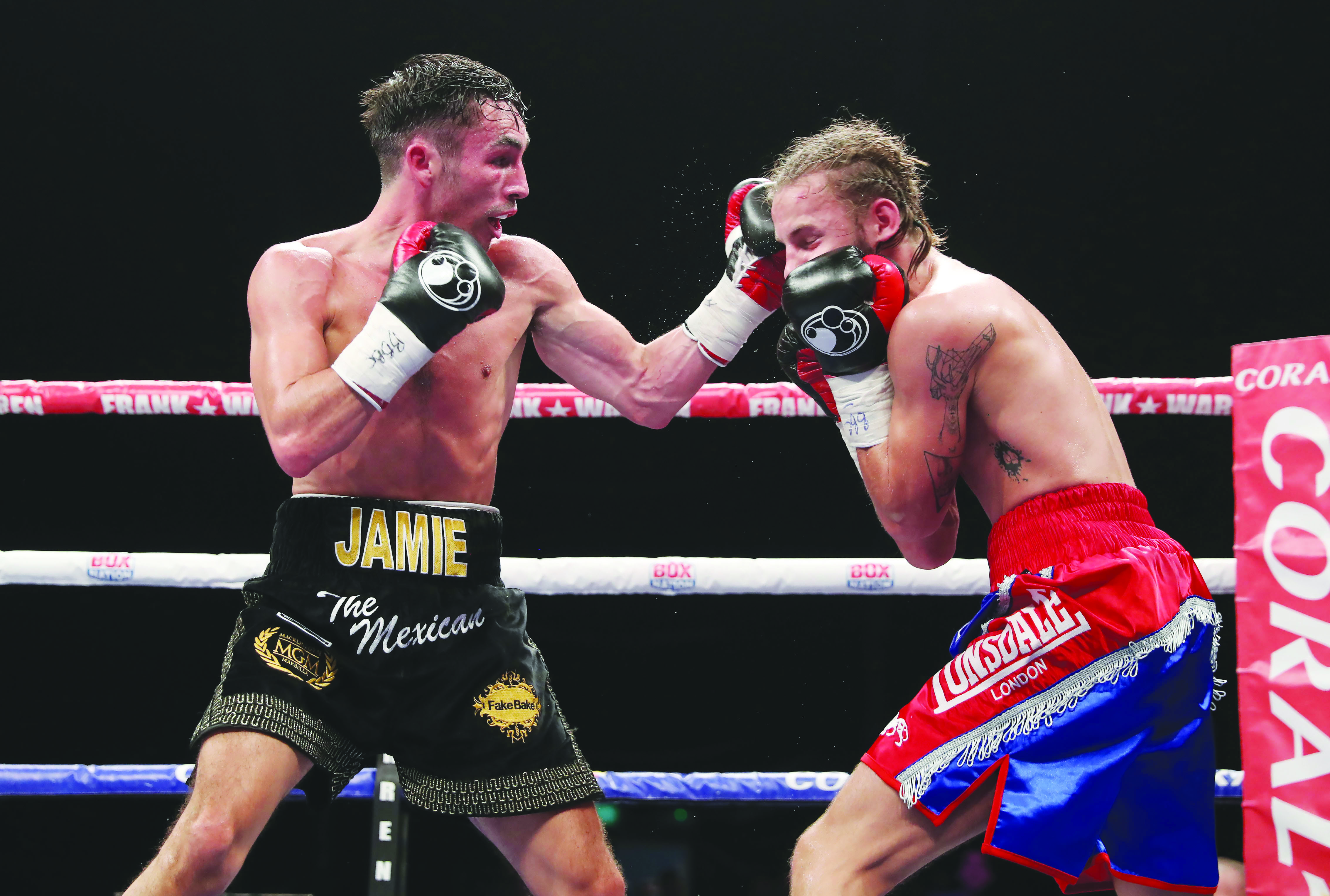 Jamie Conlan is anticipating a much tougher test from former world title challenger, Yarder Cardoza at the Waterfront Hall on Friday than his routine points win against David Koos in his last outing on home soil

IT could be a massive eight days for the Conlan clan on either side of the Atlantic and this Friday night at the Waterfront Hall, Jamie will hope to get things off to the perfect start when he takes on former world title challenger, Yader Cardoza (22-10-1) for the vacant WBC International Silver super-flyweight title.

With younger brother, Michael set to begin his journey towards world titles at Madison Square Garden next Friday – St Patrick’s Day – Jamie is hoping victory against the 28 year-old Nicaraguan can help him land that title shot he has been closing in on for some time.

This fight was of course due to take place three weeks ago, but a chest infection forced Conlan to postpone and he feels this has been a blessing in disguise going into the toughest test of his career to date.

“It actually worked out for the better if I’m honest,” said the 30 year-old West Belfast man.

“We got to sharpen up on everything and I’ve never felt as good going into a fight. I didn’t have to worry about weight the whole time, I feel a lot stronger. I’ve brought the weight down nice and have been able to work on the tactics of the fight in sparring.”

His training camp saw him based mainly in Glasgow with trainer, Danny Vaughan, but he also spent some time training in LA alongside brother, Michael at the Rock Gym and he said that experience ought to shine through in a career-best performance this weekend.

“That’s the reason we didn’t want to lose the fight and just pushed it back three weeks,” he said of his time in the United States.

“We knew I would get over the chest infection in a matter of days, so we didn’t want to lose the experience of LA. I wanted to improve and work on what we learned in LA to bring it into the fight. It’s been a long camp, but a worthwhile one.”

Cardoza will travel to Belfast as an underdog, but as live an underdog as they come.

While his record may appear modest, his defeats all came against top-class opposition including Adrian Hernandez who he lost out to for the Mexican’s WBC light-flyweight title in 2013.

The Nicaraguan has boxed just twice outside of his home country – both in Mexico – so it will be a new experience for him in Belfast, but Conlan doesn’t expect his opponent to be in any way overawed and is anticipating the type of test he faced in his epic battles against Junior Granados and Anthony Nelson.

“I think the opponent makes for a really exciting fight,” predicts the 18-0 Conlan who has won 11 of his fights inside the distance and believes he will make that a dozen on Friday.

“He is a former world title challenger. He doesn’t care about me, so he is coming here to upset the applecart.

“If you see any of his fights on You Tube, he is relentless. He doesn’t stop punching, he’s in your face from start to finish. He has a great engine. His record doesn’t suggest he is a massive puncher, but if you watch him punch, he looks wicked enough so I’m in for a testing night.

“LA will stand by me, so I have tested myself to deal with anything he is going to bring. It will be a great fight, but one that I’m ready for.

“What I learned from LA was how to control the pace more and to fight at my own pace. It would be good to implement that game plan and see how it will go in the fight. In my head, I don’t see it going the distance if I’m honest.”

Last time out, ‘The Mexican’ scored a routine points win over David Koos as he topped the bill at the Titanic Exhibition Centre on November 5, but admits he would have preferred a greater test. Now headlining in his home city for the second fight in succession, he believes this fight will be a worthy main attraction and is intending to deliver a performance befitting of such.

“I want to give exciting nights back to Belfast and to show the people who pay their hard-earned money something to watch,” he stressed.

“This one will be a lot better and I’m much more excited about it because I know we’re guaranteed fireworks. It’s hard for people to pay that money to come out and watch you, but you have to give them what they are paying for.”

Victory will leave Conlan in a strong position with most of the main governing bodies in terms of world rankings. Already, he is number two with the WBO while he is also ranked highly by the IBF and by claiming the belt on Friday, will surely enter the WBC’s top 15 making him eligible for a title challenge.

There is also the potential for a meeting with the WBA champion, Sheffield’s Kal Yafai that would be a massive showdown domestically.

Whatever the path may be, Conlan is unconcerned and intends to just do what he does best in order to avoid any slip-ups and remain on course for a title shot.

“They (team) keep dangling that carrot on the end of the line saying it’s going to be the next one, but I don’t think about it,” he insists.

“I just think of the guy in front of me and I just try to control the controllables. Let the manager manage, the promoter promote and the fighter fight. If everyone does their job, then we are all going to come out smiling.

“But I know, no slip-ups. I have to look at every fight now as a world title fight because if I slip here, no-one cares and no-one will want to fight me.

“At the minute I’m number two with the WBO, number six or seven with the IBF and then hopefully a good ranking with the WBC after this so I bring something to the table. This gives the opportunity to move and put myself in place for the world title.

“I know what the lads have got going behind the scenes and what game they are playing. I’ll just let them do what they’re doing and I will just get on with my own thing, win and move on.”