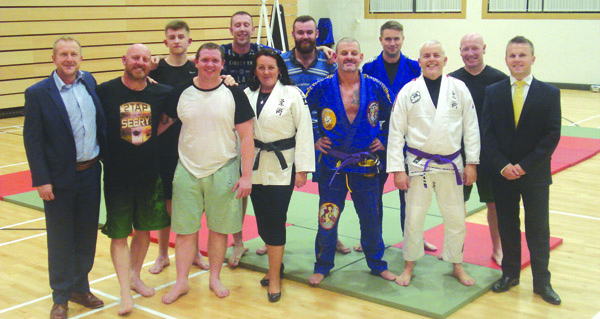 Peter Lavery, Robert Cullinan, John McTasney and Ciarán Martin who all hail from the north of the city have a lifetime of coaching experience between them and Robert said they wanted to give something back.

“We have been working with local MLAs Nichola Mallon and Paula Bradley for the last five months to gather support for the free coaching classes in Brazilian Jiu-Jitsu,” said Robert.

“The classes are open to all members of the local community but especially those vulnerable members within our community who are troubled by depression, anxiety, suicidal thoughts or the bereavement of loved ones.”

Robert said having spent so many years in the gym as a coach he was aware of the benefits of exercise and wanted to pass that knowledge on to people who may not realise how much of a positive affect it could have on their lives.

Official guidelines from government encourage the promotion of exercise over the prescribing of anti-depressants in some cases.

“The training releases feel-good natural chemicals in the brain which elevates mood and breeds happiness,” said Robert. “Not only does consistent martial art practice boost your energy levels and psychological well-being but longer term, it is hoped that as enthusiasm for the activity grows participants will naturally migrate to become regular members of their local clubs.

“Having that regular practice helps to relieve tension and frustration and improves emotional health. We are passionate about helping local neighbourhoods to tackle the scourge of poor mental health and the devastating consequences it can have on all our community.”

Brazilian Jiu-Jitsu is a martial art that focuses on grappling and ‘ground fighting’ and is similar to Olympic wrestling. It is physically demanding and is a key part of mixed martial arts with a number of UFC champions specialising in the technique.

Robert is part of the Merville Brazilian Jiu-Jitsu club but says they are offering the extra classes in Girdwood as it is perfect venue for teaching the martial art, according to the coach. The studio where the classes will be taught has been designed specifically for exercise classes and all equipment will be provided.

“We have based ourselves at Girdwood as a means of encouraging participation from all communities within North Belfast.”

Anyone interested in availing of the free lessons can come along to the Girdwood Hub on Tuesdays from 7pm to 8pm or 8pm to 9pm.

The classes are held in the upstairs studio and are open to anyone between the ages of 12 and 55 although children under the age of 18 will need consent forms to be signed by their parents.

The cost of renting the facilities is being covered by Belfast City Council’s Sports Development Department.