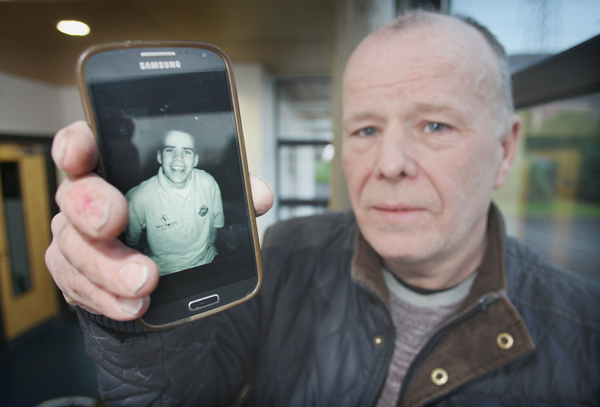 Joby’s father, Joe Murphy, will join others at the Lagan Weir to remember his son five years on from his tragic death after a Snow Patrol gig

LIFE-SAVING Community Rescue Service volunteers and the family of tragic Joby Murphy will unite this weekend to mark the fifth anniversary of his death.

A special commemoration will be held at the Lagan Weir, which will also mark the 500th patrol by the volunteers. 20-year-old Joby, from Glengormley, went missing after a Snow Patrol gig at the Odyssey Arena in January 2012.

The Murphy family have maintained close links with the Belfast Community Rescue Service patrols which was set up shortly after Joby’s death. He was found 31 days after he went into the water with the aid of sonar equipment borrowed from Cork.

The Joby Murphy Appeal Fund helped purchase £41,000 worth of sonar equipment for the service – with the help of a donation from Irish band Snow Patrol. Joby’s father, Joe Murphy, praised the service for their work in re-uniting families with their loved ones.

“I can’t praise the Belfast rescue service enough. The difference the service has made has been unbelievable. They save lives. It takes something to happen to get things up and running.

“The sonar equipment helped recover nine bodies last year alone. It saves so much time and agony for people.

“It is comforting to know that the generosity of people donating money has helped buy the equipment for the team. It gives you some comfort in your grief.”

Paul Stitt from the Community Rescue Service said the poignant commemoration will mark both Joby’s anniversary and a service landmark.

“This weekend marks the 500th patrol of our Belfast Community Rescue Service as well as marking the fifth anniversary of Joby’s death, which occurred on Thursday (today),” he said.

“These patrols happen every Friday and Saturday from 23:00 to 04:00. To date the volunteers have prevented countless persons from entering the River Lagan and any that have entered while we have been on patrol have all be successfully recovered alive.

“There wouldn’t be a week that goes by without an incident.

“The sonar equipment purchased by the Joby Murphy Fund has successfully been used on the River Lagan all over the province, down south and in England.

“Thanks to their hard work raising the money, families don't have to wait so long to be reunited with their loved ones.”

Family and friends of Joby Murphy will gather at 9pm on Saturday night for the event which will be marked by music and song before celebrating the landmark patrol which will set off as it always does at 11pm to keep the people of Belfast safe.