The unmistakable sound of the bull in an SDLP shop 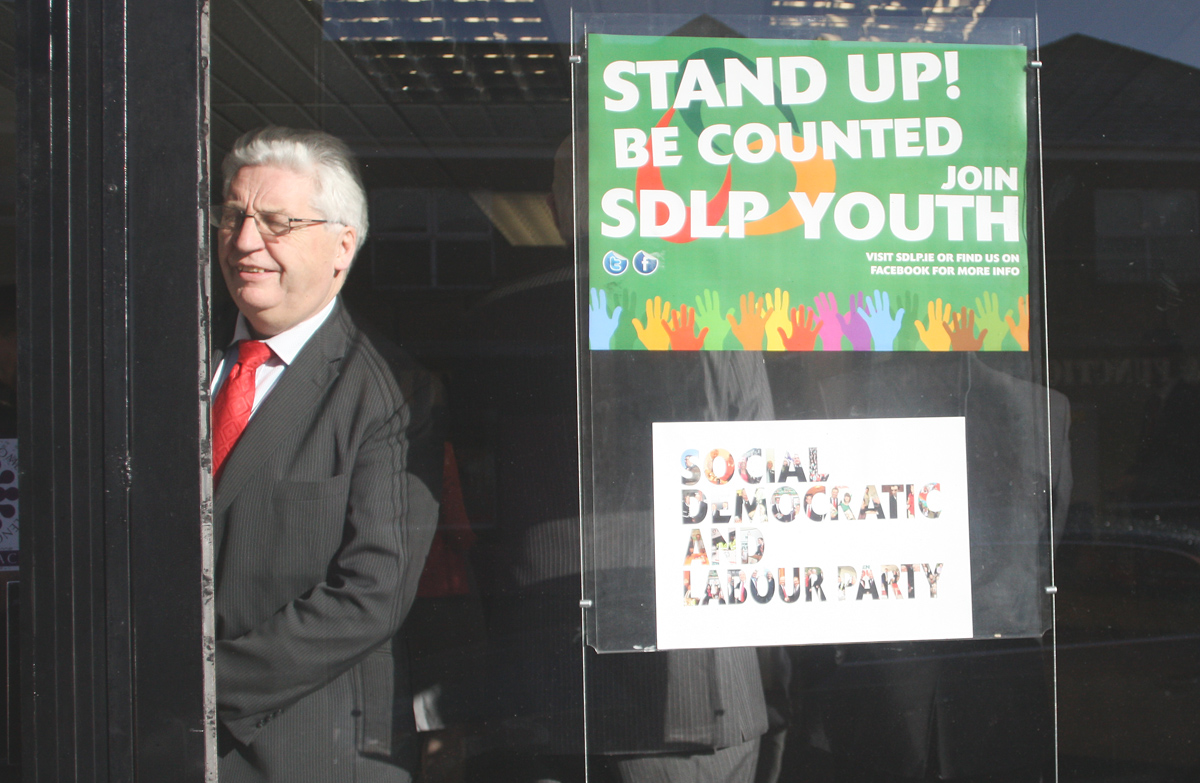 Alasdair McDonnell at the opening of the Glengormley constituency office, where he made the remarks

If it’s not a famine it’s a feast. For weeks you wait for something to happen in politics and then half-a-dozen of them come barrelling down the road.

Exhibit 1: the SDLP. Like the Ulster Unionist Party, the SDLP’s main problem is to make itself visible. Mike Nesbitt had a go at solving that by storming out of Stormont because the IRA killed Kevin McGuigan. He didn’t have any evidence that this happened or that the IRA existed, but he did have the word of the Chief Constable.

The SDLP made itself visible last week by letting leader Alasdair McDonnell into its new china-sh... sorry, I mean office, in Glengormley. Alasdair, not the most observant of leaders, either didn’t note or forgot he’d noted the presence of Evan Short, a North Belfast News journalist. Next you know Alasdair is doing a rant on how the DUP doesn’t want a Taig about the place and how Sinn Féin just can’t tell the truth. A volcano of protest erupted in response.

Now you might wonder why, Virginia. Because Martin McGuinness has said something along those lines more than once and there has been little reaction. And Alasdair’s bit about Sinn Féin not telling the truth – it wasn’t exactly an original charge, Enda Kenny and his faithful companion Joan Burton use it every time Gerry Adams asks them a question in the Dáil.

But one way and another the opening of the Glengormley branch was classic Dr McD stuff and gave Dr Eamon Phoenix the chance to come on BBC Raidió Uladh/Radio Ulster and explain, in his inimitable breathless way, the origins of the word ‘Taig’. I don’t know why I started laughing when that happened. Dr Phoenix knows his stuff and can talk about it like few others. But to think that the Montague Cinema in Dromore, a place I visited often in my youth, was really Taig Cinema! You truly learn something every day.

Exhibit 2: Jeremy Corbyn. In some ways, Jeremy looks like the gift that keeps on giving. Most recently he’s been under heavy fire for having attended meetings with Sinn Féin back in the 1990s, before the Good Friday Agreement was signed. Andrew Marr on his Sunday morning programme suggested that Corbyn’s declared support for a united Ireland would threaten the British position as a neutral arbiter. Eh? You’re kidding, Andrew. The first thing Tony Blair said after being made British Prime Minister and visiting here was that he was a unionist. And I don’t suppose any of us thought for a moment that Ed Milliband, or Gordon Brown, or the Windbag Kinnock was anything other than a unionist. But it now appears that being unionist equals being neutral, while being pro-united Ireland equals imbalance. Not that any of the charges bothered Corbyn. He handled Marr and his questions with consummate ease.

Exhibit 3: David Cameron and that pig. No, Virginia, I am not referring to Lord Ashcroft, the man who included the porcine episode in his revenge book Call Me Dave. Like the Chief Constable, Lord Ashcroft offered no supporting evidence for his startling claim about Cameron’s student capers, and again like the Chief Constable, he didn’t appear to feel any need to. To be honest, my heart is with the unfortunate deceased, decapitated pig. Even dead, decapitated animals deserve better than interference by David Cameron. But Ashcroft is himself such an unpalatable creature, he has given me what I never thought I’d feel: a smidgen of sympathy for the Tory prime minister.