GERRY ADAMS: Legacy Bill is a travesty of legal standards 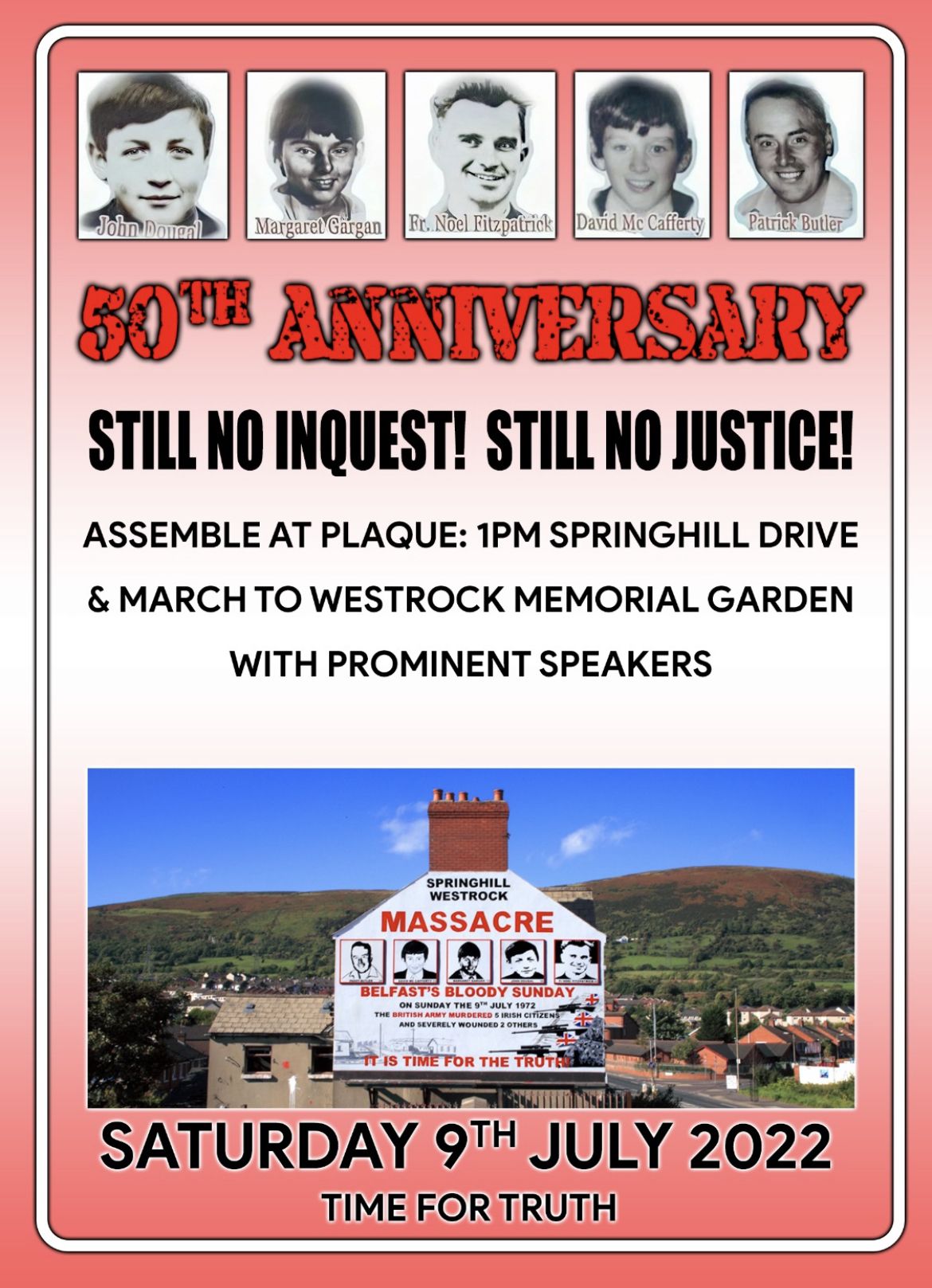 THIS Saturday will mark 50 years from the horrific events of the summer evening of July 9, 1972, when British soldiers shot and killed two adults and three children in the Springhill/Westrock area.

Those killed included 38-year-Old Paddy Butler, who died after he was hit by the bullet that killed Father Noel Fitzpatrick,who was trying to help the wounded and dying. Martin Dudley (19) was shot in the back of the head by a second British Army sniper and seriously wounded as he got out of a car. 17-year-old John Dougal was shot dead and his friend Brian Pettigrew was seriously injured as they tried to assist Martin Dudley. 13-year-old Margaret Gargan was shot dead by another British Army sniper. And 15-year-old David McCaffrey was shot dead as he tried to pull Fr Fitzpatrick and Paddy Butler out of the line of fire.

As in the case of the Ballymurphy Massacre case and that of Bloody Sunday just six months earlier, the British lied about the circumstances surrounding the Springhill/Westrock Massacre. They sought to present the victims as ‘gunmen’ and ‘gunwomen’ justifiably and legitimately killed as they attacked British troops.  This lie and its perpetuation in the decades that followed caused huge distress to the families and to their neighbours, friends and community.

These British Army operations, and the long list of disputed killings, cover-ups and state collusion carried out by the RUC and British forces, are of a pattern to be found in countless British military actions in former British colonies. Whether in India or Kenya, Palestine or Ireland in the early part of the 20th century, those who protested for and demanded their freedom were met by violence.

The inquiry into Bloody Sunday and the inquest into the Ballymurphy Massacre revealed the truth. Last week the inquest into the killing fifty years ago of mother-of-six Kathleen Thompson from Derry concluded that she was an innocent victim. On the same day the Belfast High Court ordered the scrapping in its entirety of the review by the Historical Enquiries Team’s (HET) into the bombing of McGurk’s Bar in December 1971. 15 people were killed by the UVF. Brigid Irvine, whose mother Kathleen was one of the victims, had challenged the conclusion of the HET that there was no evidence bias by the RUC in its investigation. Justice Humphrey described the HET conclusion as “irrational”. These are just a few of the many examples of killings carried out directly by or in collusion between British state forces and loyalist death squads.

In an effort to prevent further damaging revelations the British Government has introduced a Legacy and Reconciliation Bill. This Bill has now passed its second reading in the British Parliament. Its aim is to close down the rights of victims by banning all investigations, inquests, and future civil actions.

Relatives for Justice said: “The so-called Independent Commission for Reconciliation and Information Recovery will hold secret reviews and then determine what will be disclosed. It will not involve, in any way, the next-of-kin of those murdered. It is completely absent of legal norms and standards. It is, clearly, not independent, despite the title. It will hollow out the fundamental rights and freedoms enshrined in the Good Friday Agreement and thus seriously undermines and threatens the Agreement.”

All of this is a breach of previous agreements reached on legacy. It does not have the support of any of the North’s political parties or of the Irish Government and the Biden administration.

This Saturday the Springhill/Westrock families will assembly in Springhill Drive at 1pm and walk to the Westrock Memorial Garden to highlight their case and demand justice. Join them if you can.

Do your job, Leo, and never mind the excuses

SOME of our political leaders in Dublin repeatedly reduce their offices to the status of an observer. This affects many matters which fall within their responsibility. Quite often we are treated to commentary from a government Minister on public services, or the lack of them, homelessness or the cost of living crisis. It is as if they had no responsibility or obligations for dealing with the issues involved.

It is easy, therefore, to see why many voters don’t take these representatives seriously. Why should they when those involved, particularly some government ministers, don’t take themselves seriously when it comes to developing and delivering the policies needed by working people and families? This says a lot about our government’s lack of ambition and their absence of strategic vision. Those involved seem more concerned to serve out their time and to keep their ministerial positions when they should be using these positions to bring about the change which is needed to shape a fairer society.

This is especially the case during these times of great challenges and greater opportunity arising from British Government policy towards Ireland. The latest offering from An Tánaiste Leo Varadkar is a good example of this. He says “a border poll – at this stage – would be both divisive and defeated.”

So what is he doing about this? Zilch! You would never think to listen to An Tánaiste or An Taoiseach that their government is co-guarantor of the Good Friday Agreement. Or that the referendum on unity is a matter for him. It is little wonder that Mr Johnson treats Ireland the way he does. If the Irish Government does not stand up for its international treaty with the British Government why on earth would a serial breaker of agreements like Mr Johnson do so?

Leo Varadkar and the Irish Government need to lead the debate for the new Ireland. They need to establish an all-island Citizens’ Assembly to plan the future.

We need to utilise and intensify our diplomatic services and place the constitutional future of this island at the centre of Ireland’s International mission.

The government also needs to work properly with the people of the North.

If we had paid heed in the past to the excuses from Dublin for doing nothing the progress of the last fifty years would not have happened.

More progress is needed. Not less. So enough of the excuses, Leo. And Micheál. Do your job. Or move aside for those who will do it better than you.

That summer Féile buzz is beginning to be felt

EVERY year I look forward to August. Since 1988 I have been amazed, entertained, uplifted and excited by the content and the growth of Féile an Phobail. For 34 years the many people who have helped plan and organise the thousands of events that have been held have worked tirelessly to put on the best possible Peoples’ Festival. Well done Kevin Gamble and the Féile team.

This year Féile an Phobail has surpassed itself. Over 300 events. Great acts like Paul Brady, Imelda May and Damian Dempsey, the Wolfe Tones and traditional acts in venues across the west of the city. World class arts and cultural events along with great debates and discussions are all part of the ten-day programme beginning on August 4 and running to August 14. These will include the Moore Street Preservation Trust, which will be holding a talk in Áras Uí Chonghaile on Monday, August 8, on the fight to save the Moore Street battle site. And on Friday morning, August 12, during prisoners’ day in the Felons Club, Richard McAuley and I will be launching our new book on the Armagh Women. It tells the story of women republican POWs held in Armagh Prison. We hope to see you there.