On the ready for the Basketball Hall of Fame Belfast Classic 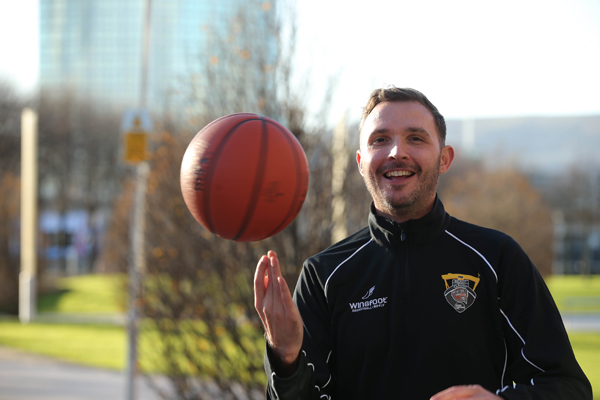 Marc Mulholland is the driving force behind the Basketball Hall of Fame, Belfast Classic which takes place next weekend (Friday 1 December and Saturday 2nd December) at the SSE Arena

A HOST of leading American college basketball teams will descend on Belfast for the two-day Basketball Hall of Fame Classic which takes places at the SSE Arena next weekend.
The Sport Changes Life Foundation is hosting the event in conjunction with the Naismith Memorial Basketball Hall of Fame and the Metro Athletic Conference (MAAC) with thousands expected to attend the showcase which will feature Manhattan College, Holy Cross College, La Salle University and Towson University.
Additionally, two games per day from the Basketball Hall of Fame Belfast Classic will be broadcast live to millions of viewers in America by the CBS Sport Network.
Tournament Exective Director Marc Mulholland, who is also works for the Sport Changes Life Foundation, is thrilled that the event is being staged in Belfast and is anticipating a bumper crowd over the two days.
Marc has teamed up with another West Belfast basketball legend Gareth Maguire who is the CEO and the founder of Sport Changes Life to bring this amazing basketball tournament to Belfast as the excitement continues to build for next weekend.
“This is the first of its kind in terms of a basketball event in Europe,” said Marc.
“The only other places where it has been held, other than America, is Mexico, Puerto Rico and Shanghai.
“It took a lot of years of hard work to negotiate to get this event in Belfast. It is a massive honour to be able to welcome College Basketball, one of the purest forms of basketball, to Belfast.
“We can now say Belfast is a destination for large, international sporting events.
“We have a number of players who are in the top 50 at the minute who play for La Salle University and they are coming across. A number of these players would potentially be scouted for the NBA draft.
“Anyone coming to watch this event will see the talent of today, but the future stars of basketball.”
One ‘Star’ who is helping to promote the event is Kerry GAA legend Kieran Donaghy, who attributes a lot of his success to the fact that he played basketball for Tralee Tigers and later Tralee Warriors.
Donaghy features in a promotional video for the Basketball Hall of Fame Belfast Classic’s Facebook page and will be in attendance himself which Marc says is a huge boost for the event.
“Kieran (Donaghy) and I go way back. We played on the Irish international basketball teams together when we were younger,” said Mulholland.
“Kieran is a huge star within Kerry football, but he is also a huge star within the Irish basketball community.
“He has done a lot of great work for Sport Changes Life with myself and Gareth Maguire and he is a great ambassador for Sport Changes Life.
“He embodies somebody who comes from a tough background and has used sport to change their life for the better and he is a great role model for young people in the basketball community and in the GAA community.”
Mulholland hopes the two-day festival of basketball will inspire youngsters from across the city to change their lives.
One of the key aspects of the Sport Changes Life Foundation is working with local communities to kerb anti-social behaviour.
Half the battle, according to Marc, is making sure youngsters have something to do to take them off the streets, especially in the winter months.
“We wanted to create something that would inspire the young people we work with at Sport Changes Life so that, on the dark December nights, they have something to do,” added the Belfast native.
“For example, we have done a lot of work recently working in the Falls Park area. We have been working in the West Belfast area and these young people need something to do.
“This is us saying come and watch something that’s completely different. You won’t get the chance to experience something like this unless you travel to America.
“For the young people, it could be the spark for them, just like Kieran Donaghy, to engage them in a sport which could change their life and give them an education, a job and happiness.”
Tickets for the Basketball Hall of Fame Belfast Classic, which takes place on Friday, December 1 and Saturday, December 2 are available via Ticketmaster.
All day tickets cost from £16 per adult, £11.50 for child tickets and family tickets start at £42.