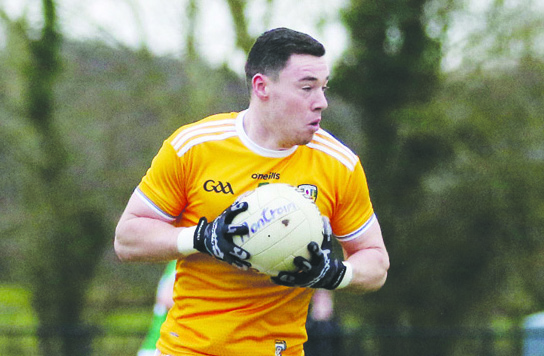 ANTRIM senior football captain Declan Lynch has reiterated the ‘Stay at Home’ message after contracting the Covid-19 virus himself.

Thankfully, Lynch is over the worst of it and his symptoms were relatively mild. However, the health scare for a leading inter-county player underlines one of the deadliest traits of the virus - that anyone and everyone is susceptible to the Coronavirus.

“I was training away myself and I ended up getting the virus myself a few weeks back,” stated Lynch.

“I am over it about two weeks now. I developed a cough and my mother works in the NHS so I was able to get tested because I’m living in the same household. I had to wait over a week and go over to the Mater Hospital. They have a pop-up test centre there facing the Mater and the test came back positive.

“All I had really was a cough, but I wasn’t aware that having no smell was one of the symptoms. I was doing alright, then maybe two Tuesdays ago I had a tightness in my chest for a couple of days. That was the only scare I had.

“I stopped training at that point and I was self-isolating in the house at that time in my room.”

He added: “It makes you pay heed to all the ‘stay at home’ messages. These things are in place for a reason.

“Some people may think are they are to stop you having fun or whatever, but they are in place to save people’s lives.

“It has shown to be working. Unfortunately, a number of people have died from it, but the death rate isn’t as high as they expected and that’s because people are doing the right thing.”

The Antrim skipper is back training, albeit with no fixed target in mind as the likelihood of county games being played this summer gets slimmer by the week.

Last week, the GAA outlined its commitment to finishes the football and hurling league games which affect promotion and relegation, but stated that it is “highly unlikely” that the inter-county Championships will begin before July.

Last Friday, a special congress approved emergency powers to alter the structure of this year’s Championship in light of the pandemic. Several provincial football Championship games along with the first rounds of the Joe McDonagh, Christy Ring and Nicky Rackard Cups had been scheduled for the weekend of May 9-10, but current restrictions in the South are set to last until May 5, leaving the GAA with little option but to postpone Championship fixtures. Additionally, the Ulster Council confirmed that the 2020 Ulster club football leagues, the Buncrana Cup (U16 football) and the Ulster minor football leagues have been cancelled with immediate effect.

The 2020 Ulster Minor Football Championship will revert to a knockout format with the competition redrawn to mirror the senior draw with the games acting as curtain-raisers to the senior fixtures were possible.

Antrim were due to face Fermanagh in Brewster Park later this month, but will now face the winners of the preliminary tie between Cavan and Monaghan.

On Tuesday, the Irish government banned all mass gathering of more than 5,000 people until at least the end of August, increasing the prospect of at least some of the Championship being played behind closed doors. While Lynch isn’t opposed to playing games without supporters, he has urged the GAA to give more guidance to players and to outline in greater detail what their contingency plans are.

“Anything to get games played, obviously with health and safety in mind, I’d be happy with,” said the Lámh Dhearg clubman.

“The GAA need to, within the next couple of weeks, give a firm commitment of what their plans are. Inter-county athletes are continuing to train as hard on their own as they would with a collective group.

“If this goes on for a longer period of time, you could be straight into county and club with no break for maybe two years. That’s not good for your physical or mental well-being. They need to let us know if this is going to be our ‘downtime’ then we need to use it as a rest period.

“In Division Four, we aren’t used to playing in front of big crowd. It would be hard for counties who are competing at the highest stage to be playing in empty stadiums.

“At this stage, people would settle for that rather than not playing game at all. It would keep people occupied and give people something to look forward to.”

In the meantime, the Antrim squad are training individually as they look to maintain their fitness levels throughout the lockdown. The GAA calendar may well be significantly altered in the coming weeks with club games possibly returning before county action.

The Saffrons were ideally placed to secure promotion from Division Four before the crisis and needed wins in the final two games against Wicklow (away) and Waterford (home) to clinch a top-two finish.

With sport on hold, the Antrim players have been given programmes to work on from home by strength and conditioning coach Fionntan Devlin. Lynch added that the players are also keeping in regular contact with each other via Whatsapp groups and are trying their best to cope with what is a testing time for everyone.

“We are all in the same boat. At the start, we were all unsure of what was going to happen,” said Lynch.

“We are staying in contact and I am feeding messages through to the squad. The squad are getting out individually and they are doing their sessions. Our coaches have sent through sessions that we can do on our own and we are staying on top of it as best as can and staying in a state of readiness.

“I’m using this break to get over a few niggles and injuries and work on a few of my weaknesses. Obviously, you’d rather be playing and finishing off the league, but people’s health is more important than anything at the moment.”