Magee hoping to leave Elvis ‘All Shook Up’ this weekend 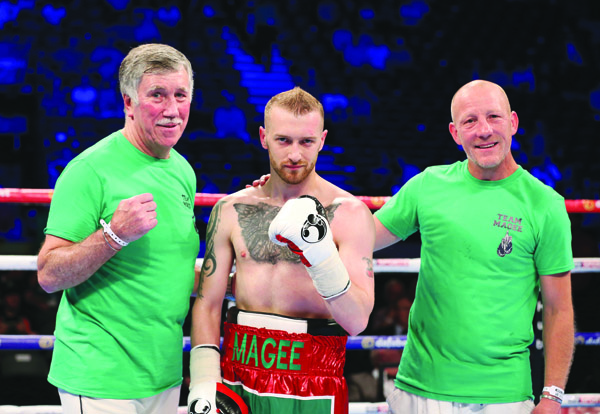 ASIDE from the fact that he has a famous forename, Sean Magee admits he knows little about his opponent for this Saturday’s ‘Danger at the Devenish 3’ clash against Elvis Guillen.

Magee is set to make his second pro appearance at the Ginley Promotions show this weekend, almost eight months after making his debut on the undercard of Ryan Burnett’s world title victory over Lee Haskins at the SSE Arena last June.

On that occasion he scored a first minute stoppage win over Jules Phillips and Magee is keen to make it two from two this weekend.

“Everything has gone well so far,” said Magee.

“The weight has come down and the sparring has gone well. So far, so good. I don’t know a lot about him. He has had about 49-odd fights so he is very experienced. He has been around for 10 years. Other than that, I don’t know much. He is a tough journeyman and he’ll be there to push me to the limit. I’ll have to box smart and do what I do best and hopefully I’ll get through it alright.

“I have trained hard it and I am ready for whatever he has to bring.”

Magee is trained by his uncle Eamonn and legendary trainer John Breen and he feels their experience will help him fulfil his goals in the pro ranks.

“The training is very good and the two of them are very experienced,” added Magee.

“I have learned a lot from both of them – they both push you to the limit. I am picking it all up along the way. The training is hard, but it is good at the same time and it is benefitting me a lot.

“They push every fighter hard to get the best out of you and I can see a big difference this year. The training camp has been great and I am hoping to show the benefits of that on Saturday night.”

Although inactive since June, Magee is confident he won’t show any rust-ring on Saturday night.

The Belfast boxer was originally scheduled to make his professional debut at the Finaghy Road North venue last April, but his fight fell through. A planned appearance on Kieran Farrell’s show at the Devenish last October didn’t materialise either after the show was pulled, but Magee insists he is ready to take on Nicaraguan, Guillen on Saturday.

“It was April 22 last year when I was scheduled to make my debut but, something happened with my opponent’s flight that morning and the fight fell through,” said Magee.

“I ended up getting a last-minute exhibition. It wasn’t the same. I still got a run-out and it worked out alright – I ended up on the Burnett bill.

“You are on the big stage and it was some atmosphere. It was unreal to get that opportunity, especially for my debut. Any fighter would be lucky to be on those kind of bills. I just have to keep doing what I am doing an , hopefully, I’ll get on some more big shows.
“I had trained for four rounds, but to get a knockout in the first minute of the first round on my debut was something else – it couldn’t have gone better.

“I was expected to be out in October on Kieran Farrell’s show, but the bill fell through. I picked up a wee injury too so it wasn’t meant to be.I haven’t been active since June, but I have been ticking away and training away. I have done plenty of sparring so I am ready to get back in the ring."