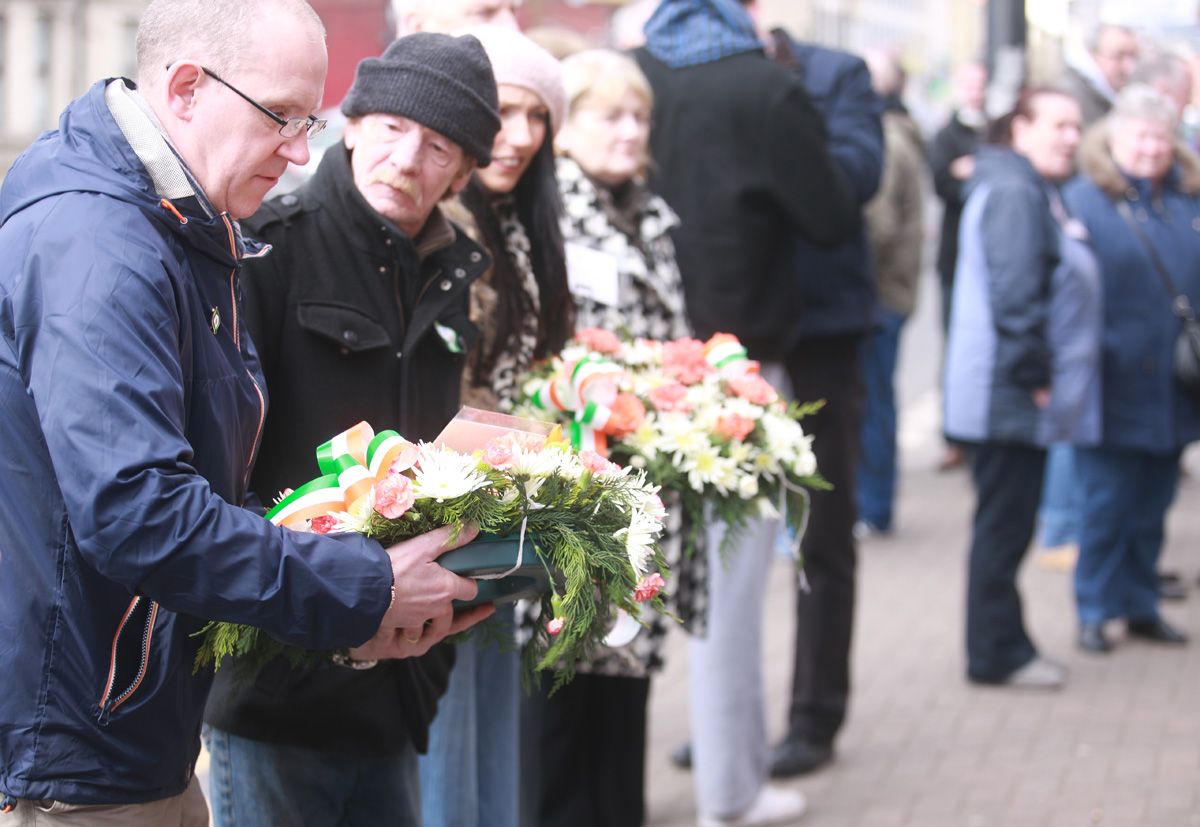 COLLUSION between British intelligence, the RUC, the UDR, the British Army and loyalist paramilitary organisations is a fact of life here. This is indisputable. A succession of reports have confirmed the extent to which loyalist death squads operated under the patronage of the British state.

This week the Police Ombudsman produced another report. It examines 11 killings in the South Belfast area, five of which occurred on Wednesday, February 5, 1992. That morning two UDA killers walked into Graham’s bookies on the Ormeau Road and opened fire. They killed five people and wounded nine others.

Claims of collusion between the UDA and British security agencies were dismissed at that time by many in the political establishment and most of the media. 30 years later and within days of the anniversary of that atrocity, the families were handed a Police Ombudsman’s report that confirmed collusion. It also confirmed that one of the weapons involved was part of the consignment from the apartheid South African regime brought into the North by British intelligence and its agents within the UDA/UVF and Ulster Resistance.

Collusion worked hand in hand with a British strategy which sought to demonise republicans and the wider nationalist community. Every effort was made by the British and Irish governments and our political opponents to marginalise and censor Sinn Féin. The five who were killed in the Ormeau Road bookies were the victims of this strategy. So too were the three people killed in the Falls Road Sinn Féin office the day before.

Last Friday we held a short ceremony outside the office to remember Paddy Loughran, Pat McBride and Michael O’Dwyer. They were shot dead when RUC officer Allen Moore walked into the office claiming to be a journalist. Within moments he had killed Paddy and Pat, who worked in the building; and Michael, a young man in the office with his two-year-old son to discuss a constituency issue; and wounded two others. Allen Moore went on to take his own life.

24 members of Sinn Féin and family members were killed during the conflict. Many others were wounded. Hundreds of nationalists were killed. Thankfully the war is now over. Though some are continuing it by other means.

We can make no sense of any of this except in the context of British government involvement in Ireland and the malign influence and shameful methods it has used and continues to use to maintain the union. The resignation of Paul Givan, the attitude of the DUP and the behaviour of Boris Johnson and his government are all part of all of this. The end of British rule in Ireland cannot come soon enough. The Good Friday Agreement has an agreed process to do this, if that’s what the people want.

Wait, what? Killer Allen Moore is on the RUC's roll of honour at its Knock HQ? I trust @ChiefConPSNI is aware of this and what it says to the public. @BBCTalkback

I look forward to the end of London rule here and to the liberation of the unionist and loyalist people along with the rest of us. Then, without the backing of English politicians, they will join everyone else to forge a new future based on equality.
Speed the day.

Republican women took the lead in opposing the 1922 Treaty


THE Proclamation of the Republic addresses itself to ‘Irishmen and Irishwomen’. This is recognition that there must be equality between women and men in the new Ireland.
When the details of the Treaty became public, Dr Kathleen Lynn, who was a member of the Irish Citizen Army and chief medical officer during the Rising, recorded in her diary: “Peace terms, but what a peace! Not what Connolly, and Malin and countless others died for.”

The Second Dáil voted on January 7, 1922, by 64 to 57 to endorse the Treaty negotiated just weeks earlier.

Five days later the Executive of the Cumann na mBan met in Dublin. Countess Markievicz chaired the meeting. The resolution opposing the Treaty was blunt and definitive. It said: “That this Executive Committee of the Cumann na mBan reaffirms their allegiance to the Republic of Ireland, and therefore cannot support the articles of agreement signed in London on the 6th December, 1921.” The motion was passed by the Executive by 24 votes to 2

One month later, on the February 5 – 100 years ago last Saturday – almost 500 women gathered in the Mansion House for a convention of the Cumann na mBan. It was the first of the national organisations to debate the Treaty. When the vote was taken, 419 members voted against the Treaty and 63 voted in favour.

The six women members of the Second Dáil all voted against the Treaty. They were Countess Markievicz, Kathleeen Clarke, Margaret Pearse, Mary MacSwiney, Kate O’Callaghan and Dr Ada English. Kate O’Callaghan’s husband Michael – a former Mayor of Limerick – had been murdered by the Auxiliaries. In her address to the convention she said: “The women of An Dáil are women of character, and they will vote for principle, not for expediency.”

“Dress suitably in short skirts and sitting boots, leave your jewels and gold wands in the bank, and buy a revolver.”
-Constance Markievicz#MnáMondays pic.twitter.com/kzapdvoUMm

Mary MacSwiney, whose brother Terence died on hunger strike, warned that should the Treaty be accepted she would become the Free State’s “first rebel”. Countess Markievicz said: “I am pledged as a rebel, an unconvertible rebel, because I am pledged to the one thing – a free and independent Republic.”

Republican women took the lead in opposing the Treaty. Sinéad McCoole in her book – No Ordinary Women – publishes the names of 552 women who were imprisoned by the Provisional Government and then the Free State government in Kilmainham Gaol, Mountjoy Jail and the North Dublin Union. The Free State government banned the Cumann na mBan in January 1923. In the decades that followed, the Cumann na mBan continued to play a crucial role in the struggle to end partition.

Despite what Yer Man says, growing older doesn’t have to mean growing old

I HAVE a sore back. I hurt it decades ago playing handball against a chap twenty years younger than me. It soon got better but every so often it comes back to trouble me, especially if I neglect to stretch and bend in the manner prescribed by the physio. It has been niggling at me for five or six weeks.

“It takes longer to heal as you get older,” Yer Man told me.  He thinks he is an authority on everything. But in this case he is right. So I wince my way gingerly through my daily routine. I noticed some time ago that some of my close friends have morphed into old men. I can see it in the way they walk. Their geriatric gait. The cautious way they traverse slippery or wet surfaces. Or cross roads. Or journey up inclines. Like oul’ lads. That’s the way my bad back has me.  Maybe that’s the way others see me.  As an oul’ lad. That is certainly Yer Man’s view.

I find that a bit disconcerting. I can still climb the cemetery wall. And clamber up Errigal if I take my time. Or the Hatchet Field. I can still póc a sliotar as well as much younger hurlers. But I can’t run too fast for too long. Or too far. I like a wee nap after my dinner. And I get stiff sitting in the car on long journeys. Or sitting anywherem now that I think of it. And my back is really sore.

“Don't talk stupid,” I rebuked him. “Once the good weather comes in and my back gets better I’ll be as good as new!”

“Your days are numbered,” he retorted. “You’ll never be as good as new aris. You’re more recycled material than new...”

Only it would hurt me more than him I could have punched him. Especially when he told me that I am in the last phase of my life. I’ve never thought of it like that. I don't mind growing older. It’s natural. If you’ve the right attitude, growing older doesn't mean growing old. That’s my philosophy. That’s what I told Yer Man.

“I might be in the Departure Lounge,” I said to him, “but my flight is delayed.”
“Such a yarn,” Yer Man said, “you oul’ lads are all the same. Delusional. The graveyard will never be full till you’re in it.”

That’s how we left it. He really knows how to hurt me. It’s very annoying. He should have more respect for his elders.