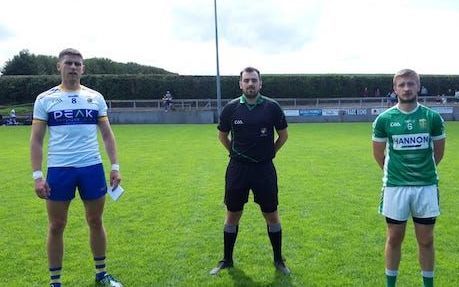 Jack Dowling, Conal Roberts and Pat Branagan before the game

A LATE goal from Ruairi McCann helped settle an absorbing contest in favour of Aghagallon on Sunday afternoon.

St Brigid’s had threatened to nick an unlikely victory having battled back from being five points down with 20 minutes to go to tie the game at 0-12 all.

A free from the trusty boot of Gareth Magee edged the hosts ahead once more and a brilliant delivery from Adam Loughran set up McCann for his injury-time major which ensured Aghagallon’s victory.

Quite how the game came down to such fine margins owes much to the fighting spirit of St Brigid’s as they looked down in the early stages of the second half.

Indeed, throughout Aghagallon’s scores seemed to come easier and in Magee they had a free-taker in top form.

They recovered from a poor start to take control of proceedings by the first water break.

An early point from Ethan Carleton got St Brigid’s off the mark and the resulting kick-out from Luke Mulholland didn’t travel the required distance. Jack Dowling won the hop ball and set up Peter Webb for his side’s second point with the first 90 seconds of the game.

A rather dubious free allowed Magee to score his side’s first and the corner-forward added another moments later to level the game after six minutes.

James Smith got his side’s third at the other end, but St Mary’s replied with back-to-back points from Caolan Farr and Marc McAfee with a stunning kick-out from Mulholland setting up Farr’s point.

After the first water break, a free from Webb cut the gap back to two, but the hosts finished the half strongly.

McCann restored his side’s three-point lead with Magee scoring a hat-trick of points, two from play as the first half drew to a close. Joseph Finnegan and Webb (free) plundered points for St Brigid’s who trailed 0-10 to 0-6 at the break.

The South Belfast side squandered a hat-trick of chance on the restart with the post denying Ronan McGrady either side of wides from Smith and Ryan Tweedie.

Magee took advantage to extend Aghagallon’s lead to five, but the home side were perhaps a shade fortunate to avoid being reduced to 14 men when corner-forward Daryl McAlernon was given a final warning rather than a second yellow for a rash tackle.

The game itself became lively and more physical as the second half progressed with St Brigid’s playing a much more direct style with put Aghagallon on the back foot.

Two frees and a well-struck 45 from McGrady reduced the deficit to two with 10 minutes remaining.

The former Antrim player converted another free from distance five minutes from time to leave the minimum between the sides.

When Adam Loughran’s shot dropped short at the other end, St Brigid’s goalkeeper Jamie Allen fisted the out to Magee, who was fouled 20 metres out. The ever-reliable attacker converted to give his side some breathing space, but it was short-lived.

Two points in as many minutes from Peter Henvey and McGrady levelled the contest at 0-12 all.

A foul on Loughran led to Magee converting his ninth point of the afternoon to edge Aghagallon ahead once more with 60 minutes played.

A bit of brilliance from the home side sealed the deal in injury-time when Loughran delivered a superb pass with the outside of the boot into McCann, who played the last quarter at full-forward. McCann out-fielded Conor King and swiftly turned and drilled the ball past Allen to wrap up a Senior Championship victory for St Mary’s.