McDonagh’s dark domain as comically bleak as ever 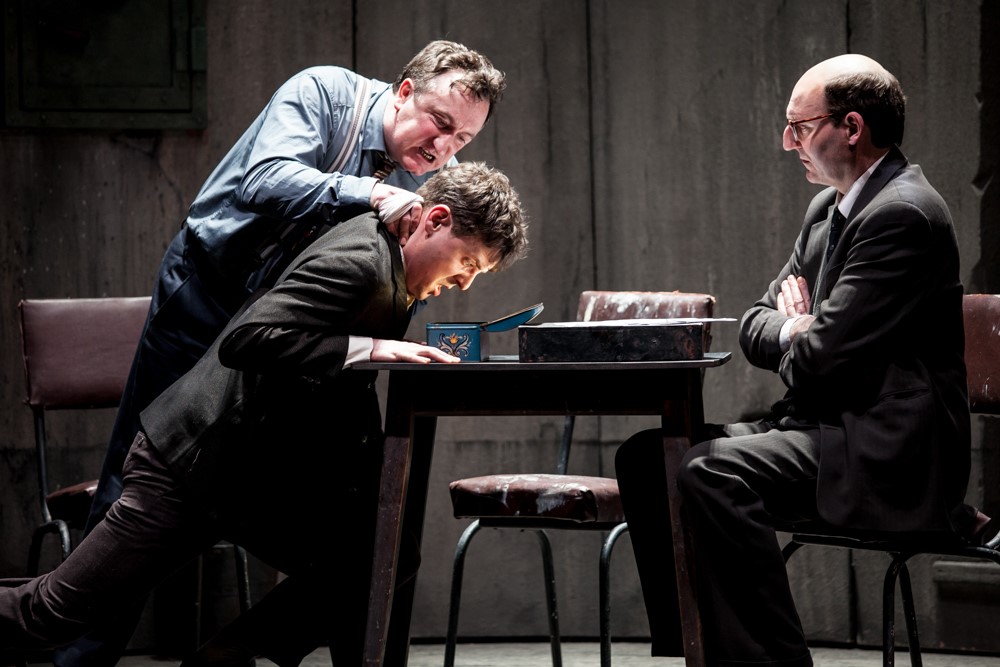 When you realise you’re laughing out loud during talk of child murder, abuse and torture you know you’re well and truly in Martin McDonagh territory.

Such was the case on Wednesday night at The Lyric theatre in Stranmillis when McDonagh’s 2003 piece, The Pillowman began a three-week run. Regarded as a seminal work by the man behind the movies In Bruges and Seven Psychopaths, The Pillowman is removed from the usual location of McDonagh’s stage plays. But while rural Ireland (The Beauty Queen of Leenane, A Skull in Connemara et al) is replaced by an unidentified totalitarian state, McDonagh’s dark domain remains as comically bleak as ever.

The northern premiere of the play opens in a setting familiar enough to Belfast audiences, in a cell with two thuggish cops interrogating a prisoner. The suspect here is a writer, Katurian K. Katurian whose grisly – and largely unread – stories seem to be the catalyst for a series of child murders. In a state that ‘likes to execute writers’ the outlook seems bleak for the author and while for him there’s ‘no such thing as happy endings’, for the audience this show is a stunner.

It will not be to everyone’s taste, it is truly as black as pitch but the writing, performances and stagecraft are all of the highest calibre. There are faces you’ll recognize from the screen, most recently Peter Campion (Katurian) and Gary Lydon (Ariel) from Love/Hate and David McSavage (Kutolpski) from The Savage Eye, the latter handling his first stage role admirably. The role and performance of Michael Ford-Fitzgerald, who plays Katurian’s ‘retarded’ brother Michal is particularly unnerving. His - and McSavage’s - use of that querical ‘modern Irish’ accent coats the delivery of the darkest of lines with a disturbingly comic normality. However Campion is outstanding as the terrified writer and for the play’s two and a quarter hour duration - the entire period of which he is onstage - he deftly mixes its potent concoction of humour and horror.

This of course is a theme of McDonagh’s, the horrific and the comic walking side by side but it has never seemed so vivid as here on the Lyric stage. Supported by Owen MacCárthaigh’s stunning set and Carl Kennedy’s musical menace, director Andrew Flynn rightly steers away from visual violence, the script’s belly laughs and gut wrenching revelations land more than enough emotional body blows in a piece ostensibly about storytelling but which looks at so much more.

The Pillowman runs at The Lyric theatre in Stranmillis until 19 April from Tuesday to Saturday at 7.45pm and Saturday and Sunday matinees at 2.30pm. Off-peak tickets cost £20. Peak times (Thurs, Fri & Sat evening) cost £24.50. Go to the website at www.lyrictheatre.co.uk or call 90381081.