McKenna: ‘We need to lay down a marker against London’ 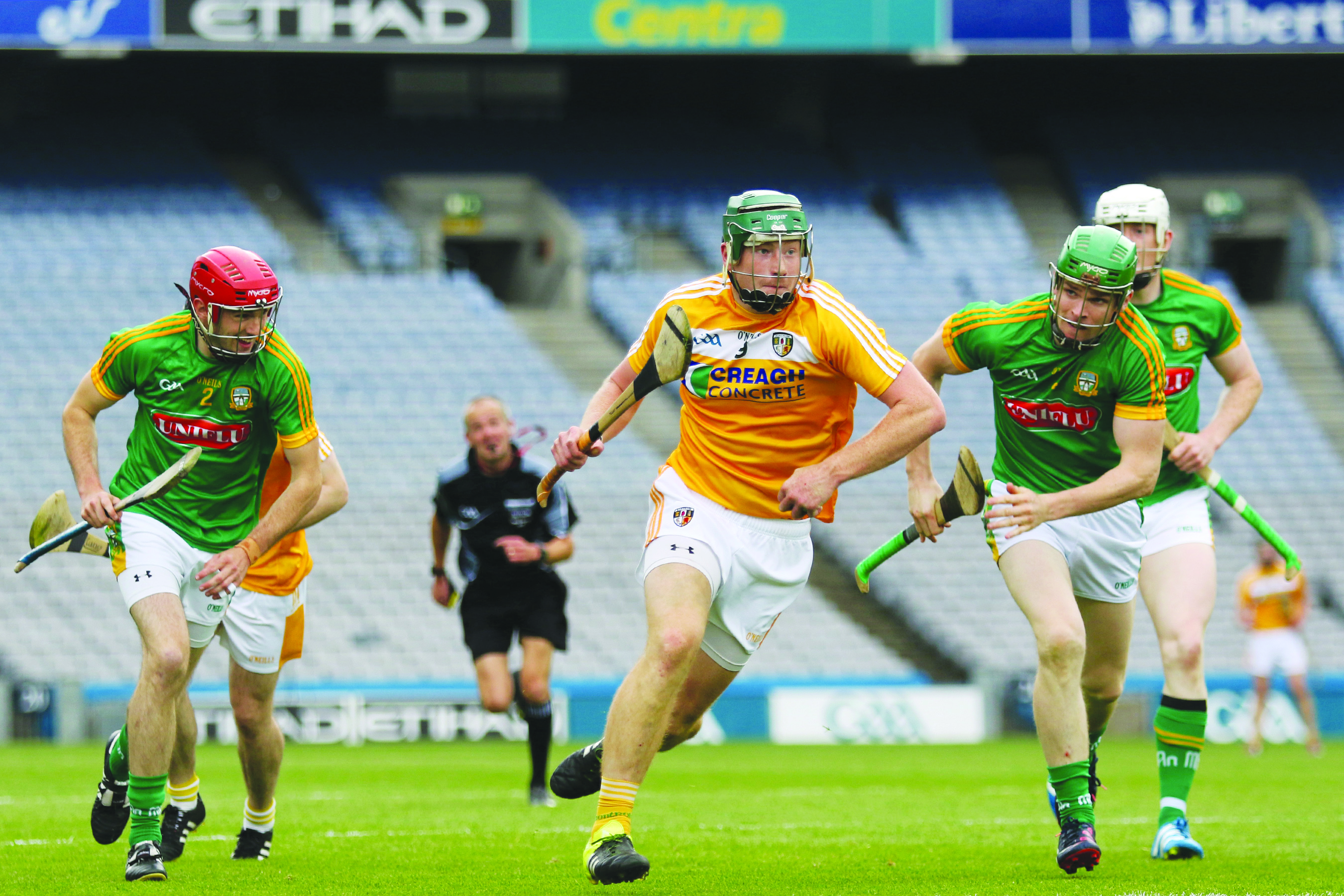 Niall McKenna, pictured in action against Meath in the Christy Ring Cup final replay last year in Croke Park, has urged Antrim to make a statement of intent against London in Sunday’s National Hurling League opener in Corrigan Park

ANTRIM begin their 2017 National League campaign this Sunday with an eagerly-anticipated rematch with London in Corrigan Park. Rarely would a game against the Exiles garner much excitement amongst the Saffron faithful, yet the manner and the fallout from London’s surprise win Ruislip last March shook Antrim hurling to its core.

The 1-21 to 1-19 defeat proved to be PJ O’Mullan’s last game in charge of Antrim and followed previous losses to Westmeath and Carlow.

The new management team of Terence McNaughton, Dominic McKinley, Gary O’Kane and Neal Peden were installed on the eve of the Championship with the mission statement of restoring pride in the jersey.

Pre-season results suggest Antrim’s fortunes may be on the up. Although well-beaten by Kilkenny in the Walsh Cup, they battled gamely against the Cats in the first half while wins against Westmeath and DCU ought to have the Saffrons in a good frame of mind ahead of their Division 2A opener.

Niall McKenna says Antrim simply must lay down a marker for the remainder of the season when they host the Exiles this weekend.

“We owe them one after last year,” said McKenna “It is a good way to start the league – you couldn’t ask for a better game and to be playing them at home as well.

“It was terrible in the dressing room after the game. I think we took them for granted – we underestimated them. When we went out and they put it up to us, it was a shock to the system. It was a terrible journey home.

“They were good and they were in good shape. This year, with the training we have been doing, hopefully we can just blow them out of the water.

“We need to set a marker down for this league and show people that this is going to be our year and we have more about us this year.”

McKenna is hoping a decent Walsh Cup campaign and a vigorous pre-season training regime will stand to the Saffrons as their season begins in earnest. “We were there or thereabouts with Kilkenny in the first half,” reflected McKenna.

“We did rightly. In the second half, they just showed their class. To score 18 points against Kilkenny is good for any county. “They had a lot of their first team out. Then to play against Tipperary and to be beating them in the first half – that is a great boost for everyone. We just have to take the positives from it. “It was a good experience for ourselves and the management to play those two teams.”

That experience could prove vital in the coming months as Antrim face a busy run of fixtures. It was announced last month that the Ulster Senior Hurling Championship would be moved forward this year to April meaning Antrim’s season will end when their Christy Ring Cup campaign does. With their inter-county season now shortened, McKenna is hoping to get off to a flying start this Sunday in Corrigan Park and says promotion from Division 2A is very much on the radar.

“If we get a bit of momentum going, I think it will be very hard for any team to stop us. It is very important to get off to a winning start. “There is a good buzz and a good atmosphere about the place as well. At the start of the year, we were told how hectic training was going to be.

“Everyone had put their shoulder to the wheel and give 100 per cent at every training session. “You can see the intensity we train at now – it has increased massively. The attitude towards everything has been top class.” He added:

“We knew the skill was there, but some of the teams we were playing last year maybe wanted it a bit more. “That’s why so many of our games were so close, I don’t think we ran away with any games last year.

“This year, hopefully, we can bring that intensity and that hunger to our game.”

Antrim’s season could well hinge on how their National League campaign goes. Last season, the Saffrons never fully recovered from their shocking league defeat to London. The earlier defeat to Carlow ensured promotion was out of their reach but the loss to the Exiles was the catalyst for a root-and-branch review of hurling structures within the county.

While they remain a work-in-progress, Antrim have enough talent to ensure they make a winning start to their league schedule on Sunday. The return of Conor McCann has added some much-needed experience in the engine room while Paul Shiels edges closer to full fitness.

Additionally, Cushendall defender Arron Graffin looks set to return to the county fold in the coming weeks after travelling last year following the All-Ireland Club Championship but Neil McManus is set for a spell on the sidelines with a suspected broken cheekbone.

Newcomers Stephen Rooney, Tiernan Coyle, Deaglan Murphy and Joe Maskey will also challenge for places after impressing in pre-season. All the signs are positives for Antrim but results are all that matters and the hosts should secure both points at Corrigan Park on Sunday.