MIKE TOMLINSON: There goes the planet; a million pallets up in flames is only tip of the iceberg 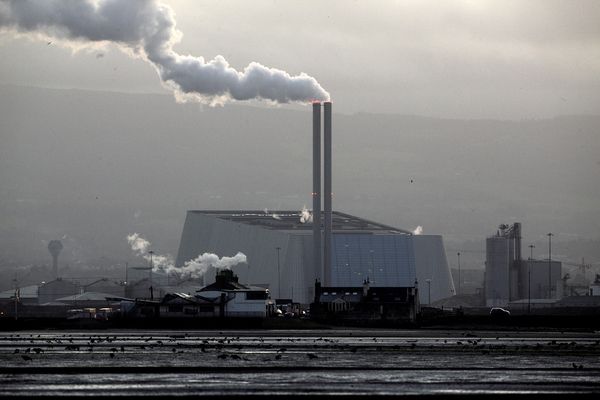 From ice cores, it is estimated that the earth’s atmosphere consisted of 276 parts per million (ppm) of carbon dioxide (CO2) when the Battle of the Boyne was fought. The beacons that were lit to guide King William’s forces into Belfast lough in June 1690 made a negligible difference to the prevailing level of greenhouse gases. Can that be said of today’s bonfires?

When the main political cheerleaders for bonfires, and a voluntary code of practice for bonfires, formed their political party 50 years ago, CO2 had reached 324 ppm. So in the 280 years between 1690 and 1971, CO2 concentration increased by 48 ppm. By the time of the Good Friday Agreement in 1998, the concentration of CO2 in the atmosphere had risen to 368. On 11 July 2021, it had reached 417 ppm, an increase of 49. So in the last 23 years the concentration of CO2 in the atmosphere has risen by more than over the 280 years to 1971. No wonder some scientists fear we are beyond the point of no return.

The signs are everywhere, from floods and storms in some parts of the world, to wildfires and record temperatures in others.

While individual action is part of the solution, this will only take us so far because decarbonisation of economic activity requires unparalleled levels of international political agreement and urgent concerted action to curb the power of fossil fuel corporations who have clearly understood their contribution to global warming since the 1970s.

Last month was the fourth warmest June on record across the globe. The ‘heat dome’ covering Canada and the US has claimed hundreds of lives. The village of Lytton in British Columbia was destroyed by a wildfire within fifteen minutes, the day after recording Canada’s highest ever temperature of 49.6 degrees centigrade – for three days in a row. Sixty wildfires are currently devouring tens of thousands of hectares of forests, with plumes of smoke easily visible to weather satellites in space.

At least 42 people in Germany have died after floods caused by record rains. Homes were swept away or collapsed, and dozens were reported missing.

Officials linked the unusual extreme weather to the climate crisis: A weather service says about 2 months of rain fell in 1-2 days. pic.twitter.com/IHAbJKSXMa

The heat has caused a serious drought for western states in the US. Water is running out for the 40 million people who rely on Lake Mead which was formed when the flow of the Colorado River was held up by that famous public works project of the great depression, the Hoover Dam. The level of the lake is at an all-time low and only about a third full.

Similar conditions prevail in Northern Europe. The wildfires in Siberia at the moment cover a staggering 800,000 hectares. As in Canada, rural settlements are being consumed by the fires but the greatest fear is that the permafrost and peatlands start to thaw, releasing vast quantities of CO2 in the process. The smoke from the fires is depositing soot on snow which then absorbs more of the sun’s rays resulting in more warming. This year, Helsinki has recorded its highest average temperature since records began in 1844. And now we hear that the Amazon is no longer acting as a carbon sink but is a net contributor to global warming.

Breaking News: Parts of the Amazon are now emitting more carbon dioxide than they absorb, reducing the forest’s ability to be a buffer for climate change, a new study found. Deforestation and global warming have contributed to the change. https://t.co/bzj2E1Y5CW

We are all familiar with the agreement achieved at the 21st meeting of the Conference of the Parties (COP21) held in Paris in 2015. This set a ‘preferable target’ to keep global temperatures no more than 1.5 degrees centigrade above ‘pre-industrial’ levels – the reference period being 1850 to 1900. By 2015, we had already reached 1.0 degree and current estimates of the rapidly accelerating trend suggest we are now at 1.2 degrees above pre-industrial levels.

It is worth reminding ourselves of the basic science behind global warming and also of the huge efforts that have gone into denying that it has anything or much to do with human activity, notably the burning of fossil fuels. The earth’s atmosphere consists of a blanket of gases which stop some of the sun’s energy from escaping. The more CO2 and other gases in the atmosphere, the less heat escapes and the planet warms up – hence global warming. This has come to be known as the ‘greenhouse effect’ and the basic science behind it was established in the 1850s.

The discovery of the greenhouse effect is usually attributed to John Tyndall who was born in County Carlow in 1820. Tyndall established that heat passed through some gases in the atmosphere but was held up by others, notably carbon dioxide. It took some time before scientists made the connection between human activity, such as the burning of coal, and climate change.

"Few buildings are still standing, but the ones that are seem to have escaped, without reason, entirely unscathed. One house sits in immaculate condition, its green lawn still vibrant; a jarring contrast to the surrounding charred properties." https://t.co/W766RpP8Z2

A recently published book by Alice Bell – Our Biggest Experiment: A History of the Climate Crisis – tells us that it was in fact an American woman who first demonstrated that CO2 absorbs the sun’s heat more than other gases. Bell describes Eunice Newton Foote as a scientist, inventor and women’s rights campaigner who was living in New York and experimenting on gases and heat. While this work was theoretical with little practical application at the time, Foote nevertheless observed that “an atmosphere of that gas [CO2] would give to our Earth a higher temperature”.

Bell’s book provides a rich account of the interests behind global warming and the huge efforts that have gone into climate change denial and scepticism. Just as the tobacco companies sponsored research to cast doubt on the established link between smoking and lung cancer, so big oil deliberately tried to counter the idea that burning fossil fuels caused climate change, especially from the late 1980s onwards.

One tactic was/is to attack the climate scientists and their measurements and models. A particular target was Michael Mann who first talked of the ‘hockey stick’ shape of the graph of rising global temperatures over the past thousand years. Mann describes personal attacks from Fox News, the Wall Street Journal and from hostile congressional hearings and investigations. Much of this effort was sponsored one way or another by fossil-fuel interests or front organisations whose tactics included legal actions directed at Mann personally.

In his latest book – The New Climate War – Mann shows that the fossil fuel industries want to convince us that the solution to climate change lies in personal responsibility: “the car you drive, the food you eat, and the lifestyle you live”. While individual action is part of the solution, this will only take us so far because decarbonisation of economic activity requires unparalleled levels of international political agreement and urgent concerted action to curb the power of fossil fuel corporations who have clearly understood their contribution to global warming since the 1970s. Otherwise, the vested interests behind the carbonised economy will continue to frustrate and fake change.

One way of focusing minds is to think of the 1.5 degree threshold as a fixed carbon budget: from now on we, as in all of us on this earth, may only release 420 gigatonnes of CO2 to have a 50/50 chance of keeping within the threshold temperature. That may sound like a big number – a gigatonne is a 1,000 million tonnes – but it isn’t, as this budget may well run out in less than ten years at current rates of emissions. In 2018, Ireland (North and South) alone was responsible for 81 million tonnes of CO2 emissions: 20 million tonnes in the North and 61 million in the South. That is 12.6 tonnes per person in the South and 10.3 in the North. The EU average is 8.2 tonnes per person. When the budget is limited, every tonne counts.

When burning the flag of your neighbours and friends becomes “culture”. pic.twitter.com/TBHOkggo62

Imagine that we have to bring these figures right down as soon as possible. Can emissions from bonfires really be justified in such circumstances? Has anyone done the maths? If not, why not? Let’s have a go at a back-of-an-envelope calculation.

Thanks to the architecture department of the bonfire committees, the design of bonfires is modular and based on the euro pallet. Bonfire builders have themselves suggested that the larger bonfires, such as Craigyhill in Larne, or Corcrain, Portadown, are built from over 16,000 pallets. There is no audit of bonfires so we don’t know how many monster bonfires there are but let’s say ten. Let’s also say that the remaining bonfires average 5,000 pallets.  This year there were around 235 bonfires – the BBC said 237. A euro pallet weighs between 20 and 25 kilos depending on water content so call that 22.5 kilos. Burning a kilo of wood releases 1.65 to 1.80 kilos of CO2 – take the average, 1.725 kilos.

Crunching these numbers, and adding in a few anti-internment bonfires, brings us to a grand total of 50,456 tonnes of CO2, or the average annual emissions of 5,000 people. And this is just the start because bonfires produce much more than CO2, especially when painted, whatever the colour. Incredibly, some bonfires are still built with tyres. When burnt, tyres pour many toxins into the air (and ground) including substances that are thousands of times more ‘mutagenic’ and cancer causing than the particles and gases from burning wood.

Given the climate emergency and the risks to public health, bonfires are hard to justify. But we are a long way from the political consensus that would be needed for a ban and the enforcement of a ban.