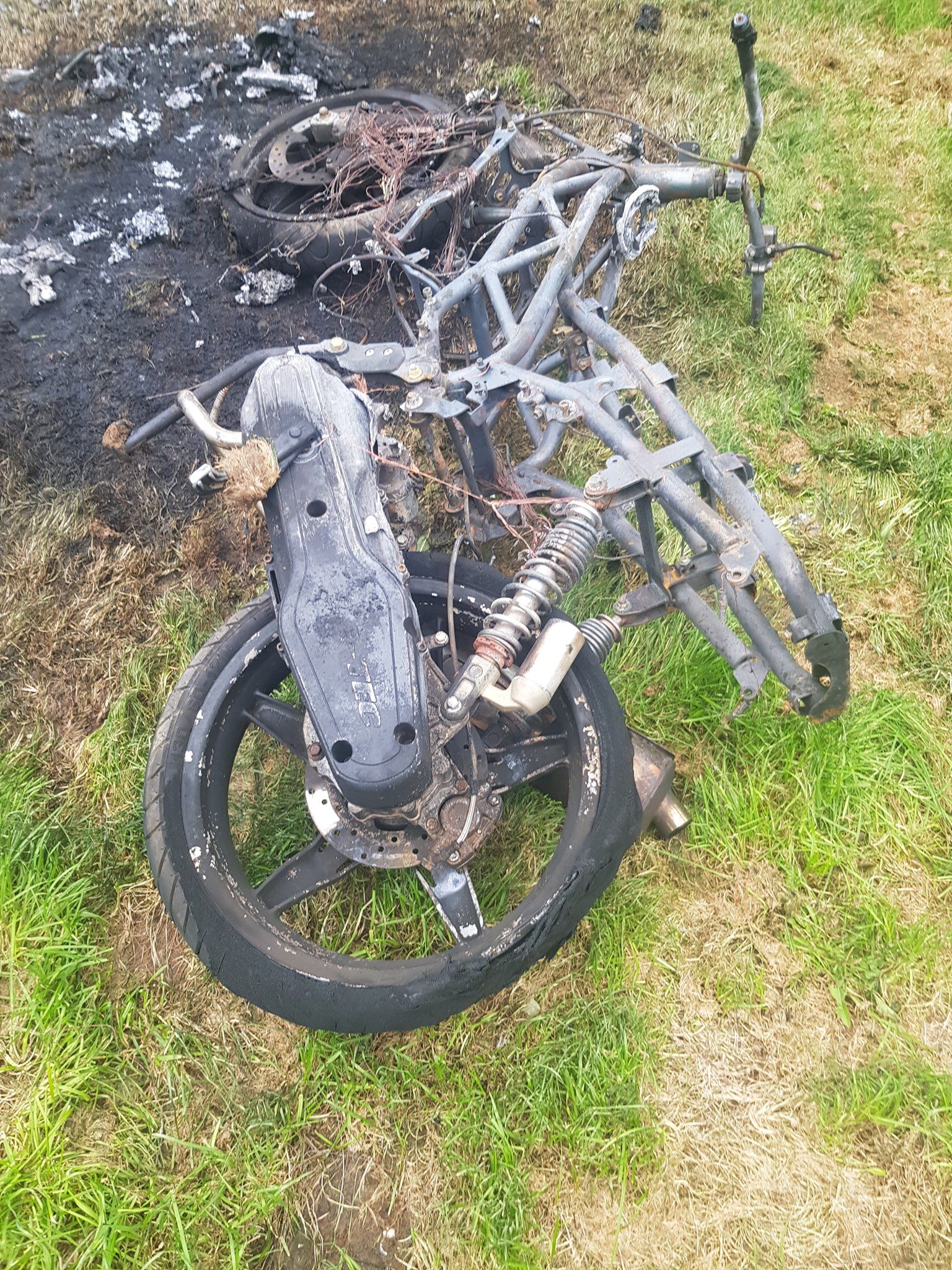 DESTROYED: The black CPI GTR 50cc motorbike was stolen and later found burnt out in Ardoyne

A NORTH Belfast mother has been left "gutted" after her son’s motorbike was stolen and burnt out.

Roisin Hale was awoken by a neighbour in the early hours of Wednesday morning (September 9) after they realised the bike was missing from the house in Cardigan Drive, off the Cliftonville Road.

It was later found burnt out in Jamaica Way in Ardoyne on Thursday afternoon.

The CPI GTR 50cc motorbike belongs to her 16 year-old son, Francis who only purchased the vehicle in June.

Roisin said her son was following in the footsteps of his late father who had a love for motorbikes.

“He is passionate for motorbikes,” she explained.

“His father, also Francis died in a motorcycle accident in May 2010, when my son was just six years old.

“Francis always wanted to follow in his daddy’s footsteps. They always went to watch the bikes and stuff.

“On his 16th birthday, I got him his training and he absolutely loved it. Because of his age, he is only allowed a 50cc motorbike. We eventually found one in June and Francis paid with it from his credit union money which he has never touched.

“It is a black CPI GTR 50cc. There are very little of them about. It is a very distinctive bike. When we were searching for 50cc’s, it was all scooters that came up and we had to really search hard to find that motorcycle-style one.”

Roisin says her son has been left disgusted after what happened.

“I was woken up by my neighbour in the early hours of Wednesday morning to say someone had stolen Francis’ motorbike. It was about 4am.

“I woke up Francis and told him. He jumped and was just absolutely disgusted.

“The motorbike was locked up but the thief had cut through the metal of the lock. The lock was then thrown into a nearby bush.

“Gutted isn’t the word for it. He had that bit of confidence and independence with the motorbike. He built up his confidence to drive about by himself, to school and to the gym.

"I couldn't believe when it was found burnt out.

“It was a real achievement for him to get a motorbike but had to wait until he was old enough to get one.

“I would like to thank everyone who has sent me message of support and shared my appeal on Facebook. It has been really heartfelt.”

Police are appealing for information regarding the theft.

A PSNI spokesperson said: "Enquiries are continuing and we would appeal to anyone with any information or who witnessed the incident to contact police on 101, quoting reference number 170 of 09/09/20.

"Alternatively, information can also be provided to the independent charity Crimestoppers on 0800 555 111 which is 100% anonymous and gives people the power to speak up and stop crime."