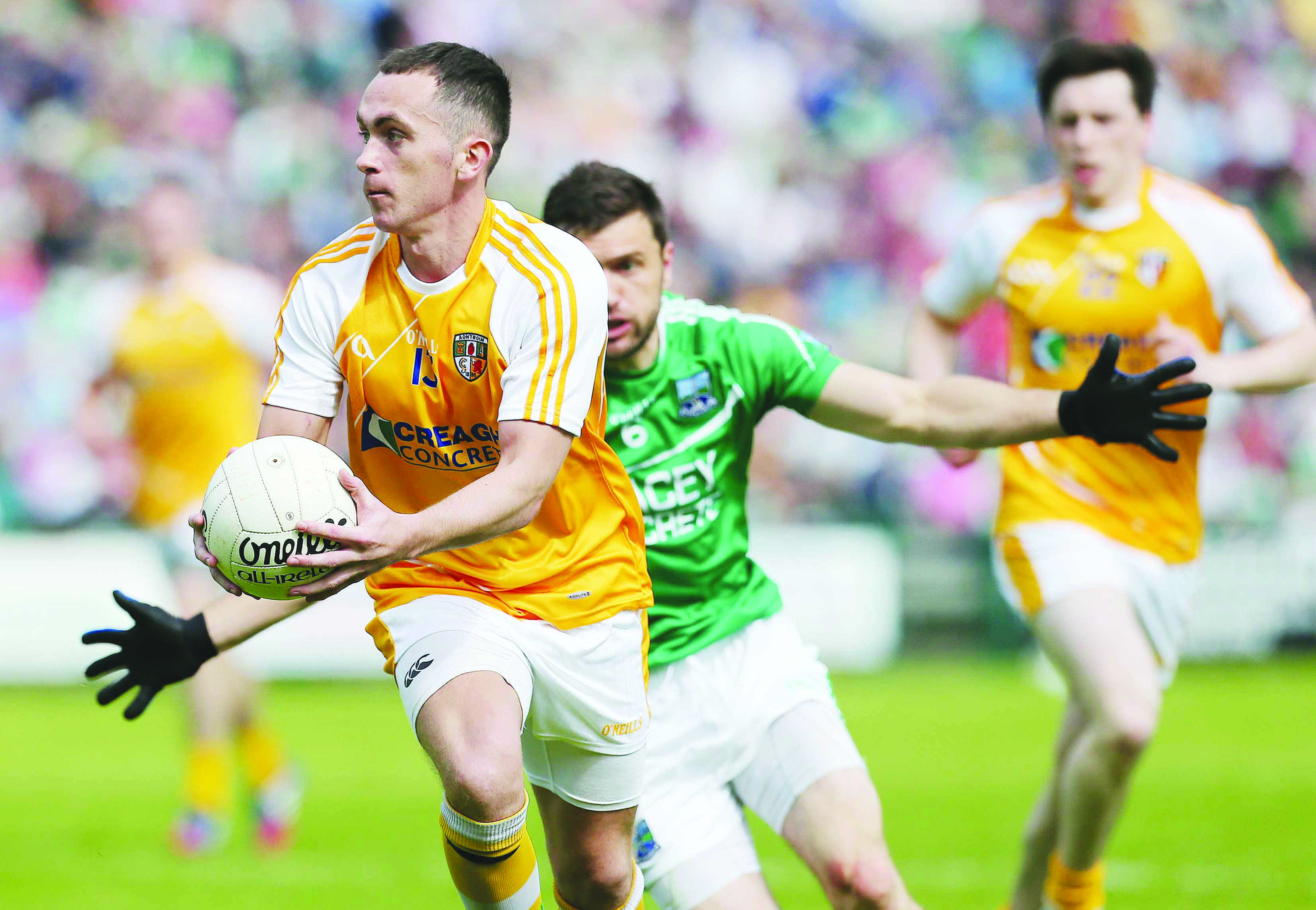 THE plight of the dual player in the GAA has been well documented and the days of inter-county players juggling hurling and football seem to be all but over. Yet, a few players seem keen on the idea of playing football and soccer at an elite level with Antrim’s Brian ‘Bam’ Neeson the latest to try and commit to two codes. Neeson is first choice goalkeeper for Irish Premiership outfit Carrick Rangers and has recently returned to the Antrim football squad after opting out in 2015. The St John’s clubman wasted no time in announcing his return to inter-county action in the Dr McKenna Cup and his stunning lobbed finish against Queen’s went viral on social media earlier this month. Antrim’s campaign ended on a disappointing note a week later in Omagh as Tyrone crushed the Saffrons by 10 points after a listless game in Healy Park. Just 24 hours prior to the Tyrone clash, Neeson was at Solitude helping Carrick claim a share of the spoils in a thrilling 3-3 with Cliftonville. Despite the pressure, ‘Bam’ insists he can balance the demands of both codes. “I am coping alright with the demands - it is just about getting to that level of fitness and getting the rest days in when I can,” said Neeson. “At the minute, I am training with Carrick on Tuesday night and Thursday night and the Gaelic is Monday, Wednesday and Friday. “It was worked okay so far. As long as people are in the know, that’s all that counts.” While a point at Cliftonville was a fine result for Carrick, Antrim’s 10-point defeat was a comedown for Neeson. Few would have expected the Saffrons to claim anything from their trip to Omagh but Antrim’s failure to score from play was the most disappointing aspect of the game for the visitors. “It was a good result for us up at Solitude - it is hard to go there and get something out of the game,” said Neeson. “Tonight (against Tyrone) was completely different. It was very different even from the Queen’s match. When we conceded that early goal, it put us on the backfoot. “We came out and played much better in the second half. We worked as a team better. “We can take a lot of positives from the second half and just forget about the first half and look forward to the Carlow match.” If Antrim can learn the lessons from the Tyrone defeat, they should make a good push for promotion in the spring. Antrim’s Division Four campaign gets underway with a tough trip to Dr Cullen Park to face Carlow on Sunday. The Saffrons have failed to escape the basement division in each of the last two seasons. The race for promotion from Division Four could take on added importance if the Central Council proposals announced last weekend are passed by Congress next month. The Tommy Murphy Cup has been resurrected in a new guise that will see the eight teams from Division Four enter into a ‘B’ Championship, instead of playing in the All-Ireland Qualifiers, if they fail to reach their provincial final. Although any proposals would not come into effect for the forthcoming season, gaining promotion remains Antrim’s main objective for the 2016 campaign and Neeson believes making a winning start against Carlow would give the Saffrons a great platform to challenge for a top two place. “The Carlow game is the main aim. I think we have learned from each game and we have good fitness under our belt,” said the St John’s attacker. “We have got three tough games under our belt and we have a couple of weeks to improve on things before the Carlow game. “If we beat Carlow, we have two home games back-to-back after. We actually have four home games this year. If we beat Carlow and win our home games, we will have 10 points and that has been enough to get promoted in recent years. “We have to try and get off to a good start against Carlow. It is not the end of the world if we don’t but I think the boys are set on it and it would be a great stepping stone to start league.”