Newington hope to end season on a high with Intermediate Cup 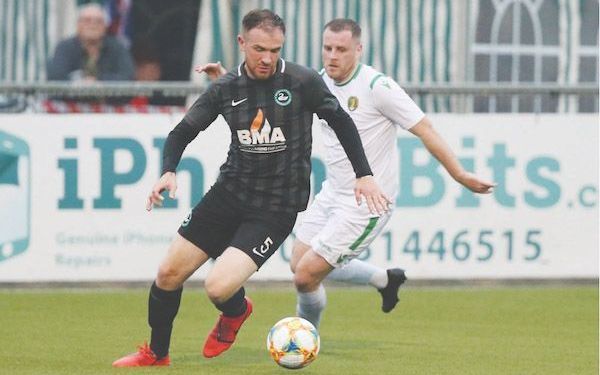 NEWINGTON manager Conor Crossan has expressed his disappointment at the IFA’s decision to schedule the Intermediate Cup final for Annagh United’s pitch on Thursday night.
The Ton will take on their Premier Intermediate League rivals Dollingstown in the decider following their 2-1 win over Belfast Celtic at Seaview last Friday night.
Dollingstown were in action at the same time and they defeated St James’ Swifts 2-0 at Annagh to book their place in the decider.
However, the decision to use the Tandragee Road venue hasn’t done down well and Newington skipper Richard Gowdy took the Twitter to label the decision not to play the game at Windsor Park as “ridiculous” while Crossan feels Seaview would have been a better alternative venue.
“It is a strange choice of venue especially with it being so close to Dollingstown as well,” said Crossan.
“I said to them on Friday after the game when we heard rumours about the venue was that we have to go and win it no matter where it is played.
“It is disappointing that the IFA couldn’t find a more traditional venue for the final – the likes of Windsor. I know the Irish Cup final is on Friday, but there are lesser competitions that are getting better venues than the Intermediate Cup.
“Throughout the competition, our team talk has been about lifting the trophy at Windsor Park, I’m sure other teams will have said the same.
“It is disappointing for the players. Instead of it being the road to Windsor Park, it is the road to Annagh.
“These boys have played every game away from home in the Intermediate Cup and the Steel and Sons and they play the final at Annagh?
“I think the Junior Shield final is being played at Seaview and you have two teams from the Ballymena area in it (Harryville Homers and Ahoghill Thistle). Why didn’t they play that game in Ballymena and take the Intermediate Cup final to the likes of Seaview?”
Newington are also sweating on the availability of Robbie McVarnock ahead of Thursday’s final.
The striker picked up a fifth booking in last Friday’s win over Belfast Celtic. That is set to rule him out of the final, but Cliftonville’s arbitration case against the IFA has given Newington hope that he could be cleared to play. Crossan says the club have sought clarification from the IFA ahead of the decider.
The North Belfast men confirmed the Steel and Sons Cup form with Belfast Celtic in last Friday’s eagerly-awaited semi-final clash at Seaview.
Crossan’s side won on penalties when the sides last met at the venue before losing out to Linfield Swifts on Christmas morning.
However, they made a strong start and Patrick Downey’s strike midway through the first half gave them a 1-0 lead.
Former Cliftonville striker Jay Donnelly threatened a few times at the other end for Belfast Celtic, but Newington were more clinical and doubled their advantage early in the second half when Anthony McGonnell’s effort beat Patrick Saunders to make it 2-0.
A penalty from Joshua Lynch on the hour mark set up a tense finale as Stephen McAlorum’s side brought it back to 2-1.
However, Newington held firm in the closing stages to book their place in Thursday decider.
Crossan says he was delighted with how his team fared in their first competitive game back after lockdown.
“I was delighted after not having a competitive match for so long,” said Crossan.
“I don’t think we did ourselves justice against Belfast Celtic in the semi-final of the Steel and Sons Cup. We were poor enough, but we worked hard for each other. We knew we had more to come and we were pretty confident going into Friday night’s game.
“The attitude in the warm-up and everything before hand was spot on and we didn’t really focus too much on Belfast Celtic – I knew our boys were up for it.
“Once we went 1-0 up, I felt we were going to win the game. I know one of the reports from the game said that they gave us an onslaught in the second half, but I didn’t see it that way.
“I felt we were the better side. Obviously when we were 2-1 up, they had a few half chances, but we also hit the post.”
Crossan is also hoping the hurt of losing the Steels and Sons final to Linfield Swifts on at Christmas will drive his side on against Dollingstown.
“Hopefully it will spur them on, that hurt of losing the final on Christmas day,” added the Newington boss.
“Hopefully they don’t want to feel that same pain again and it will give them that little bit of hunger and desire to go and lift in the Intermediate Cup.
“The club has never been to an Intermediate Cup final before – we’ve lost two semi-finals in recent years.
“They are there to make history and, hopefully, they can do it this year.”
With the Premier Intermediate League campaign curtailed, the sides only met once this season with Newington claiming a 1-0 win at Planter’s Park last September.
However, Dollingstown finished third in the league, two places ahead of Crossan’s men and they will need to be at their best if they are end a surreal 2019/20 season with a maiden Intermediate Cup success.