North Belfast schoolkids urged go to the next level 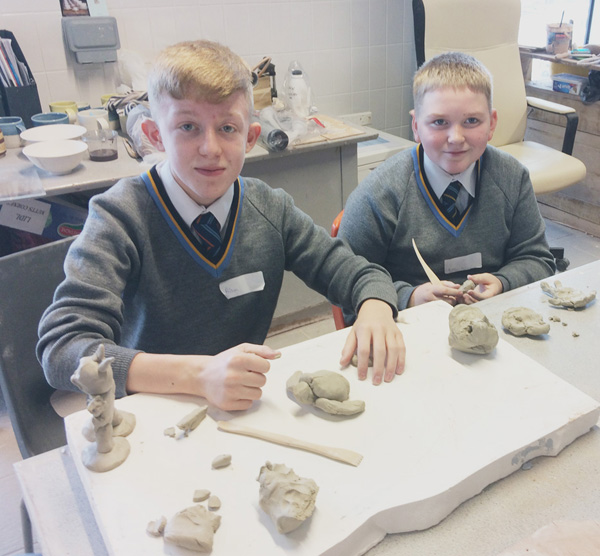 VALUABLE LESSONS: Aidan Bradley and Mathew Murphy get to grips with clay modelling

LOCAL Young people were invited to the University of Ulster on Friday to take part in workshops that it is hoped will increase the number of working class schoolkids applying to college.

Pupils from Edmund Rice College were among a number of schools to be given the chance to meet professors and get stuck into degree level challenges as part of the ‘Different Dreams’ initiative.

Among the boys showing off their artistic skills were Aidan Bradley and Matthew Murphy.

Whitewell lad Aidan was given a talk on the art of ceramics and he and Matthew had a go at clay modelling.

“They have taught us a lot of things today,” said Aidan.

“My sister is at university but she is the first person in our family to go. I would definitely think about applying to college now.”

Matthew said the day was a real eye-opener.

“It’s been very good,” he said. “I’ve enjoyed what they have been teaching us.”

“Different Dreams is for Year 10 pupils who may not be considering third level education as a choice, to give them the opportunity to enjoy some of the wonders of Ulster University’s Belfast campus on York Street,” he said.

“The pupils had an opportunity to take part in three workshops including Basic Skills in Marketing and Entrepreneurship, A Future in Gaming, Introduction to Basic First Aid, Smart Phone Photography, Ceramics – the Art of Clay and Creative Movement, and A Pathway to Acting. The event will hopefully make young people realise there are different paths available.”

“Today gives the young people a chance to see what it’s like to sit in a lecture theatre and see what it’s really like,” he said.

“It’s not that the students are told they aren’t good enough to go to university, it’s just that if there’s no tradition in the family of a college education it might not be thought of as an option.”

Ciaran said although his parents hadn’t followed the route of third-level education, there was a tradition in his family.

“My mother’s side went to university and my granda has business degrees coming out his ears but I want to go to college to study criminology and politics.

“I would be the first in my immediate family to go to college.”

The Different Dreams event took place as the university applications body UCAS revealed that applications by school pupils in the north to third level colleges had dropped by five per cent.

Here and in Wales, application rates for 18-year-olds have fallen slightly from last year’s record levels and in Scotland they remain unchanged.

The application rate from young people living in areas least represented in higher education has increased to 22.1 per cent across the UK, the highest level ever recorded.

In England, the application rate from these areas increased to 22.5 per cent, the highest level recorded. In the north the rate remained stable at 24.4 per cent, while in Wales it decreased to 19.7 per cent.