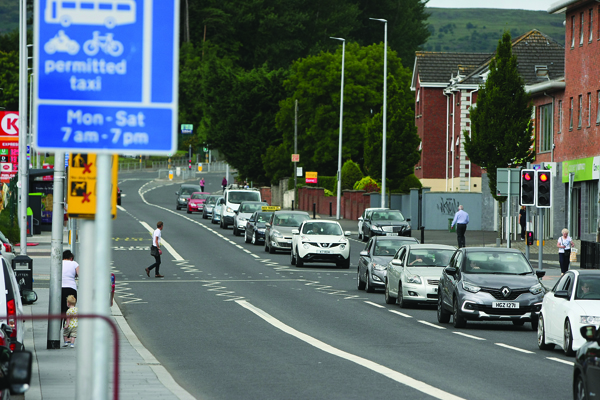 OVER 40 warnings were issued to West Belfast drivers who were caught using the new 12-hour bus lanes brought in to accommodate the new Belfast Rapid Transit (BRT) Glider system.
The bus lanes, which became operational last Monday, operate from 7am until 7pm and were extended to East Belfast yesterday, running from the city centre to Dundonald. ‘Yellow card’ warnings were issued rather than £90 fines, although anyone caught more than once will have to pay for the second offence.
A spokesperson from the Department for Infrastructure said that 43 warning notices were issued during the restrictions’ first week in West Belfast.
“There has been a reduction in the number of illegally parked vehicles as the days go on.”
Business owners along the Falls Road described the introduction of the new system, which is to be become fully operational come September 3, as being “forced upon us” and criticised the lack of “proper consultation” in implementing the new system.