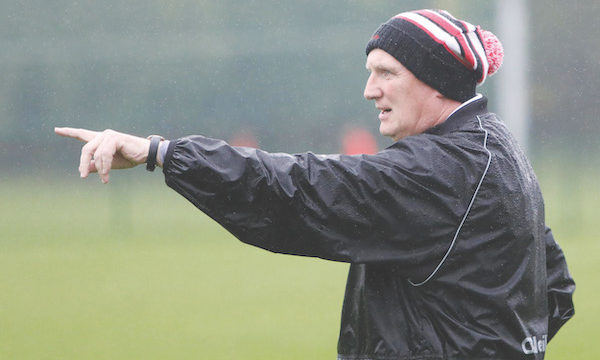 SUNDAY, March 8, may not seem like a date of any huge significance, but it was the day the Antrim all-county leagues saw a round of games that were to prove the last before sport was forced to take a back seat as lockdown took hold.

Four months on and the fields are once again a hive of activity as players, from senior to juvenile, gear up for a return to play in the coming weeks.

Those initial spring fixtures in the second and third divisions of Antrim football are now a distant memory with the forthcoming condensed season rending what has gone before redundant as the leagues will have no promotion or relegation across the board for this year, while some of the divisions will be split into two and no club outside of the county will compete in hurling for 2020.

The reason, of course, is that as recently as May, GAA President John Horan admitted that any action would be unlikely this year with social distancing in place, but as lockdown eased, green shoots of light emerged with the Antrim County Board afforded the opportunity to put together a programme of games in league and championship that will see its competitions run-off within a tight timeframe.

Any action is better than none, and while restrictions have eased, there are still many requirements asked of clubs, players, coaches and parents to ensure training and games can take place in a safe environment.

As of last Monday, group training was once again permitted, albeit with a number of restrictions in terms of contact and group sizes, with other safety measures put in place including the disinfecting of equipment, hand sanitiser and indoor pavilions including showers and toilets locked.

Prior to return, members, coaches and parents were required to complete an online e-learning course and fill out declarations regarding any potential Covid-19 symptoms, with each team required to provide a supervisor to ensure all measures are adhered to.

It’s certainly an added burden, but these measures simply must be completed to ensure a safe environment for all.

Of course, some - especially those with family members in the ‘at risk’ category - will still have concerns with the disease still active in the community, but it appears the majority have availed of the opportunity to get back out onto the field after a barren third of the year.

“It was great to be back and a great buzz about,” said Lámh Dhearg minor coach Paul Buchanan.

“I had 15 of 18 minors back with he rest just unable to make it for the first one. I know all of the seniors were back too along with the other teams, so everyone seems to be turning up.

“The only thing is that some might be heading off during the summer to their caravan or holiday homes for a while but you get that every year. The haircuts were a bit dodgy but there was a great buzz.”

Completing the online courses and ensuring each box has been ticked is, as mentioned, a requirement for all with anyone with symptoms required to stay at home.

The Lámh Dhearg coach reports the club adhered to all requirements with the various teams training at the same time kept well within their own zones, and this is a feature that will just have to become part of that ‘new normal’ that has been repeated ad nauseam in recent months.

“We all had to do the e-learning ‘return to play’ stuff and had to make sure the kids sanitised their hands going on and off,” Buchanan added.

“The way it worked with us was the minors had half the pitch, the U16 hurlers had the other half and then the U10s were on the 3G, so all the time the teams were kept in their own zones and all the restrictions were adhered to.

“Kids were bringing their own water bottles and that will be a massive challenge throughout the year, but the first thing everyone was saying was that it was great to be back - no matter of was the parents, kids or seniors.

“I didn’t allow any contact between the players and nobody questioned it, but it was just great to be back on the pitch again.

“The parents were able to use the path around to get their own exercise, so everybody was delighted with how it all went.”

Whilst the Hannahstown club has its own facility, the same can’t be said for Ardoyne Kickham’s who have had the added challenge of awaiting Belfast City Council to open its facilities this week.

The North Belfast club has that added cost to bear as they try to secure enough slots on their home patch of Fennell Park that is also used by other sports.

Club coach Conor Barnes - who is also involved with the Bríd Og hurling amalgamation with other clubs from across the city - says the challenges faced by the various teams have been great and again highlights the absolute necessity for a standalone GAA facility in the north of the city.

“We have had a couple of training sessions with the hurling and it’s gone quite well as we have had decent numbers, but were able to keep everyone separated,” he said.

“But we are nearly two weeks behind every club as Belfast City Council (pitches) weren’t open.

“We were then given something like 48 or 72 hours to book all of our needs when we didn’t actually have fixtures, so you can imagine the difficulties there. It just stresses the point for the need of a standalone GAA pitch in North Belfast.

“Because of social distancing, we need to book more slots as you can’t have as many kids on the pitch at one time, which then means more cost.

“We did ask if the Council would reduce the cost of booking the pitch and were told ‘no’. Off the back of that, it’s reduced facilities as there are no changing rooms or toilets opened so we are paying full whack for three-quarters of a service.

“It’s just what we are faced with and that’s why a standalone GAA pitch is required in North Belfast so we can get used to it when needed.”

Like all, the new feature of e-learning has proved a challenge but with juvenile numbers at an all-time high in Ardoyne, it has been a nice problem to have although it has required the club to search for longer pitch slots to cater for all.

“It’s been quite difficult to coordinate that and put it together,” Barnes admits.

“We’re in a great position now to have over 150 kids registered and that’s not something we’ve had before, so that is a good problem, but it also means we need the extra coaches.

“Once the coaches have been trained in what they’re doing, they have been able to filter it down. It has been difficult to make sure everyone has been doing the online courses, but people understand the need for them.

“We’ve just had to try to coordinate it through Whatsapp groups which is tricky, but we’re making it work.”

There has been much debate, both locally and nationally, as to whether Gaelic Games should have returned at all with some opining that it may have been better to just write the year off.

As it is, there will be action across the board although some still aren’t fully comfortable with Covid-19 present in the community.

“There are some parents who have said they won’t be sending kids back for a while because there is somebody in the house or another family member who is shielding, and they aren’t comfortable with everything happening so soon,” Barnes confirmed.

“There was a school of thought the GAA season should have been abandoned altogether, but once you had that first session back and the lads getting to see their mates in the flesh for the first time, you could see the lift in them mentally and physically and the fact they have that physical exercise having been cooped up is massive for them.”

Part of that Bríd Og amalgamation is St Brigid’s from South Belfast and the Musgrave Park-based club has been another availing of the opportunity to return to the training field ahead of the first round of games next weekend.

The club has enjoyed U20 football success in recent years and will hope those players develop into fully-fledged seniors in the coming years, so the opportunity to continue that momentum has been most welcome, albeit in unique surroundings this year.

Players may have been able to stay in shape over the past four months by way of runs and cycling, but the inability to get together for ball work may have left some a little rusty according to senior football manager, Eunan Conway.

“It’s a bit complicated with the regulations, but it’s the same for everybody and we just have to concentrate on the task as hand to get boys back playing with the ball again,” he said.

“It’s nearly a strange object to them and a bit of a hot potato, but progress is being made and the ice is broken a bit in that we’ve got them back out so we’ll see where we go from here.”

Conway admits it is far from ideal for his players as the pre-season is half as long as usual, but it is just an aspect they must get on with and acknowledged all are in the same situation.

Simply, it has been a huge boost to return to the field and have some clarity as to what the coming months have in store and the St Brigid’s bainisteoir says the positives outweigh the negatives.

“It’s an extra burden but it has been a pleasant surprise to see everyone getting back out again,” he agreed.

“Those fears of returning seem to have gone and the games will be coming pretty quickly now. If you are a medical person, you’d probably say a there or four-week run-in to playing matches isn’t a great thing but we’re not in normal circumstances so we just have to ease to the league gently and not expect too much or them.

“It’s new territory for everyone condensing a pre-season into four weeks so we just have to make the best of it and be content we have a season to get out teeth into when a couple of months ago that seemed highly unlikely - just be thankful for small mercies.

“Everyone was keen to come back and that was a wee bit of a concern to begin with, but nobody has decided not to participate so we can’t be using that as an excuse! We are just hoping everyone stays Covid-free and we can get that season completed.”

It’s difficult to decide whether the past four months have flown by or dragged given the amount of water under the bridge, but with the fixtures about to come thick and fast, all will agree that it’s good to be back with local sport’s return on July 17 now just days away.