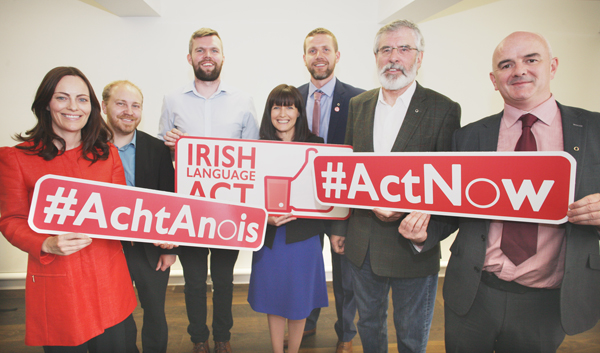 Representatives from five of the north’s main parties have joined Conradh na Gaeilge at the MAC Theatre to make a joint call for a standalone Irish Language Act.

“The message from today’s event is very clear,” he said. “there is widespread, cross-party, majority support for a stand-alone Irish Language Act. Conradh na Gaeilge has been consistently meeting with all parties, five of which now support the community call for a stand-alone Irish Language Act – Alliance, Green Party, PBP, SDLP, Sinn Féin – that support translates into 50 out of 90 MLAs

and an historic majority support within the Assembly for the first time. Given this majority, we now call on those who continue to oppose a stand-alone Irish Language Act to reflect on their position and to acknowledge that the time for change is now.

“Conradh na Gaeilge would like to thank the parties for their support to date but calls on them to continue to stand together for and with the community as the Stormont talks recommence.”

Ciarán Mac Giolla Bhéin, Advocacy Manager, Conradh na Gaeilge, said: “Over 20,000 people have filled the streets of Belfast, Newry and Derry to date this year calling for an Irish Language Act. The support of these five parties reflects what is being seen on the streets as a result of the phenomenal grassroots campaign from the Irish language community. During the most recent of three public consultations on the Irish Language Act in 2015, 94.7% of over 13,000 responses supported legislative provision for Irish.

“This local support, from both the public and political representatives, alongside the support of the Irish Government, that of the Council of Europe and the United Nations, as supported by the NI Human Rights Commission, once again highlights the widespread global support for legislative protection for the Irish language.

“The Irish language community have been waiting too long for the promises made to us at St Andrews to be fulfilled – today we stand together for real change. Acht Anois.”

Speaking at the event Sinn Féin President Gerry Adams reiterated the fact that an Irish Language Act is a red line issue for his party in the ongoing negotiations to reinstate a Stormont executive.

“Let’s be very, very clear; there won’t be any Assembly without an Acht na Gaeilge – the DUP know that, the two governments know that,” he stated.

“This right that has been denied to people here is available everywhere else on these islands. The DUP would be better embracing this, and I understand that there are elements within unionism who are concerned, who feel that this is some way threatening – it isn’t at all.

“It’s a matter of whether we want this part of the island to embrace everyone. You don’t have to agree with everyone, but you have to have a legislative basis for everyone’s rights and that includes Irish speakers, so we’re here to show solidarity with the Irish language community.”

People Before Profit MLA Gerry Carroll called on the DUP to respect the will of the majority of people who are in favour of an Irish Language Act.

“Some sections of the media, and particular parties like the DUP have tried to say that and Irish Language Act is only important to one party or section of the community, and this event shows that is completely untrue.

“The best way to make them realise that is to keep the pressure on them, and the way we are going to achieve that is to continue the campaigns that An Dream Dearg, Conradh, and Glór na Móna have created. The movement that has emerged on the streets is in a very strong position and we need to keep that going.”