Procession tribute to James Moore takes place ahead of funeral 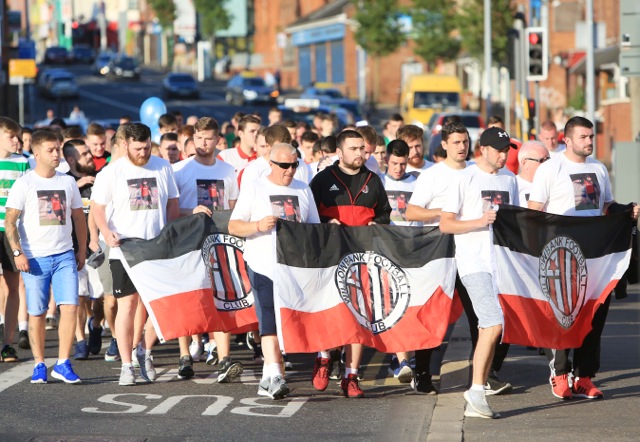 Hundreds of mourners are expected to attend the funeral of football coach James Moore today as the Beechmount community continues to come to terms with the shock of the popular local man’s death.

James was found dead at his Locan Street home on Friday evening after he and his friends had been out for the Linfield vs Cetlic match. He had attempted to get into the game but was refused due to ticketing problems. His death is not being treated as suspicious.

James was soccer coach with Willowbank FC and was well known in football circles having played for Cliftonville, Larne and Donegal Celtic before going into coaching.

Last night James’ friends from Willowbank held a procession and balloon release to commemorate his life. James’ fiancée, Hannah Barnes, has asked mourners to wear soccer and GAA shirts to his Requiem Mass in St Paul’s this afternoon. Burial will take place afterwards at Milltown Cemetery.

“Cliftonville Football Club was deeply saddened to this morning learn of the tragic loss of James Moore.

“A talented midfielder in a successful Cliftonville Olympic side, James left Solitude in January 2013, enjoying spells with Larne and Donegal Celtic before most recently featuring as captain of Amateur League side Willowbank.

“Fondly recalled by his fellow Reds players and coaches, he will be missed not only by his loving family but also those whom he played alongside during his career.

“Everyone at Cliftonville FC extends sincere sympathies to the Moore family circle, as well as his friends and former team mates at this very difficult time.”