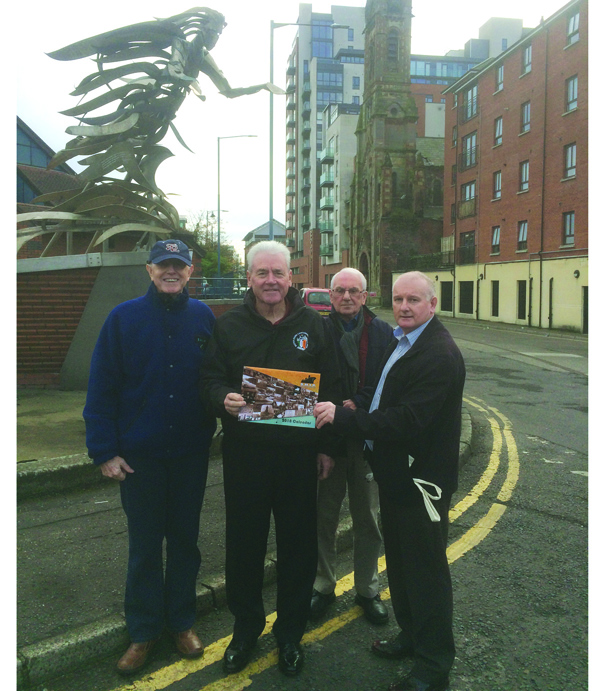 THE red carpet was rolled out in Sailortown for the visit of a delegation of union leaders from the United States.
Terry O’Sullivan, who heads the Laborers’ International Union of North America, was taken on a tour of Sailortown by the Shared History Interpretive Project (SHIP), made up of retired dockers and Sailortown residents.
Terry was in Belfast to learn more about James Connolly’s links to the city, which will be the theme of a new interpretative centre being built on the Falls Road. LIUNA is helping to fund the centre along with Belfast City Council.
SHIP Chairman Liam McBrinn said Terry was a very welcome visitor.
“James Connolly came to Belfast in 1911 and much of his trade union work has already been publicly documented,” he said. “SHIP has uncovered other work, directly connected to Connolly, that we what to show to the public. We have spoken to the committee of the proposed James Connolly Museum and they have asked that we become involved with the museum project. We are delighted to be invited to do so and will help in whatever way we can. It was through our link with the museum project that LIUNA became aware of SHIP and wanted to hear at first-hand what we were doing. After the visit to SHIP we met up with the LIUNA delegation later that day, at a presentation ceremony West Belfast.”
The visit of LIUNA followed another visit from Californian union leader Robbie Hunter earlier this year.
“For SHIP, it was another great day of out outreach work, both at home and across the globe,” said Liam. “To have support and visits from the Presidents of two huge trade union organisations, one in the East Coast and the other in the West Coast of America, with a combined membership of over 1.3 million members, is a great achievement for us.”
For more information on SHIP visit Facebook and go to shipbelfast.