Rossa aiming to Close the gap on Red Hands 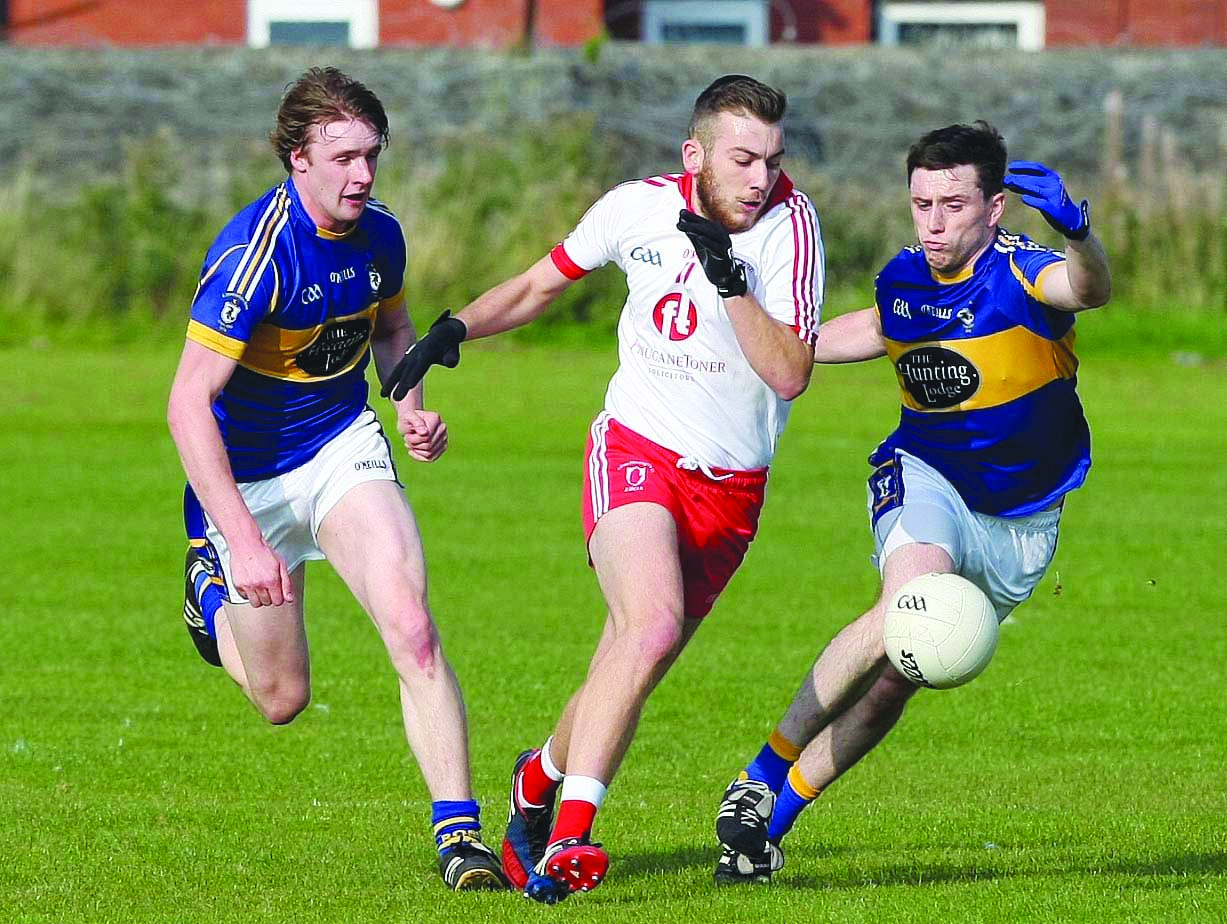 LAST year’s county finalists, Lámh Dhearg will bid to repeat the 2015 success over O’Donovan Rossa when the sides met in the SFC quarter-final at Corrigan Park on Saturday (4pm).

The Hannahstown side claimed a narrow one-point win at the semi-final stage of last year’s campaign before losing out to Cargin in the decider.

This year’s renewal of the Senior Football Championship seems wide open and the eight teams remaining will all believe they have a chance of reaching the county final next month.

However, Lámh Dhearg will have to negotiate the first hurdle minus the services of Paddy Cunningham. Although manager Kevin Murray hasn’t given up hope of the former Antrim captain playing some part, he is less than optimistic.

“The only injury at the minute is Paddy Cunningham,” said Murray.

“He has a problem with his foot. He is doubtful at this stage.

“We will have to see how the week goes but, at this stage, he probably won’t be playing.

“We will just have to go without him but it will be a hard battle with him out.

“He brings a lot of experience both with ourselves and with the county.”

Given his free-taking prowess, the loss of Cunningham would be a big blow for Lámh Dhearg to absorb.

Cunningham was one of his side’s key players as they defeated St John’s, Portglenone and Rossa en-route to the county final last year. While they underperformed against Cargin, Murray is hopeful they learned the lessons from their 2-11 to 1-5 defeat at the hands of John Brennan’s side.

“We were probably disappointed with our own individual performances,” reflected Murray.

“We had a quick review of what we did last year and where we want to go this year.

“We have been working on our fitness and our forward play. Cargin scored two penalties but they had more firepower.

“We aren’t thinking about the Championship final at this stage – the quarter-final is our main focus and hopefully the boys will step up to the challenge on Saturday.”

Murray also insists his side won’t be lulled into a false sense of security following their facile league victories over Rossa earlier in the year.

“I think it is very difficult to read the league results,” added the Lámh Dhearg boss.

“Rossa are a dual club like ourselves and it makes the availability of your players throughout the year for the league games that more difficult. I am sure they will have their full team out on Saturday and it will be a tough game for us.

“Rossa are a formidable outfit and they proved that last year – they took us to the wire. It is probably going to be something similar this year.”

Murray's sentiments about the league form are echoed by his Rossa counterpart, Paul Close.

With 17 dual players, Rossa have had to tailor their training sessions accordingly so the players were not overwhelmed.

Close’s brother, Jim is over the club’s hurlers so arranging the training schedules was straight-forward.

“We targeted specific league games against the teams who have ended up in Division 1B,” stated Close.

“We also had big hurling games following the games against Lámh Dhearg.

“We may have played a weaker hand because we had to save the dual players. We were understrength for the two games against Lámh Dhearg.

“In a way, that could benefit us because they might underestimate us and we owe them one for last year.

“We lost the semi-final by a point but the game could have gone either way.”

Rossa claimed a hard-fought victory over St Brigid’s in the preliminary round with an injury-time winning goal from James Cooley. The club’s focus then turned to last weekend’s senior hurling clash with rivals St John’s and Close is hoping the footballers can continue the winning Championship run going through this weekend.

“There is a great team spirit in the club and we are doing well in both codes,” said Close.

“When we beat St Brigid’s in the Championship, we had to down the footballs for a week and get the hurls in our hands. The win gave us a big boost ahead of a hard game against St John’s.

“Everybody in the county will probably say they (Lámh Dhearg) are favourites. It is going to be a tough game but, within our own group, we believe we have quality players.

“It is going to be a tight game but we feel we have a good chance.”

Close revealed that dual star Conor McClelland will be sidelined for the remainder of the season as he continues to recover from a fractured eye socket and a broke nose while Christopher McGuinness (hamstring) is an unlikely starter.