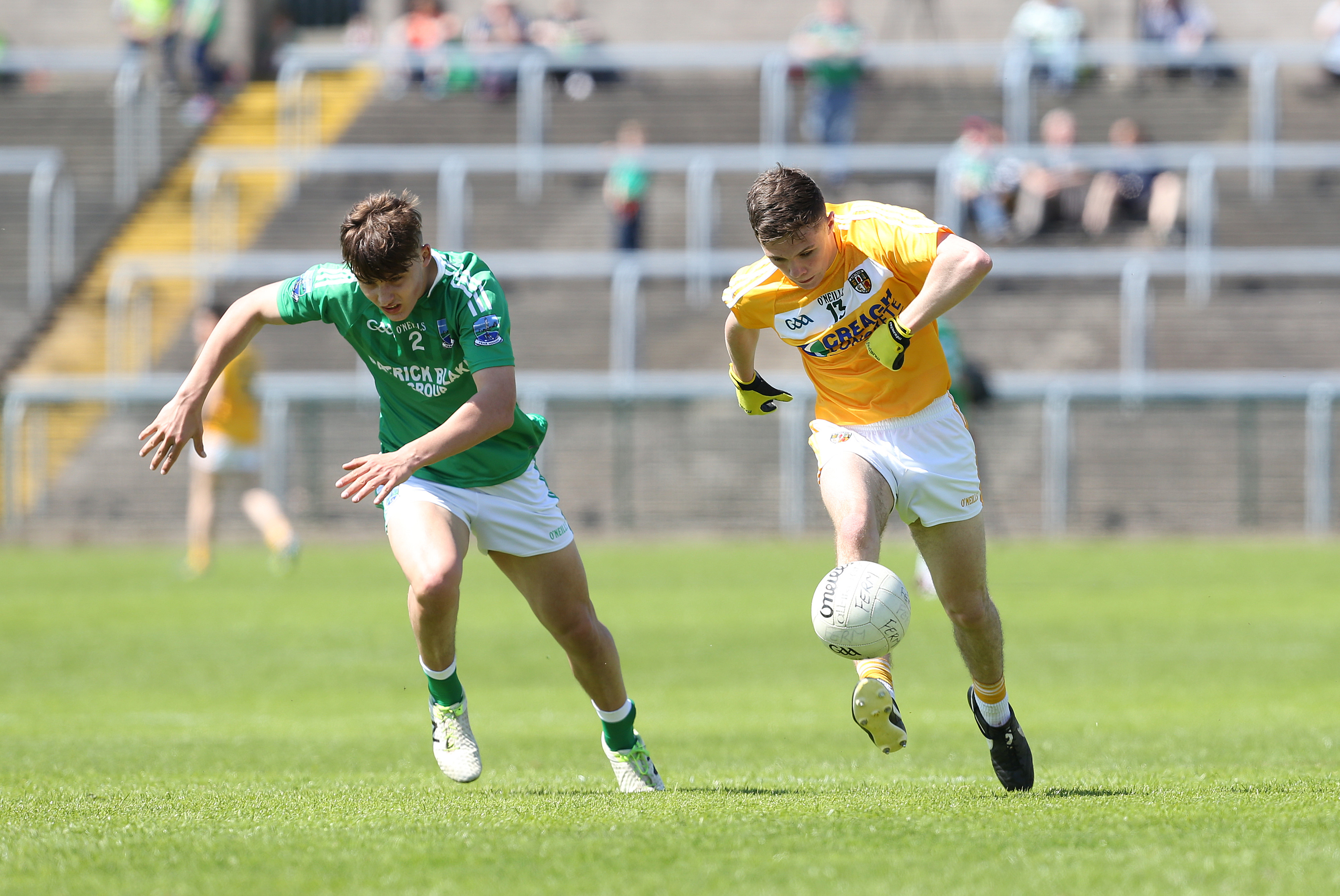 ANTRIM minors face a huge task on Sunday as they bid to overcome Donegal in the quarter-final of the Ulster Minor Football Championship at Corrigan Park.

It will be the first time an inter-county Championship football match has been played in Belfast since Antrim seniors lost out to Monaghan in Casement Park in the Ulster SFC back in 2013.

The Saffrons sealed an impressive 4-10 to 2-9 win over Fermanagh in the preliminary round in Brewster Park less than two weeks ago.

As his players walked off the pitch to a warm applause from the Antrim supporters, manager Hugh McGettigan’s thoughts had already turned to Donegal.
Antrim will have to plan without the services of leading forward Liam Quinn who broke his ankle late in the Fermanagh game after hitting 0-4 from play.

The Creggan attacker landed heavily on his ankle when challenging Fermanagh’s Dara Dolan and a scan at Enniskillen hospital confirmed the seriousness of the injury.

“It is a massive blow for the lad himself and also for the team,” said McGettigan.
“You just hope it is a straight-forward injury and he’ll be back sometime during the summer.

“He was putting a massive effort in. He had some first half. I don’t think too many Antrim players have had that kind of a half in Championship football for a long time.”

He added: “Corrigan Park is a tremendous pitch, it is one of the best surfaces in the country. It will be good for both teams to be playing Championship football on a great pitch.
“We were delighted with that. We have a lot of lads involved in exams over the coming days so that is a big bonus.

“In the first minor fixture in Belfast for a number of years.
“This is the first major football fixture in the city since Casement has closed.”

In Brewster Park, Antrim recovered from the concession of an early goal to lead 1-7 to 1-4 with Michael Hagan bagging a goal on the half hour mark.
Further goals arrived via Eoin Nagle, Dermot McErlain and Kevin Small after the break as Antrim kept the Ernemen at bay.

More will be required against Donegal this Sunday, however.
The Tír Chonaill men are the current Ulster Minor League champions after defeating Tyrone 3-9 to 1-13 in a thrilling decider last month.

Traditionally, the winners of the Ulster Minor League fare well in the Championship with both Armagh and Tyrone using the competition as a springboard to Ulster and All-Ireland success in the last decade.
Antrim also suffered a 2-12 to 1-6 defeat to Donegal at the beginning of the league campaign and McGettigan believes a good start is imperative if the Saffrons are to have any chance of causing an upset.

“We will be looking for a bit of a start. We were disappointed with the concession of the early goal against Fermanagh,” said McGettigan.
“Sometimes it is how a team reacts to it. We would be hopeful that if anything happens, the team would react again in a positive fashion.

“We were able to get a few points after and the goal before half-time set us up for the second half.
“There is a good standard in Antrim but these guys have to improve if they want to be senior footballers for their club and for Antrim.
“That’s what we are trying to prepare them for.”

Having witnessed first hand what Donegal are capable of, McGettigan is pondering what tactics to deploy on Sunday.
In typical Donegal fashion, Sean Paul Barrett’s side mirror the senior team in that they defend in numbers before breaking quickly on the counter-attack.

“We have plenty to be concerned about,” added the Rossa clubman.
“How you break the Donegal system is the problem. How do you go about it?

“Either we play exactly the same as them or try a running game. But whether we have the energy to play a running game against them, I don’t know. It is a difficult conundrum.
“They are very strong and they would see themselves as one of the top teams in the country along with maybe Kerry and Monaghan.

“They would be hopeful of bringing a lot of these guys through to their senior ranks.
“We were pretty much at full strength that day (in the league) and we were very impressed by them.

“They play like their senior team. All their development teams play the same way so that whenever they go into the senior ranks, they know exactly what they have to do. They have a good conveyor belt of talent.”

While Quinn is certainly ruled out, Antrim are also sweating on the fitness of both Eamon Fyffe (illness) and Michael McGreevy (ankle injury) ahead of Sunday’s clash in Corrigan Park.