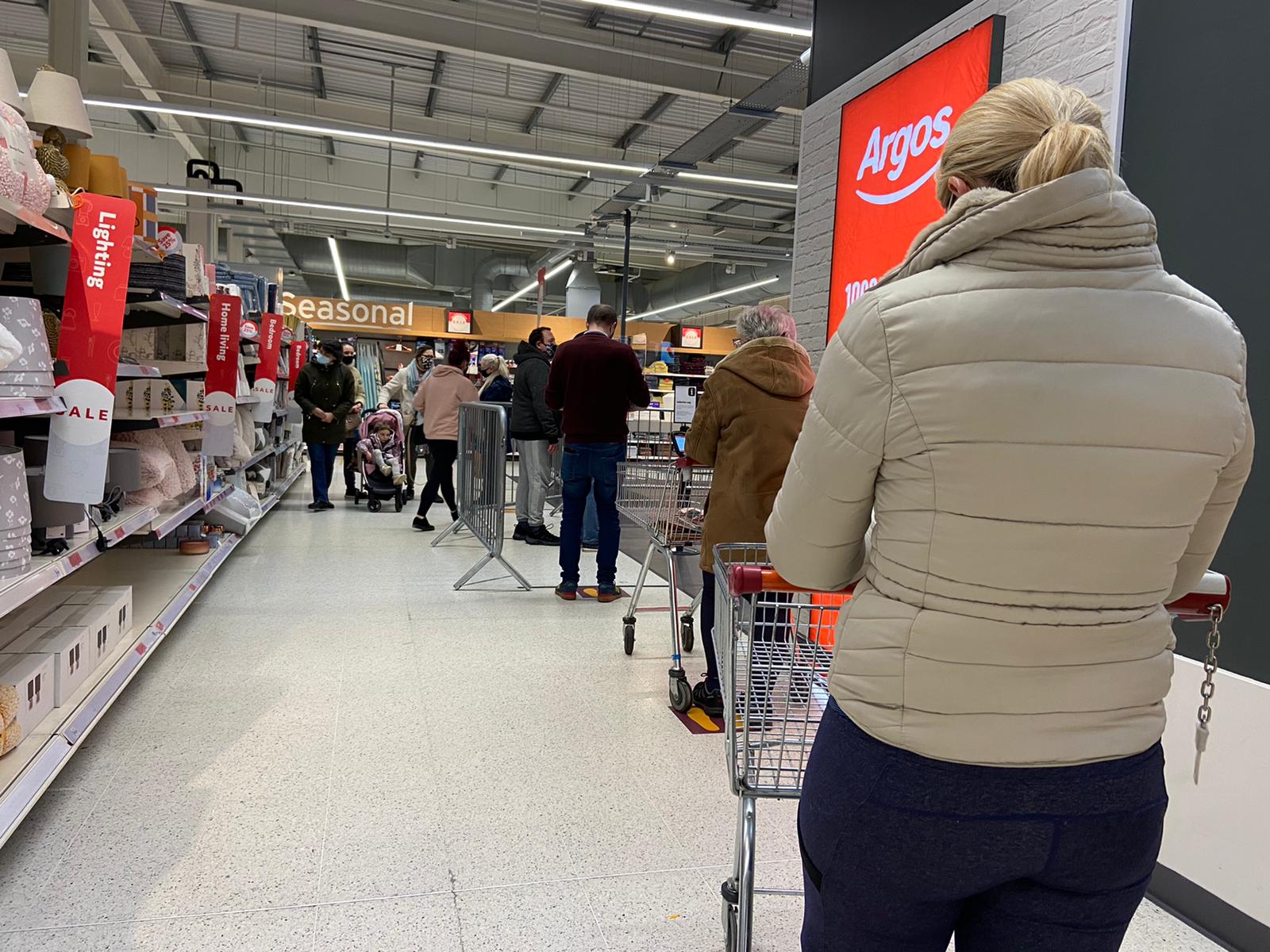 'SELFISH SAINSBURY'S': Customers queue for the click-and-collect service at Argos in Sainsbury's Andersonstown while locally-owned stores selling household items are forbidden to do business - including click-and-collect

Executive ministers met today with the retail giants across the North after claims that they were profiteering during the pandemic — most notably in the case of Sainsbury's which opened an Argos click-and-collect option on a café table.

Following the meeting, First Minister Arlene Foster said:  “As part of our ongoing engagement with partners across society on the implementation of the public health measures we have had a positive and productive engagement with representatives of the retail sector."

Plans for the meeting came after small retailers shuttered under the Covid restrictions said they were being forced out of business by the large stores which are continuing to sell non-essential items. A request by the smaller stores to be allowed to operate a click-and-collect scheme during lockdown was rejected by the Executive.

The executive is to take further advice on whether to change the rules on click-and-collect services for non-essential retail - no change today. Understand Ministers agreed to allow the Covid-19 exec taskforce time to examine the issue and compliance in retail settings

Earlier this week, Federation for Small Business spokesman Roger Pollen said the restrictions lacked balanced and were unfair on smaller retailers who were unable to trade while the supermarket chains were cashing in.

Businesses of all size should be able to offer click and collect services during restrictions - provided they can do so safely. @FSBNIRegion @tinamckenz https://t.co/qWEygwKNfJ

Meanwhile, Sainsbury's has been under fire after Argos opened a click-and-collect option —  from a table in the supermarket café.

Yesterday, First Minister Arlene Foster said some of the larger stores had been behaving in a selfish way — regarded by many as a shot-across-the-bows of Sainsbury's.

Representatives from a number of large stores have been invited to take part.
They include Tesco, Sainsbury's, ASDA, Lidl, IKEA and Marks and Spencer.

In November of last year, Sainsbury's announced plans to cut 3,500 jobs across its UK stores. "Staff in stores across Northern Ireland have gone the extra mile to keep people safe over the course of the pandemic, they deserve better than this," said the Chair of the Assembly Economy Committee Sinéad McLaughlin.