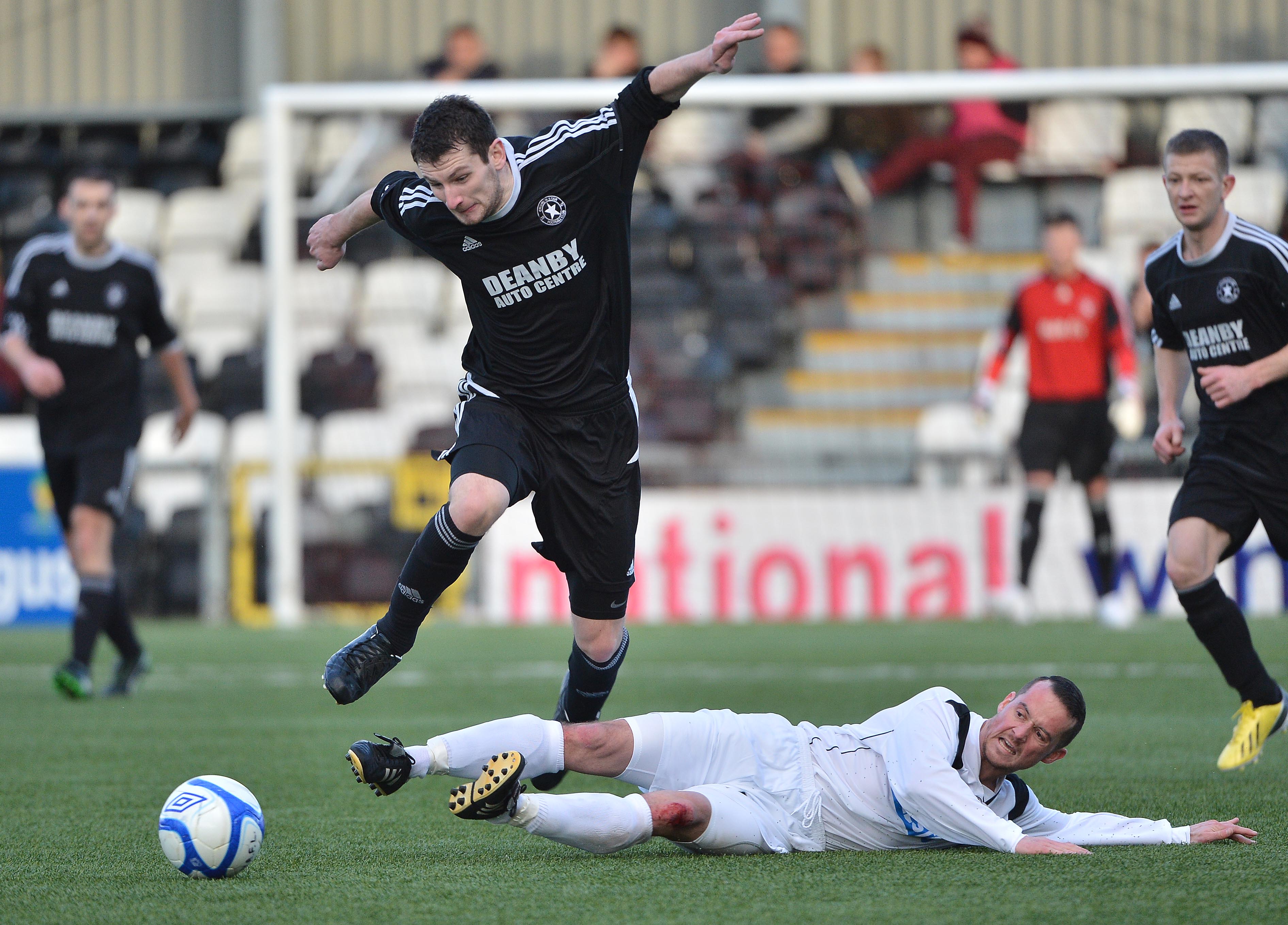 Kevin Trainor will miss Crumlin Star’s Irish Cup clash with Carrick Rangers on Saturday because of a broken foot.

CRUMLIN Star have already made history in the Irish Cup this season, but manager Sean Brown is hoping their fairytale run continues when they take on Carrick Rangers in Saturday’s sixth round tie. As the last amateur team left in the competition, the Ardoyne outfit are 15/2 to cause an upset this weekend and eliminate the Irish Premiership strugglers at Taylors Avenue. Regardless of the result this weekend, Brown says the club have come on leaps and bounds over the past number of years. “If you don’t believe, it won’t happen. We have a great chance of putting Crumlin Star in the quarter-final of the Irish Cup,” said Brown. “Years ago, if you’d have said that to anybody. . . we were stuck in Division 2A with nowhere to go. We couldn’t get out of it. “We were up in Mallusk talking to farmers trying to get a bit of grass to get a pitch on. That’s how far the club has come in the last 10 years. “It would be a fairytale. To get to the fifth round was brilliant. “But Carrick Rangers will see it as a great opportunity for them to get into the quarter-final as well. It will be a big ask.” One of the major problems Crumlin Star have faced this season is the lack of league games. No team in the top four divisions of the Amateur League have played fewer games than Brown’s side who have amassed just five league outings this season. With just the Irish Cup and the Clarence Cup remaining, the Crumlin Star boss is hoping to finish the season on a high and feels his side can still end the year as champions. “Things haven’t changed as far as the league is concerned – that would be our only worry,” said Brown. “The club and the committee are concerned about it. I know that we have the squad to win this league. “We only have the Irish Cup and the Clarence Cup left to go. “If we are lucky enough to stay in the Irish Cup great. If not, we will concentrate on the league. “We actually contemplated pulling out of the Intermediate Cup but we were told that teams get banned from the Irish Cup for two years. “The Intermediate Cup is a massive competition but it take so long to run it off. Then you have the Steel and Sons, the Border Cup and the Clarence Cup. “We can win the league as long we can get the games played before the bright nights come when you are playing Saturday, Tuesday and Thursday. “We don’t want to end the season without winning a trophy.” The Crumlin Star manager candidly admitted he was disappointed that the club didn’t land one of the big teams in the fifth round but his side battled past Oxford United Stars 3-2 to progress to the sixth round for the first time in the club’s history. Brown and his players dreamed of an Irish Cup clash against Cliftonville yet the draw pitted them against Carrick. Despite failing to secure the ideal draw, Brown now hopes the game gets the green light following a series of postponements at Taylors Avenue in recent weeks. “I don’t mean it in a disrespectful way to Carrick Rangers, but we got Crusaders and Ballymena a few years ago and we were maybe hoping it would be the Reds. It wasn’t. It turned out to be Carrick,” added Brown. “I just hope it goes ahead. “We have been talking about fixtures – the last thing that Crumlin Star want is for this game to be postponed. “That would put us even further back in the league. “Carrick are a good side and it will be a massive task to try and go there and turn them over in their own patch. “They played against Glenavon on Tuesday night and I don’t think the pitch was too bad. “Hopefully the weather holds up but it can change very quickly – fingers crossed it goes ahead. Win, lose or draw, we want it played.” Crumlin will be without the services of the injured Francie Murphy (hamstring) and Kevin Tranior (broken foot) for Saturday game while Philip Savage is suspended.