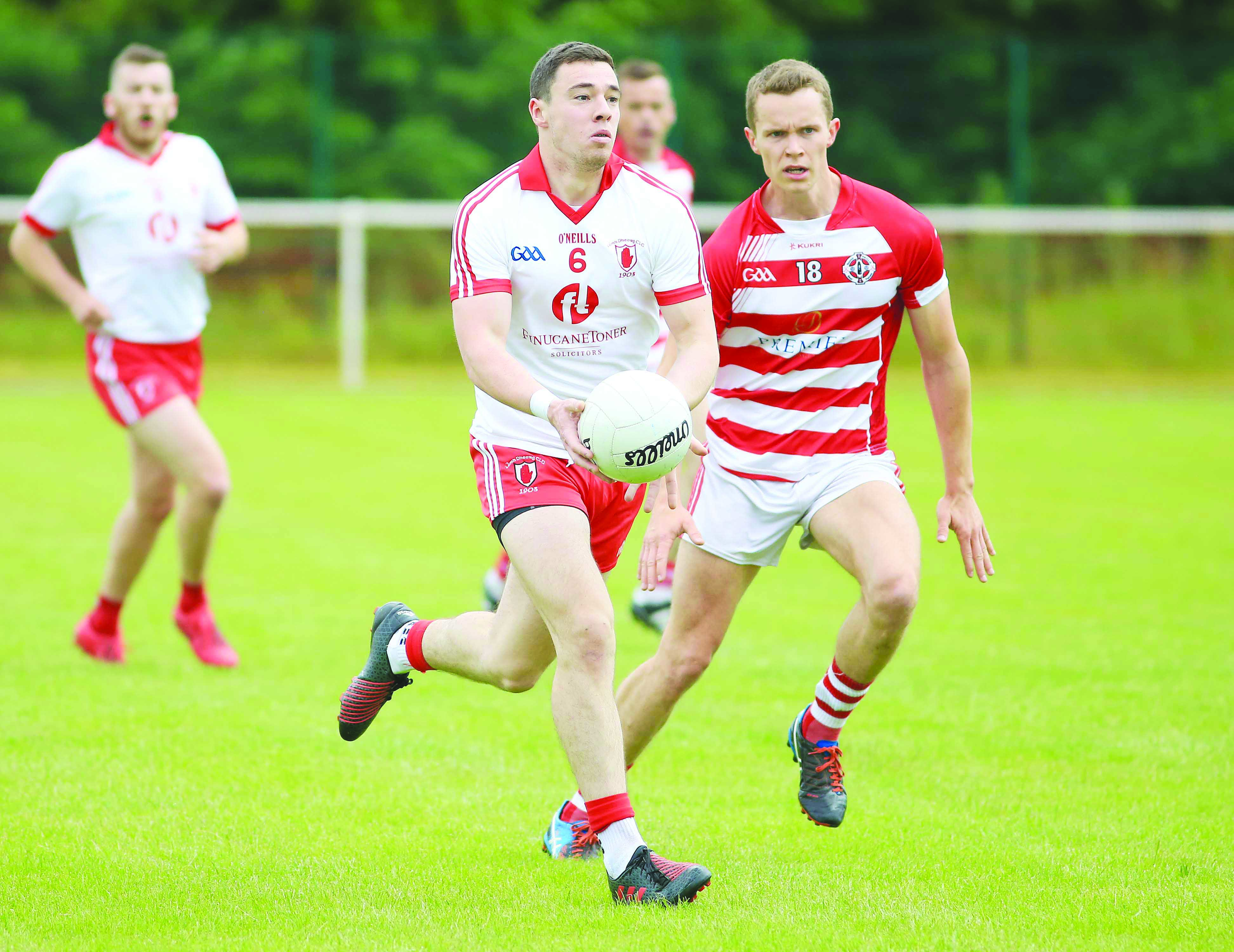 AS they seek to overcome West Belfast rivals St Paul’s on Saturday, Lámh Dhearg will be without the services of two of their star players for the Senior Football Championship preliminary round tie at Corrigan Park.

Antrim players Conor Murray and Domhnall Nugent are ruled out for the Hannahstown men who are overwhelming favourites to progress to the quarter-final. Playmaker Murray has been ruled out with a hamstring injury while Nugent remains sidelined after being knocked unconscious while playing for Antrim’s U21s in the ill-fated Ulster semi-final clash with Derry in Owenbeg last month.

Declan Lynch feels the unavailability of key players during the season has been the primary reason for Lámh Dhearg’s inconsistent form.

“There is always a buzz around Championship time and when you are playing your local neighbours, it adds that bit of bite to it,” said Lynch. “We have no right to go into any Championship game complacent – especially after our league campaign.

“This year, we have had a lot of injuries. We have also lost Marc Jordan and Ryan Straney as well as John Finucane. “Conor Murray and Domhnall Nugent have also been out and we’ve struggled for consistency this year.”

While Nugent’s power will be missed in the middle third during Saturday’s Championship tie, Lynch fully supports the return to play protocols which have recently been introduced in the GAA.

“He picked up the injury playing for the Antrim U21s and anything to do with the head is a serious matter,” added Lynch. “He has to follow the protocols and the consultant has told him he isn’t ready to go back.

“It is something I am in favour of and it is something that needs to be looked at more in the GAA. “Player welfare is the most important thing.”

Lynch has experienced a rollercoaster 12 months with the Red Hands. After suffering a heart-breaking last-gasp defeat to St Gall’s in the semi-final of last year’s Senior Football Championship, Lynch and several of his teammates turned their attention to the Ulster Club Hurling Championship.

Lámh Dhearg won the Antrim Junior Championship with a dramatic victory and went on to seal provincial success. However, their win over Sean MacCumhaill’s of Donegal came at a cost with Lynch one of six players suspended for the All-Ireland semi-final game against Mooncoin. It left the Red Hands massively understrength for their clash against the Kilkenny champions and they suffered a 5-11 to 0-8 defeat in Trim. The hurlers have already exited the Intermediate Championship after losing their 2017 quarter-final to St Enda’s.

“The hurling has brought a bit of pride back into the club,” reflected Lynch. “It was great to be a part of. Obviously, it didn’t end well with the suspension and losing the All-Ireland semi-final, but we still had a great campaign.

“Going back to the St Gall’s game, we just weren’t fit enough on the day and we had a few boys carrying injuries. “We knew it was one we could have won, I am not saying we should have won.

“There have been too many games like that over the last two or three years. That was one that was there for the taking. We have hopefully learned from it.”

“It strikes me as strange when you don’t play a Saturday game all year and then you play your Championship game on a Saturday,” said Finnegan. “We have known about this for a couple of weeks and the boys are back with their clubs. We have to move on and play without them. “Preparations have been going well. We had a few lads away on holiday and they are now back.

“We played Portglenone last Sunday and we shipped five goals which is a worry. “We missed a penalty at an important time and they got a couple of quick goals after that and they game went away from us. “I felt we played well enough and their goals came from our mistakes which is something we are trying to work on.”

After winning promotion from Division Two during their 75th year in 2016, St Paul’s suffered relegation from the top tier in 2017. Despite dropping straight back down, Finnegan insists his side have the quality to pose problems for Lámh Dhearg on Saturday.

“If I get the same performance as I did in the four games before Portglenone, I’ll be happy,” said Finnegan. “It took time for us to settle. We are not as bad as our league position suggests, but we probably do deserve to go down. “We play some good football, but I just think we are a bit naïve. “We have to know when to foul, when to slow down the kick-outs and things like that.

“We don’t want to go ultra-defensive – we have come out of that. “The game has moved on. It is about doing the right thing and winning our individual battles. Even simple things like winning the throw-in. “Get the first point on the board or get the first attack. “There are umpteen things we can do better. It is about getting the better of your man.”