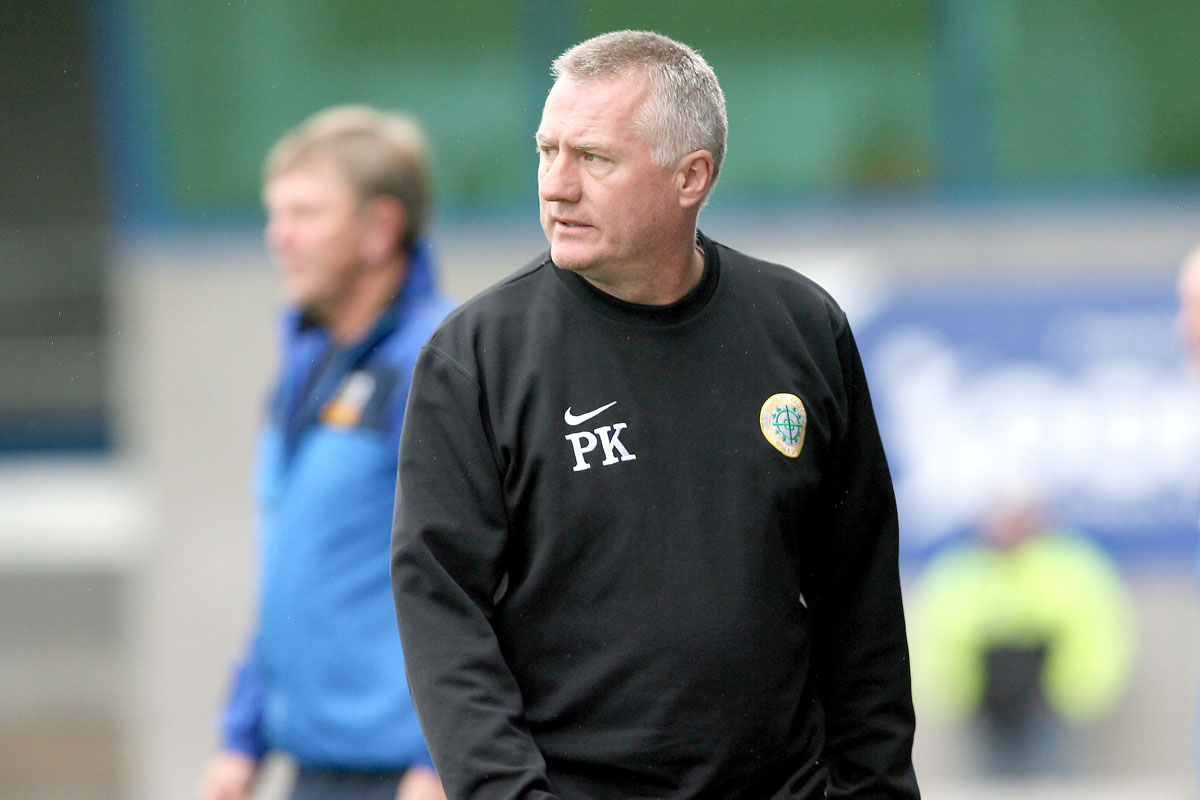 Last Wednesday night we clashed for the first time this season with our bitter rivals Cliftonville at home in the quarter-final of the County Antrim Shield.

Going into the game we were without injured duo Stephen McAlorum (knee) and Paul Bradley (foot), two key players in our squad but we had some young guys chomping at the bit to come in and prove themselves. Paddy Kelly named former Reds legend Declan O’Hara as DC captain for this game

Tommy Breslin named an almost full strength Cliftonville team so both sets of supporters where in for a treat, it was a great turn out by the fans also for a cold and wet Wednesday night.

We started the game the brighter and with only three minutes on the clock Eamon McAllister, who is on fire at the minute, fired a low shot past Ryan Brown in the Reds goal. At this stage some of the supporters were still making their way to their seats.

So it was 1-0 to the hosts but this experienced Cliftonville team were not going to lie down. After the restart Stephen Garrett riffled a fine shot at Robert Robinson who tipped the shot wide.

Declan O’Hara then pulled up with a hamstring injury and was replaced by Darren McNamee, who was making his own comeback from injury.

John Convery then had another chance for the Reds but Robinson dealt with the shot with ease.

Just before the break Ryan Henderson, who was having his own personal battle with Barry Johnston, was yellow carded for a tackle on the Reds man.

Former Crusaders player Martin Donnelly stepped up to take the free kick and unleashed a thundering shot that was destined for the top corner only for the heroics of Robinson, who turned the ball behind for a corner.

Just before the break DC got a corner of their own and Ryan Henderson, who was unmarked, headed past Ryan Brown to make it 2-0.

We went into the break the better of the two teams by far and I’m sure the boss would have been asking for more of the same from the Wee Hoops.

We started the second half like the first and we almost finished the game as a contest early on had Eamon McAllister’s goal not been chalked off for off side.

At this stage Tommy Breslin must have seen enough as he took a massive gamble in a game where extra time and penalty kicks could come into play and made a triple substitution with Liam Fleming, Peter Steele and Darren Stuart all coming on.

It was a stroke of genius by the Reds manager as with his first touch of the ball Darren Stuart fired past Robert Robinson to make it 2-1 and game on.

The momentum was now with Cliftonville and they soon won another free kick.

Martin Donnelly, who was having a great game fired in a very deceiving cross to find Dermot McVeigh, who got the vital touch to make it 2-2.

What was a dream start for Paddy Kelly’s men was turning into a nightmare but what happened next nobody in the game wants to see.

Ryan Henderson, who was already on a yellow card, disputed a free kick decision with the referee claiming that he got the ball. He was given a second yellow for foul and abusive language and was sent off.

Martin Donnelly prepared to take the free kick just outside the box when DC captain Paul McVeigh, who has been a long term hate figure for the Cliftonville supporters, got into an altercation with Donnelly.

The pair clashed heads and where called to the side by referee Stephen Weatherall and, to the general bemusement of everybody in the stadium, both players where given a straight red card and were sent off.

As McVeigh and Donnelly walked off the pair again clashed heads. This then turned into a free for all with the remaining players and management of both teams now on the pitch.

When play eventually continued it was Donegal Celtic who began to pile the pressure on the Cliftonville goal and it took a fantastic block from Convery to deny Darren Murray from giving the Wee Hoops the advantage .

Cliftonville quickly turned defence to attack in the blink of an eye and great vision from Steele played Chris Scannell in, who picked out John Convery who smashed a low shot into the corner of the net and won the game for Cliftonville.

In the dying minutes Darren Murray had the chance to send the game into extra time only for Reds goalkeeper Ryan Brown to brilliantly deny him. This was the last kick of the game and Cliftonville marched on to the semi final.

On Saturday we were back to Carling Premiership duty when we welcomed Dungannon Swifts to Suffolk Road, we went into this game with a huge task on our hands as we where effectively missing the entire Spine of our team.

Centre back pair Paul Bradley (foot), Declan O’Hara (hamstring) and midfielder Stephen McAlorum (knee) were all injured while Ryan Henderson  and striker Paul McVeigh (were both suspended). That is five key players who have all played a key role in our impressive start to the season.

Paddy Kelly gave starts to fringe players Mark Burns and Johnny Gowdy, Jody Lynch came back into the team after missing the midweek game with his parent club Cliftonville.

This game started the same way that it ended with Dungannon on top.

PJ Lavery crossed in a ball that should have been a routine catch for Robert Robinson but the DC ‘keeper fumbled and Michael Ward shot into an open net but Johnny Harkness was on the line to clear the ball.

Minutes later DC’s injury woes continued as Harkness pulled his hamstring and had to go off and was replaced by Niall Atkinson.

From the resulting goal kick Niall Morgan found Dermot McCaffery who blasted a thundering 25-yard strike into the top left had corner of the net giving Robinson no chance at all and it was no less than we deserved. Throughout rest of the first half  PJ Lavery ran our young team ragged and we really struggled against him.

Having so many key players missing for us showed but the players who came in should have put up a better fight.

Just before half time Niall Atkinson did just that when he went in with a two-footed tackle with studs showing on PJ Lavery.

The DC man clearly got the ball but the Dungannon man went down screaming and referee Mervyn Smyth, who had a good view of the incident, issued a straight red card to Atkinson.

I was disgusted with the language of the DC supporters towards Lavery while he was on the ground receiving treatment.

There were women and young children in the home stand and if we want to attract more people to our games this is not the way to do it.

When play restarted the Dungannon man got up and smiled towards the home support as he walked back onto the pitch.

We went into the break at 0-1 down. I struggled to think what words of wisdom  Paddy Kelly could give to his depleted young team.

During half time I bumped into a good friend of mine and local celebrity, the newly-crowned  Mr West Belfast Sean Loughran.

He was telling me that since his new-found fame he is already sick of signing autographs and turning down dates with super models.

As I walked away he shouted after me, ‘you’d better not mention me in the paper.’

But knowing Sean I think

he really meant to say  ‘you’d

better give me a mention in the paper.’

The second half started and again it was all Dungannon for the first 15 minutes.

Johnny Gowdy, who was given the nod ahead of Conor Glenholmes in the DC attack, wasted chance after chance that was gifted to him.

On the flip side Mark Burns was having a solid game at centre back heading everything that came his way.

New signing Jody Lynch, who didn’t have a game to remember, was replaced by Chris Fay as the DC support were calling for the introduction of Glenholmes.

Burns, who up until then had a great game, tried to clear the ball in the box but slipped on the greasy surface and fell on the ball touching it with his hands on the way down.

Referee Smyth was in no doubt it was penalty. Michael Ward stepped up to make it 0-2 to Dungannon.

Late on Conor Glenholmes came on to replace Thomas Lamb but it was too little too late and we suffered our third league defeat of the season.

Up next we have a tricky home tie against an in form Lisburn Distillery in the Carling Premiership on Saturday, 3pm kick off.

Then on Tuesday night we have a potential banana skin situation  in a  home game against Wakehurst in the Iron Bru League Cup, kick-off 7.45pm.