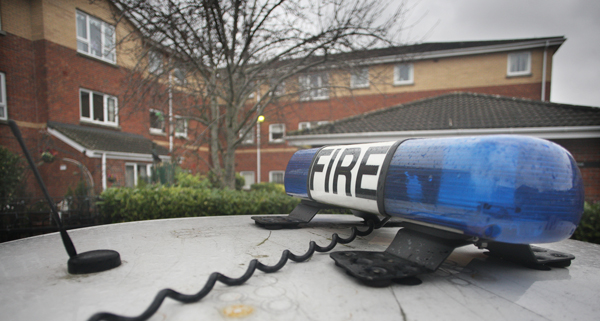 A fire service car at the scene of the fatal blaze

A woman seriously injured in a house fire yesterday afternoon has died in hospital.

The woman, described as being in her 60s, was critically injured in the blaze that broke out around 4pm in the sheltered accommodation on Beechmount Street.

She is understood to have been a long term resident of Ardnaclowney House which provides housing for the elderly.

Local Sinn Féin Councillor Ciaran Beattie said the woman was dragged from the fire by a number of fellow residents, who he praised for their bravery.

“From what I understand two residents went in after the fire broke out,” he said. “The bravery of these men is to be commended. They are heroes in the community.

“The woman was a long-time resident in the home and our thoughts and prayers are with her family.”

The woman is understood to have suffered severe burns with three other residents treated at the scene for smoke inhalation.

The fire is being treated as accidental.

A PSNI spokeswoman confirmed the woman has passed away.

“Police can confirm that a woman has died following a fire at a flat in the Ardnaclowney Drive area of West Belfast.

“The fire was reported to police just after 4pm on Sunday 5 February.

“The woman was taken to hospital for treatment to her injuries but died later that evening.”