Woman forced from her home as youths go on a rampage 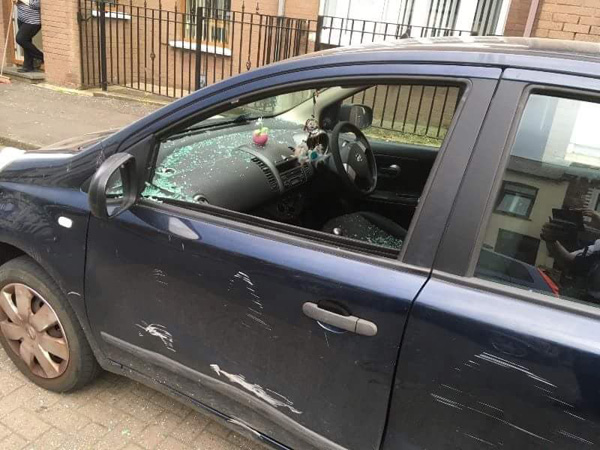 A woman was intimidated from her home in the Oldpark area by a crowd of youths on Saturday night.

Police received a report of burglary and criminal damage at around 21:20 in Brookvale Avenue.

Residents had reported prior incidents of antisocial behaviour to police when a group of around 100 youths began terrorising the area by “banging on doors, drinking and running up and down the street”.

The victim, who is of Sudanese heritage, told officers that the front door and inner door of her home were damaged when a group of youths gained entry.

PSNI Inspector James Murphy said: “The resident of the house, a lady in her 50s, was upset by the incident and police put her in touch with Social Services to make other accommodation arrangements.

“Prior to this incident, officers responded to reports of anti-social behaviour in the same area. We received numerous calls from residents around 7.45pm that a group of around 100 youths were in the Oldpark Avenue area, banging on doors, drinking and running up and down the street. It was also reported that youths were jumping on and damaging cars.

“When police arrived, the crowd of young people dispersed; we believe that they were aged between 13 and 19.

“We are continually issuing appeals, asking parents and guardians to ensure they know where their children are, what they are doing and who they are with. Yet, we are still regularly called upon to attend incidents of anti-social behaviour to deal with young people who are at times gathering up in large numbers.

The majority of young people out enjoying themselves, meeting up with friends over the weekends are well behaved, but unfortunately the behaviour of some is having a huge impact on the community.”

He added: “We have consistently warned that what might seem like fooling about can often result in a criminal record. This can in turn affect future choices and opportunities for young people. It is really important that young people understand this.

“Residents are at the end of their tether with this ongoing behaviour dominating the area at weekends," Mr McCusker said.

“All residents, no matter class or creed, have the right to live in peace, free from intimidation and fear. I would urge the teenagers and young adults partaking in this disruption to stop and think of the
consequences.”