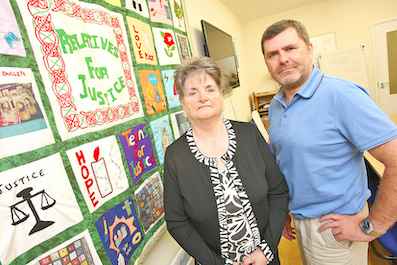 CALLING OUT BRITISH DUPLICITY: Relatives for Justice stalwarts Clara Reilly and Mark Thompson with the victims' Remembering Quilt in 2015.

In 2019 Relatives for Justice made a submission to an NIO consultation on the need for a payments scheme for those injured during the conflict.

In our response we argued for a proper reparations scheme for all those injured and bereaved; the latter a key recommendation made by the Consultation Group on the Past in 2009. Like Robin Eames and Denis Bradley who headed this group, RFJ has always argued that a recognition payment should be made available to all those in need – the bereaved and the injured - regardless of circumstances.

Reparations, financial and symbolic, are recognized as a key component in terms of addressing the hardship felt by those most impacted by conflict as part of transition.

The NIO received numerous submissions to their consultation. Naturally there were differing opinions as to who was entitled centering on those injured whilst participating in an incident; of course the usual exception being the state’s armed groups.

That aside there was general consensus that those who were incarcerated as part of the conflict and who were later injured in completely separate incidents not of their making would be entitled. That was welcome given that these citizens were injured in attacks on them at their homes, places of work or where they socialized going about their legitimate business. Many of these attacks involved official collusion.

In a ‘confidential factual briefing by officials’ between the NIO and RFJ in October 2019, and in discussions throughout, this issue featured prominently with an assurance given that this category of injured would certainly be eligible.

On January 31st 2020 the NIO published the Regulations governing the payments scheme. Despite the assurances and without any indication whatsoever the Regulations contained far-reaching implications – namely that anyone who had served a sentence of more than 30 months would not be eligible. Further, a British secretary of state reserved the right to refuse a payment to anyone they felt weren’t entitled even if they hadn’t served a sentence. Not only was yet another act of bad faith by the British government it also flouts the legal definition as per the 2006 Victims & Survivors Order and therefore discriminatory on a wide scale.

The NIO Regulations provide for an adjudication panel comprised of a high court judge, appointed by the Lord Chief Justice (LCJ), and two lay people appointed by the Judicial Appointments Commission. This panel would then make decisions on eligibility, including those cases where a British secretary for the North could inform the panel where they wanted to refuse an application to which the panel would have due regard.

In reaching an assessment the panel will be issued with specific Guidance by the secretary of state. That Guidance has been distributed to the LCJ, the Victims Commissioner and political parties. Groups working with the injured and bereaved have not been provided with it.

To date the NIO has refused to publish the Guidance.


In short this will be a mechanism to play politics with victims and survivors of the conflict. It will exclude thousands of victims and is a throwback to the failed NIO polices of political vetting. It will be a catchall for the political machinations of the NIO. It will be a platform for the usual hypocritical unionist cheerleaders who despite feigned sympathy for some victims have manipulated them for political ends and who despite their protestations about “terrorism” have defended, rubbed shoulders with, and shared platforms with loyalists.

In the first instance those injured in incidents perpetrated against them and who would normally be eligible but were imprisoned for more than 30 months will be disqualified.

Overall the NIO scheme is pernicious, divisive and vindictive. The NIO have torpedoed the payments scheme much the same way they seek to bin the Stormont House legacy proposals despite their weasel words on reconciliation.