Antrim hoping to build momentum on the road 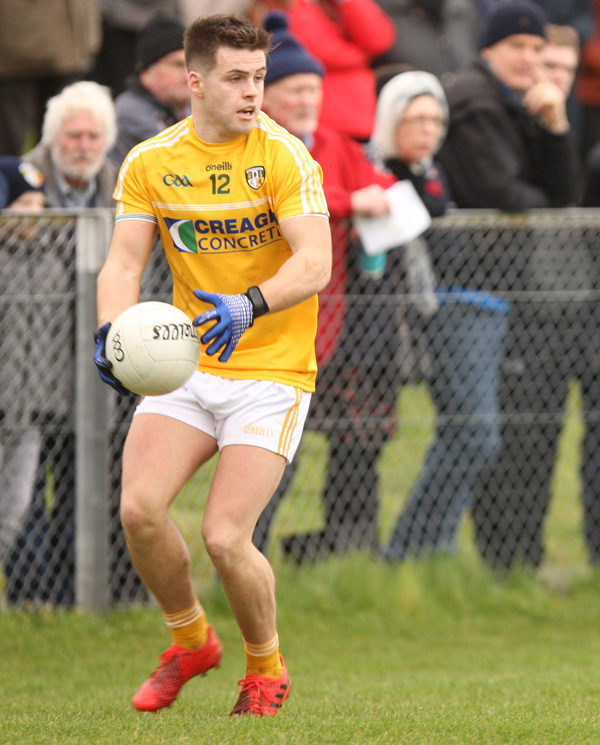 LENNY Harbinson will be hoping to make it two League wins from two when his Antrim team make the long journey south to face Waterford at WIT Arena, Carriganore on Sunday (2pm).

The Saffrons enjoyed a fine start to their campaign at the weekend, scoring an impressive win over Leitrim to get their promotion push off to the perfect start and the St Gall’s clubman will be hoping his players can bag another couple of points in their quest to return to the third tier.

The Decies also got off the mark at the weekend when Jason Curry rescued a draw away to Wicklow and they will be hoping to make home advantage count on this occasion.

“It’s a long journey down to Waterford, but it’s one we’re looking forward to,” said Harbinson.

“It’s a steep learning curve for us and there’s a slight advantage when you’re at home in terms of not travelling long distances and players can stay in their own beds and stick to their own routine.

“This will be a slightly different dynamic, so we’ll try to use those four away matches to our benefit in terms of doing some work with players behind the scenes together when we are together in each of those weekends.”

Division Four can be a series of dogfights with battles there to be won before a game can be, so Antrim will know they will need to dig in on Sunday.

Against Leitrim, they proved they have the class however and with their ability to land scores, they can put themselves in a good position this weekend so long as they perform.

‘I have said a number of times, looking at the calibre of teams in this division, there’s a lot of twists and turns still to go in the League,” warned Harbinson.

“Everybody is capable of taking points off each other.”

Harbinson’s first League game in charge couldn’t have gone any better as his side showed the quality in attack and discipline in defence to score an impressive win over Leitrim at the weekend.

Paddy McBride was in excellent form in attack, kicking some outstanding scores, but others like Ryan Murray, Conor Murray and CJ McGourty contributed their own fair share also to highlight Antrim’s ability in attack.

He agreed that two points was the be-all and end-all on the day as they look to build momentum throughout the campaign.

“The team put a massive effort in, especially in the first half playing in such a swirling breeze,” he noted.

“It was very difficult conditions for both teams. In fairness to St John’s, they had the pitch in great order, especially after so much rain.The first half, I think that was the winning of the game, keeping it tight and we were able to come in at half-time still slightly ahead.

Division Four is a results-based business with the be-all and end-all of amassing points, so whether it’s a champagne display or one where his side squeak home means the same to the Saffrons’ boss.

Antrim have given plenty of reasons for their fans to be optimistic so far this year as their attacking play has some fluidity while the defending and kick-outs appear to have been revitalised.

Putting into practice what has been learnt on the training field is what has impressed Harbinson and he was delighted to get that opening victory at the weekend.

“I’m delighted with the result first and foremost,” he said.

“Even if we won by a point or two, I was just looking for the two points and that was the key thing – winning the match. We put a massive effort in as a panel over the last 10 weeks and it’s great to see some of the things we’ve been working on in training bear fruit today.”