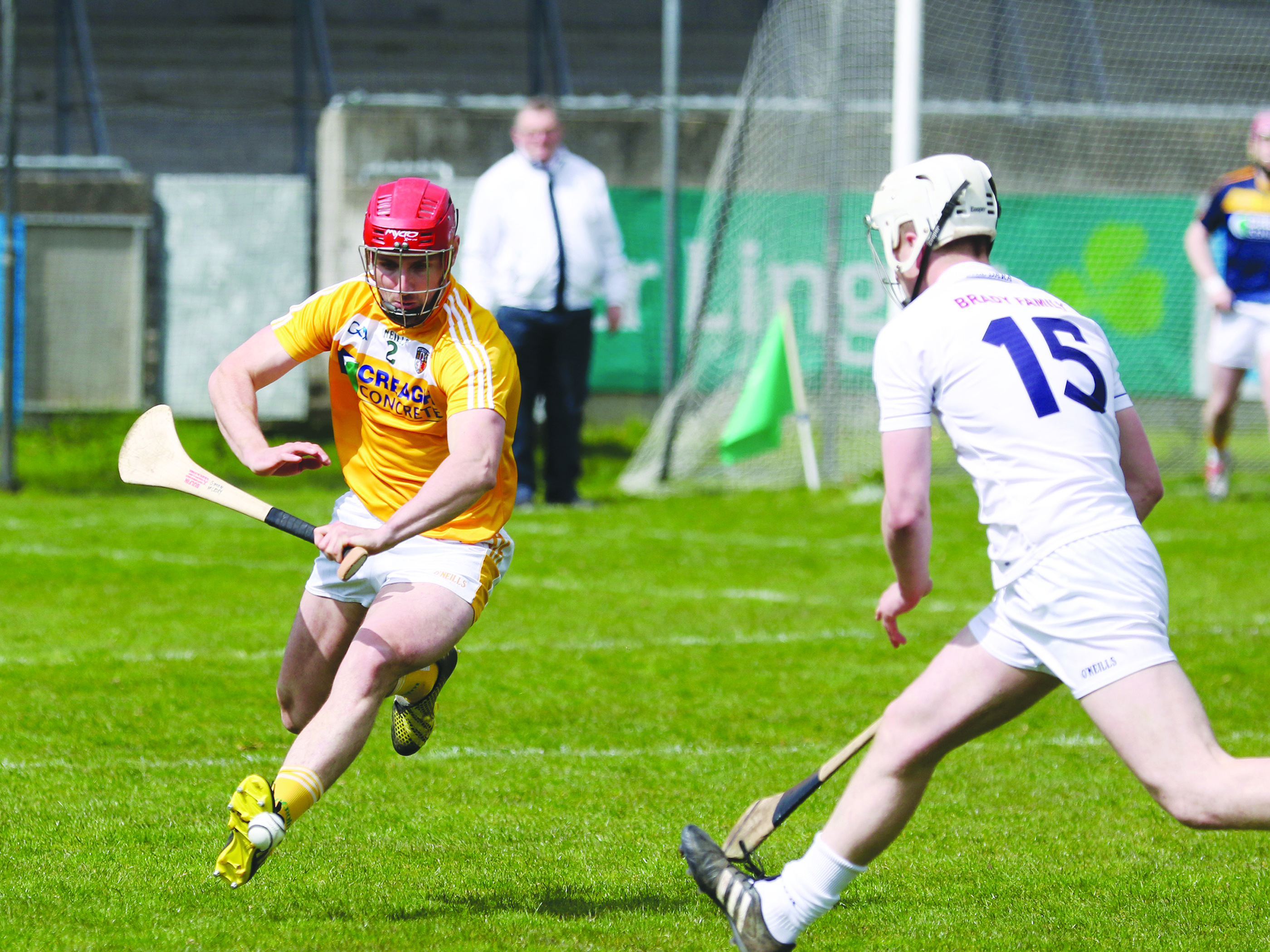 ANTRIM will be aiming for a semi-final berth in this year’s Christy Ring Cup when Roscommon make the trip to Dunloy on Saturday (3.30pm).
The Saffrons had gone into last week’s Round One game against Kildare in a state of flux given the departure of PJ O’Mullan as manager following an unsuccessful league campaign with Terence McNaughton, Gary O’Kane, Neal Peden and Dominic McKinley forming an interim management team ahead of the Ring campaign.
However, they did bounce back with a convincing win in a game that was as good as over by half-time and will take real confidence from aspects of their play.
They will look to build on that victory when the Rossies travel north having shocked last year’s Christy Ring runners-up, Derry at the weekend.
Last year’s Nicky Rackard Cup winners scored an eye-catching 2-20 to 0-15 win to move into Round 2A.
Jerry Fallon was in superb form for the Westerners last weekend, chipping in with 0-7 and will hope for a repeat this week despite being sent off on a second yellow card late in the game.
Thomas Featherstone and Cillian Egan were also on form and will need to be watched closely by Antrim’s defenders, while Jamie Lawlor will be hopeful of a starting place having found the net when introduced at the weekend.
Roscommon are now safe at Christy Ring level for another year, but Antrim’s ambitions are much greater in the competition as they will look to claim the silverware and a return to MacCarthy level and assistant manager McKinley wants his side to do it in the most straightforward way possible.
“If we win next week we go straight into the semi-finals and that's the route we would want to take so this will be important for us,” said ‘Woody’.
“We want that direct route because it would mean we would have a couple of weeks' break and I think we would need that to get them training properly.”
The new management team have had just three weeks to work with the panel and McKinley has praised the players for their efforts despite the disappointing run of form over the past 18 months although he did hint at some changes in the panel ahead to the Roscommon clash.
“We have been training for five or six nights and we couldn't say a (bad) word about them,” insisted the Loughgiel man.
“We're not going to go on about the same old 'everything’s rosy' and that. They are working hard and we're still getting our heads around things.
“Maybe we will get one or two players in and there might be one or two going as well, but we would be happy with the performance and commitment levels.”
Antrim will be sweating on the fitness of Ciaran and Conor Johnston ahead of Saturday’s game.
Conor missed out against Kildare after he injured his ankle in a challenge game the previous Tuesday, while Ciaran was forced to withdraw in the closing stages against the Lilywhites with an injured shoulder.
However, the return of Eddie McCloskey at the weekend was a boost and McKinley is hopeful at least one of the St John’s brothers will be available this week.
“We lost Conor Johnston there before the start and he is a massive loss, but he might be ok for next week,” he predicts.
“Eddie McCloskey just came back from injury there too, so these are the plusses.”
There were several positional changes at the weekend with Simon McCrory moving from his familiar wing-back slot into the corner with Odhran McFadden moving out.
Certainly, Antrim looked a little more solid than their League meeting with Kildare when they shipped three goals and McKinley felt they are starting to get the balance right.
“We have a lot of half-backs that are very forceful and Simon could add to that,” he explained.
“We have other players who could drop in there but it's about getting the blend right.
“The team had a bit of structure there to be honest and having the Cushendall players back helps.”