Belfasters set to play hits by The Dubliners 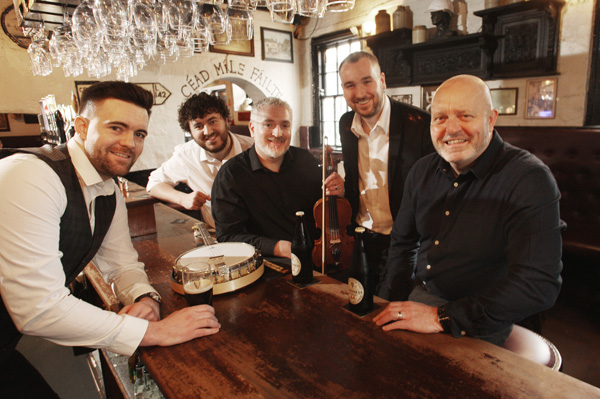 A GROUP of well-known local musicians have joined forces to form a tribute group to the much-loved Dubliners – and are set to play their first gig in West Belfast.

The aptly named Belfasters comprise of father and son duo Seán and Seán Óg Mac Corraidh, Gerard McNeill, Shane McNeill and Stephen Loughran. Seán Mac Corraidh is a popular Belfast folk singer, Seán Óg is of the Rising of the Moon fame, while Gerard McNeill is a singer from The Rapparees. They will be joined by Shane McNeill, a music teacher from St Dominic’s and Stephen Loughran, a well-known flute and whistle player who is just back from touring with the Rhythm of the Dance.

The super group, who have formed as part of Féile an Earraigh will take to the stage on March 16 to perform all the Dubliners classic hits as well as a few Irish language songs.

Seán Óg Mac Corraidh said: “We are all big Dubliners fans and from different bands, so it’s quite a challenge to get this altogether and on stage.

“We have wanted to do this for the past few years and are delighted to be finally doing something about it. We have two of the best folk singers in Ireland, my daddy being one of them, and Gerard McNeill who is the lead vocalist with the Rapparees band is the other one.

“We also have three very good musicians who are just basically trying to replicate the exact same set-up that the Dubliners had – even down to the beards!

“The Dubliners had a famous photo taken in Kelly’s in 1968 so again we have tried to replicate that.”

The Belfasters will be playing on Friday March 16 in the Devenish, which will be a great way to kick-off the St Patrick’s weekend celebrations.

Seán continued: “I came up with the idea a few years ago, it’s something I’ve always wanted to do, so I just brought the idea to Kevin Gamble of Féile and he seemed to love it.

“Féile are celebrating 30 years this year and we thought this would be a great time to kick-off our act, we’ve already been booked for a few summer festivals, so we are delighted.

“Hopefully this is the start of something big and where better to start than West Belfast hence the Belfasters!”

Kevin Gamble, Director of Féile, said: “We are thrilled that they will be paying tribute to the great Dubliners and are looking forward to hearing Seven Drunken Nights, Dirty Old Town, The Auld Triangle and many more classic Dubliners hits ringing out across West Belfast.”

Tickets for the March 16 gig are £5 and will be available to buy from the Devenish. For further information visit www.feilebelfast.com